Nearly matches Hillary 3Q fundraising, with larger donor base, so he can afford national campaign. 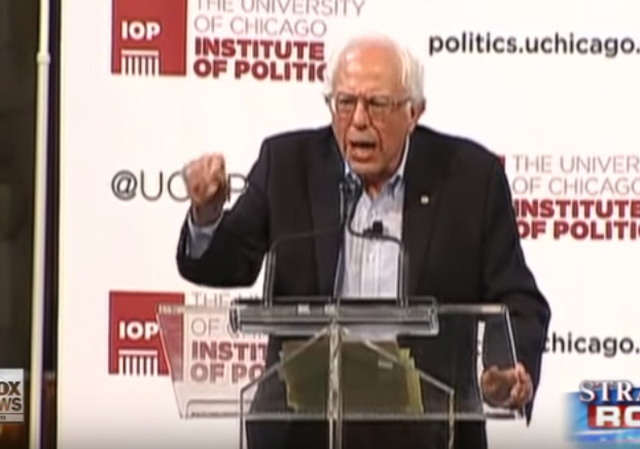 The progressive base of the Democratic Party is voting with their wallets and has pushed fundraising for Bernie Sanders up to the level of the Clinton machine.

Over the last three months, Sanders has come within $2 million of Hillary’s grand total.

James Hohmann and Elise Viebeck of the Washington Post:

So much for the Clinton juggernaut

Hillary personally headlined 58 fundraisers during that time period, the same number as she did during the previous quarter. Sanders only appeared at seven finance events! Almost all of his money came from online.

The disclosures come with fresh evidence that the base of the Democratic Party is not ready for Hillary. Yesterday alone, the Sanders campaign raised more than $2 million online. About $500,000 of that came in from 10:30 p.m. until midnight, according to my colleagues Matea Gold and John Wagner. Sanders has received 1.3 million donations from about 650,000 different donors. That puts him across the threshold of 1 million contributions earlier than Barack Obama in both his presidential campaigns.

The Sanders campaign says it has more than $25 million in the bank. [The Clinton campaign said Thursday morning that it has $32 million on hand.]

What’s Bernie going to do with all of his new cash?

Christian Datoc of the Daily Caller provides one possible answer:

Throughout his 2016 campaign, presidential hopeful Bernie Sanders has emphatically stressed how he has never once run a negative political ad, yet hinted Tuesday that he might soon end that streak.

Sanders, when interviewed by David Axelrod for his “Axe Files” podcast, stated that he still hopes to “never run a negative ad,” but left the door open to possibly changing things this cycle.

“I never have after all these years. But I — we’ll see,” he told President Obama’s former campaign advisor.

Sanders’ flip can likely be attributed to comments recently made by Hillary Clinton. Clinton told MSNBC’s Jake Tapper that “Democratic members of Congress have lined up behind her,” implying that Congressional Democrats will not rally around the senator from Vermont.

I’m not sure if I believe Bernie is going to go negative on Hillary but if it’s true, I can’t wait to see what he comes up with.

Bernie will have to go negative against Ol’ Walleyes at some point to differentiate himself.

Sooner or later. And it’ll be FUN!

I’m not sure this is as much Bernie’s success as Hillary’s failure. I wonder how much Bernie’s support would wane if a viable (viable to Democrats, not literally viable) alternative to Hillary appears. If Biden or Kerry finally dropped in how many supporters would Bernie lose?

I could only hope that both Slow Joe and Jahwn Frickin’ Kerry would jump in. Late. Say in January. Just to mess up the Dems completely.

Meanwhile, the Stupid Party … er, GOP … gets its house in order, tames the GOPe, and settles on a candidate that would bring the battle to the front doorstep of the Dems.