As Hillary’s Numbers Tank, She Hits the Sunday Talk Circuit

As Hillary’s Numbers Tank, She Hits the Sunday Talk Circuit

Claims she’s been “as transparent as possible” about email debacle 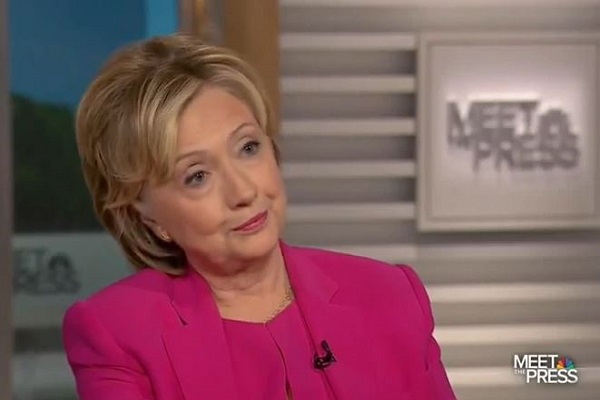 On top of last Monday’s news that Hillary Clinton was underwater for the first time in New York state, polls released today show Hillary still losing ground against Sanders and her favorability underwater in almost all demographics.

Hillary Clinton has lost ground to Bernie Sanders — she leads him by just seven points with Joe Biden in the race, and 15 points without the vice president. That’s down from Clinton’s 34-point lead over Sanders in July and her whopping 60-point lead in June.

. . . . Hillary Clinton is the first choice of 42 percent of primary voters, Sanders is in second at 35 percent and Joe Biden third at 17 percent. No other Democrat gets more than 1 percent.

Some 38 percent of voters view Clinton favorably, down from 45 percent in May.  The downward shift comes from the fact that half of women now rate her negatively.  Positive views among Democrats are also down since May (-11 points).

Overall, a record high 56 percent of voters now have an unfavorable opinion of Clinton.

Earlier this summer, there was a noticeable shift in Hillary’s campaign strategy of not talking to journalists, and her continued decline in the polls is probably at the root of Hillary’s recent interview binge.  After declaring herself “a real person” on Face the Nation last weekend, she appeared on Meet the Press this morning to try to boost her image (and her poll numbers).  However, this may not be working out quite as she’d hoped.

Meet the Press host Chuck Todd set the stage for Hillary to explain her flip flops over the decades by showing a montage of clips from yesteryear.  Hillary, clearly prepared for the video and the line of questioning, assured Todd that her flip flops are not political expediency but are instead the same as Obama’s “evolution” on issues. Watch:

The goal here, I think, is to let her address the issues that matter to the Democrat base—her Iraq war vote, same-sex “marriage,” and the Keystone pipeline—and get them out of the way so she can move forward without them hanging over her head.  What better way to sell this than as the same moves Obama made with such success among the party’s base?

Other segments of the interview didn’t go quite as well for Hillary (here’s the transcript of the interview).  Her claims of victimhood (that vast rightwing conspiracy yet again), transparency, and ignorance didn’t sit well with many viewers, including Ron Fournier of The National Journal and Andrew Stiles of The Washington Free Beacon.

Twitchy has their tweets of disdain:

“I’m not by any means a technical expert. I relied on people who were.” @HillaryClinton throwing somebody under the bus #MTP

“When my attorneys conducted this exhaustive process, I did not participate.” @HillaryClinton throwing somebody else under bus. #MTP

.@BradMossEsq@NoahCRothman at 3min mark: “I was the official. I made those decisions.” https://t.co/rYLlY11bxm

Here is a montage of her many responses to the email scandal:

Her transparency is as clear as mud.

As transparent as possible?

No, your entire intention when establishing a private email server was to obfuscate, most likely because you knew you would be breaking the law by using your position to fund-raise for your “foundation” which spends about 15% of it’s income on actual charitable work. You peddled influence at the highest level of the federal government in order to enrich yourself. But why not? You’ve never been stopped before.

With 30+ years of corruption under your belt, you knew that there would be much to hide, so you setup a private server in violation of government policies. Then, when faced with Congressional investigations, you began your stonewalling dance.

You dragged your feet and when finally faced with court orders, you culled and redacted and then output electronic records to paper to further stymie efforts to understand what you were doing when you were supposedly “serving the people.” So no, you have not been as “as transparent as possible.” Quite the opposite.

You are a corrupt, lying whore, and we want nothing less than for you to shut the fuck up and get out of the public eye once and for all. You are unfit to “serve” in ANY capacity.

Don’t hold back Paul. Tell us how you really feel.
Excellent!

Please don’t leave anything out.

Claims she’s been “as transparent as possible”.

I absolutely believe that.

She’s been as transparent as possible for someone who knows she’s guilty as hell and does not want to be handcuffed and bump her head on the door of the squad car!

Which means she’s been lying through her teeth. NOBODY does not know that.

I’m senior enough to remember when being “transparent” was a bad thing.

Doubt you will see her face Chris Wallace, who might not fawn over her and take those transparent dodges instead of direct answers.

It is an affront to the very concept of equal justice under the law that she isn’t in prison already.

“as transparent as possible” Ah, the qualifier, made by a “real person”!

Let her server speak for itself!

That’s the spin their puttinmg on it:

She laughs – a more natural and milder laugh than before – indicating she doesn’t take any of that seriously, and we shouldn’t either.

And she says the accusations in the 1990s were “proven false,” and has the line that this was disregarded by the voters of New York State when she was elected to the Senate in the year 2000.

She says she didn’t personally decide what were work related e-mails. And yes, she made a bad joke one time.

In answer to a question: The thought never entered her mind that a private e-mail account would be a way to make things more difficult for Congressional investigators or for Freedom of Information Act Requests. And besides 90% of the e-mails were in the State Dep’t poseession (disregarding the fact that they weren’t indexed and wouldn’t be supplied by a subpoena – you’d have to search all e-mail of other people to find hers) and she says they supplied so much e-mail they didn’t need to that the State Department returned 1,200 e-mails.

Mail concerning the Clinton Foundation couldn’t go to her for legal/ehthical reasons. It went to other people at the State Department.

Q? Isn’t the story you told about all secretaries of state being asked for heir e-mails inaccurate?

A. The State Department discovered a problem – it was somewhat gobbledegooky and not an answer to the point.

I see that she’s is a bright and non-threatening bubble-gum pink outfit and softer hair style. My, the magic that Steven Spielberg can work!

Translation: “The buck stops here. It’s entirely my fault for hiring such nincompoops. But I’ll do much better with the power of appointment when I’m President.”

Alternate translation: “What difference, at this point, does it matter where the buck stops. Democrats will vote for me anyway!”

Yo Hill dahlin’, like Detective Arborgast said, “If it doesn’t gel, it isn’t aspic.”

I still predict shrillary will not be the d candidate, but I’m starting to wonder. People may just be stupider than even I thought.

What do people want? She gave 27 different answers! One of them must be right!

The more she is seen by the public the worse her poll numbers will be. The woman is just unlikable

Talking is not her strong suit. Come to think of it, she doesn’t have a strong suit. People want her to STFU and GTFO.

She brings Samuel Clemens to mind, “Better to keep quiet and be thought a fool, than to open your mouth and prove it.”

I love Mark Twain and I love that quote, but I believe that she thinks WE are the fools. What other explanation could there be for her to trot out so many bald-faced lies? The Dims have let her get away with it for decades; why would she stop now?

What has caught Hillary in an inescapable web is the fact that she had at least 200 emails with classified information on her unsecured server. Furthermore these emails were not marked as containing classified information as required by law. She is responsible for this disaster because she ordered her staff to use that server. If Tyrant Obama the Liar doesn’t pardon her then it’s very likely she will go to prison. Can a president serve while in prison?