Bernie is betting on the Democratic Socialist vote, and that vote doesn’t care about Hillary’s server

Martin O’Malley has the vocal quality of elevator music. It reminds me of another voice, I just can’t place it. But there’s not much there there. Jim Webb seemed off-kilter, complaining endlessly about not getting enough time, and not really scoring any points with Democrats by invoking concepts like love of country and a strong military — that will not fly in today’s Democratic Party.

What can we say about Linc Chafee? I thought he had the potential to be aggressive. Those of us who know him from Rhode Island know that while he comes across as a doofus, he can be quite nasty and acerbic. I thought we might get that from him when his opening statement emphasized that he’s never had a scandal and is honest — but he didn’t take the shot directly at Hillary and seemed lost on stage.

In short, none of the three lower-tiered Democrats scored any points and all seemed afraid to confront Hillary. Hillary was, as Mark Steyn puts it, The Alpha Female of a Beta-Male Debate:

It was interesting to me how the Dems’ single-digit losers – Webb, Chafee, Martin O’Malley – were so incoherent and unimpressive compared to the GOP’s single-digit losers – Jindal, Graham, Santorum, even (God help us) Pataki. Last night, to justify their continued presence in the race, one of these guys had to lay a glove on Hillary. Instead, they all wimped out. Tonally, the sub-text of the debate was that these fellows were too scared of her to challenge her: They communicated only their subservience.

But how to explain Bernie Sanders? Hillary went for his throat on gun control, but he didn’t reciprocate.

In fact, the highlight of the night was when Bernie seemed to want to bail Hillary out on her email problems:

It was unfathomable. But made sense from a Bernie strategy point. He has nothing to gain from trashing Hillary on what Democrats view as a Republican talking point.

Plus, Democrats in 2015 like their males Beta, and their females Alpha. This, to them, was a feature not a bug.

Bernie is betting on the Democratic Socialist vote, and that vote doesn’t care about Hillary’s server:

And Bernie may be right. Post-debate, money flowed into Bernie’s campaign precisely because of the email line at the debate:

Sanders raised $1.3 million dollars in the hours after the debate began, his campaign said in a statement. According to his campaign, they received at least 37,600 individual donations.

It wasn’t for lack of trying, though. During the debate, Bernie 2016 emailed supporters touting a joke he made about being sick of Hillary Clinton’s “damn emails.”

“He got the biggest applause of the night,” the email bragged.

At liberal Slate.com, Bernie is killing it in the vote as to who won the debate: 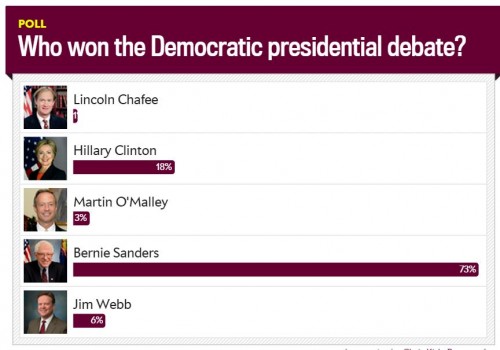 Where it goes, I don’t know.

And here I thought Jimmy Carter was an anomaly. Jimmy is starting to look presidential…only starting. What a sad crew.

It’s not a bad strategy considering the likely makeup of the pool of Democrat primary voters in 2016.

IF/when Hillary is officially nailed, Sanders’ comments will come back to bite him in the butt.

Could we see a Hillary/Sanders ticket? It would cover all the Democratic bases: White/White, and Far Left/Far,Far,Far Left.

I think the whole investigation into Benghazi, and Hillary’s Server, is all political. I think it is driven by Republican hostility to Hillary Clinton and her policies.

So what? Our system is set up to provide exactly that motivation, especially where the executive branch is willing to overlook otherwise-actionable crimes, for political reasons.

General Petraeus and Scooter Libby, for just two prominent examples, were made to suffer the consequences for far less serious security breaches than those committed by Mrs. Clinton. And yet, Mrs. Clinton has been summarily cleared by no less than the President of the United States.

The current President of the United States has a history of interfering with the judicial process, and has shown very clearly that his prejudices do not run toward justice or truth.

So, if there is some sort of poisoned motivation for the Republicans to seek justice where the administration has actively obstructed justice, I have an uneasy contentment.

Spot on. And the national security violations are only scratching the surface… the other crime that Hillary is attempting to hide is the fact that she accepted hundreds of millions of dollars in ‘donations’ from foreign entities which had business before the State Department. Her supposed ‘charitable’ foundation spends less than 20% of it’s income on actual charitable work, the rest is a slush fund which enables her and Bill to live like royalty.

This is happening because the media is allowing it to happen. They do not care about the email. An aggressive and honest media cannot be held back by a President, Senators or Congressmen, or the Courts. They can only be held back by their own lack of integrity. The media has disappeared from the scene except when it comes to Republican scandals. It’s alright to ignore Clinton’s email scandal yet the media clung tenaciously to Christi’s bridge non-issue for months. And they don’t even hide their hypocrisy anymore. They flaunt it.

“Why did Bernie Sanders make love on stage to Hillary’s Server?”

Even though he continues to milk money from his clueless idealistic supporters, he is more realistic than they are and understands that it is unlikely that he will win the nomination. He wants to avoid a repeat of the PUMA spectacle between the Hillary supporters and the Obama supporters in ’08. Besides, his presence in the race has pushed her further left. In that sense he has already won.

I wish i could say I believe the emails will be her downfall , somehow I suspect , she will slide again

Hillary’s server is another Dem scandal. All good Dems want it to disappear.

Watching the video of the moment when the Bern touched the Hildabeast, it reminded me of her Senate campaign debate against Rick Lazio. I am talking about the part where Lazio walked up to her and stood several feet away. Correct me if I am wrong, but didn’t the state controlled media go absolutely ballistic about that? Where is the outrage about the Bern doing that? Oh that’s right, they are both Dems so they get a pass.