They will not be ignored! 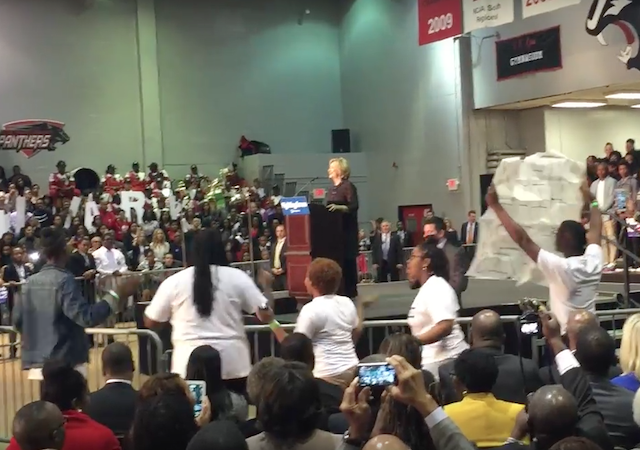 When it comes to social justice, no one is immune to the warriors’ tactics of persuasion—not even Hillary Clinton.

Yesterday, Black Lives Matter protesters interrupted an “African-Americans For Hillary” event with chants of “BLACK LIVES MATTER” and various hymns. Clinton was forced to pause her speech to address the interruption—and of course went into full pander mode.

Rep. John Lewis (D-Ga.) and Atlanta Mayor Kasim Reed went up on stage in a show of support to Clinton.

“Thank you all very much, I really appreciate it, and I appreciate the congressman and the mayor having my back,” Clinton said.

The protesters were eventually removed from the rally.

“So, I’m sorry, you know, I appreciate their passion, but I’m sorry they didn’t listen, because some of what they’ve been demanding, I am offering and intend to fight for as president,” she said.

Clinton was announcing her criminal justice reform plan, which includes a call to end racial profiling in law enforcement.

Her plan comes several weeks after she met with leaders from the Black Lives Matter movement.

Apparently, the promise of a “plan” didn’t stop activists from crashing her big unveil:

Crowd chants for Hillary and John Lewis and Kasim Reed join her on stage. Surreal scene at Clark Atlanta. pic.twitter.com/1pODf0gSb8

BLM activists aren’t just targeting Hillary Clinton. Back at the beginning of August, activists humiliated Bernie Sanders during a rally in Seattle:

A “plan” to reform the criminal justice system didn’t save Bernie, or Hillary, and it won’t save their fellow Democrats from more embarrassing spectacles like this one.

At least we can say that they’ve earned the pleasure.

Well to be fair, there are not a lot of choices for Hillary. On her behavior dial, the only available options are “pander,” “lie,” “obfuscate,” and “cackle.”

You left out the big one…that starts with the letter “b”.

Whoever becomes the GOP candidate for 2016 needs to be ready to deal with these savages. They are Obama’s shock troops, Obama’s Brown Shirts. They’ll try to accomplish what CNBC couldn’t to whomever is running.

Actually, that BLM bunch played her like a Harpsicord! 😉

Except, that old Harpy responded with her usual old sour notes.

It’s all about a set of Collectivist myths, and there WILL be a back-lash from ALLLLLL racial groups in America in the 2016 election.

The humanitarian crisis in Europe caused by mass emigration and unassimilated aliens is a good reference to judge the outcome of the left’s social experiments.

That said, I suppose they have to compensate for the consequences of their selective-child policy under the pro-choice doctrine.

The backlash will be when the newly released prisoners return to a life of crime. The myth is that x-cons clean up their lives and go straight. The reality is that the majority of those released will eventually end up back in prison.

…you have a NEW string of victims…most of them poor and “of color”…left in the wake of people who should have been kept sequestered.

As Heather Mac Donald has shown, these guys are NOT in prison for a minor grass possession one time. That is a complete myth.

They are in prison because they have a long and checkered criminal history, involving many crimes over years. The specific charge that got them incarcerated is just the one that stuck or was prosecuted.

And a lot of the ‘non-violent’ offenders were armed when they were busted, too.

Oh Rags you’re just too harsh. Don’t you realize these folks were just turning their lives around and were probably going to start college in the fall. They coulda even have been obama’s sons.

But that’s all in the past. Everything’s on the up and up now cause half of ’em have become 3x a day bowing on rug religious folks who have a new sense of purpose and values.

Until they protest pro-choice/abortion and planning/cannibalism, their message is lost in their ulterior motives.

Fiddle? The incompetent sociopath looks more like a double bass.

RE: Releasing felons because they are “non-violent” drug offenders….

Just because the conviction that got them incarcerated was non-violent doesn’t mean they are non-violent. Al Capone went to prison on a tax evasion conviction, a “non-violent” charge.

Hanging out with the wrong crowd and all that I suppose.

Nothing, and I mean NOTHING happens at a Hillary event that isn’t planned, staged and paid for.

An organization – the Clinton campaign in this case – spends time and money to arrange an event. In that sense they ‘own’ the event. And then a group like BLM, which hasn’t invested a dime or a minute in the event’s planning and has no permission, contract, or verbal agreement with the event planners, walks in and takes over the microphone and hence, the event.

Isn’t that some form of theft? Is that actionable in any way? Beyond trespassing, I mean? Is it actionable civilly or criminally in terms of theft?

“Conversion” is…very broadly…a civil action against the theft or unauthorized use of personal property against the interests of its owner or lawful possessor. Generally, it does not extend to intangibles.

So there COULD be an action for conversion on the basis that BLM (or someone) took control of personal property from its rightful holder. That would include a rented PA system, for instance.

There are various criminal laws respecting breaching the peace, but I can’t think of anything beyond that.

There may be an action in equity, but all I can think of is a trespass to chattels, which is very like conversion but more limited.

If Hillary addressed NAMBLA, she would promise them little boys.

If Hillary addressed NAMBLA, she would promise them little boys. And that is not the National Association of Marlon Brando Look Alikes (South Park)