US Unites with Pacific Rim Nations on Free Trade Deal

US Unites with Pacific Rim Nations on Free Trade Deal 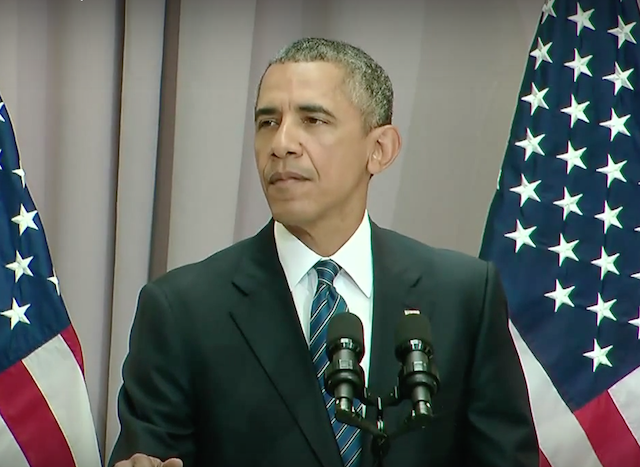 This morning negotiators from the United States and 11 Pacific rim countries announced that they had finally reached an accord on a free trade deal nearly a decade in the making.

For the U.S., the Trans-Pacific Partnership trade agreement opens agricultural markets in Japan and Canada, tightens intellectual property rules to benefit drug and technology companies, and establishes a tightknit economic bloc to challenge China’s influence in the region.

President Barack Obama lauded the trade accord on Monday, saying it would open new markets to American products and set high standards for protecting workers and the environment.
…
After dozens of rounds of negotiations and five days of haggling in Atlanta, trade ministers and other top officials said they resolved bitter fights over intellectual property protection for biologic drugs, automotive-assembly rules and dairy products.

The deal, if approved by Congress, will mark an effective expansion of the North American Free Trade Agreement launched two decades ago to include Japan, Australia, Chile, Peru and several southeast Asian nations.

The trade deal has been in the works since 2008 but has been stymied by politically sensitive disputes, including a fight between the U.S. and Japan over the automobile industry.

This amounts to a huge—and possibly legacy-building—win for Obama, but the wrangling of 11 world leaders may seem tame compared to what’s in store for him in Congress.

The Trans-Pacific Partnership, or TPP, was ripped to shreds by Congressional Republicans who railed against the classified status of the unfinished deal. Officials held TPP so close to the chest that members of Congress wishing to review the deal were unable to even read the words on the page without going through a full security detail, alone, devoid of any technology or even a pen and paper with which to take notes.

The full text of the agreement (think thousands of pages) won’t be available right away, but Republicans are already gearing up for an intense review process.

“… serious concerns have been raised on a number of key issues,” said Senate Majority Leader Mitch McConnell in a statement today. “This deal demands intense scrutiny by Congress and the legislation we passed earlier this year provides us the opportunity to give this agreement that scrutiny. In the months ahead, the Senate will review this agreement to determine if it meets the high standards Congress and the American people have demanded.”

McConnell is referring to the Trade Promotion Authority legislation that caused an uproar in Congress earlier this year. Both hardline conservatives and pro-union advocates opposed the “fast track” procedural bill (for very obviously different reasons,) making for a confusing and convoluted discussion about exactly what was happening between Congress and the Executive Branch.

That being said, don’t expect a literal “fast track” on this. We’re looking at months’ worth of TPA-mandated review in Congress covering concerns regarding intellectual property, manufacturing, tariffs, and currency regulations—which may or may not unravel everything Obama has worked so hard to set in stone.

Thank goodness we have “the most transparent administration in the history of the United States” promoting this agreement. Imagine if the administration had tried to hide the details, the press would have been apoplectic.

Yes sir, transparent government and a free press…that’s what separates us from the bad guys in the world.

Is this a great country or what!?

Is Paul Ryan going to tell us what’s in it now?

McConnell and the GOPe are just puppets of the Global Corporation supporting Chamber of Commerce. So just expect more McConnell GOPe Kabuki theater and phony votes and arguments and then they will find a way to screw the country, screw the GOP base, and pass this thing. Its just that simple.

When I was vacationing in the Ezinooki Islands long ago the term ‘Pacific Rim’ had a sexual connotation.

Oh man, I thought I just thought that but I posted it.

The reasons to oppose this have nothing to do with Free Trade.

Main reason is the bill calls for Open Borders immigration among the twelve nations involved, which include Mexico, and other nations can join it later (Prime Minister of Japan is on record about this).

Further, it calls for an EU style governing body to oversee the whole thing.

Does anyone imagine Obama, or any single Democrat in Congress, actually support Free Trade? Of course not. Their sole interest in supporting this is for reason why the rest of America should be opposed.

So when Chinese farmers can grow crops and sell meat and dairy cheaper than an American farmer can, I’ll end up buying contaminated crap in my local grocery store.

No, you’ll buy good wholesome Australian and New Zealand stuff instead. Cheaper than USAn, but more expensive than the contaminated crap. If your nearest store doesn’t carry it, the next one over will.

First of all, Congress can always do what it wants procedurally with the bill that we are calling TPP. Nothing can tell each part of Congress how it has to process a bill or kill it. Will Congress not follow the agreement with the Executive?–most likely not.

Announcing completion of TPP now means, I think, that the plan is to get it through with the lame-duck Speaker of the House. I hope that is not the case, but then I would have be for a revolt against leadership in both houses before allowing any vote related to a deal for something so tightly held.

I would like to see the House Conservatives placing how this bill is handled as a priority for the next Speaker. Of course, I’d certainly like to actually see what is in the deal too. If it has anything close to what has been reported, I don’t think the public can stomach it, especially right before a presidential election.