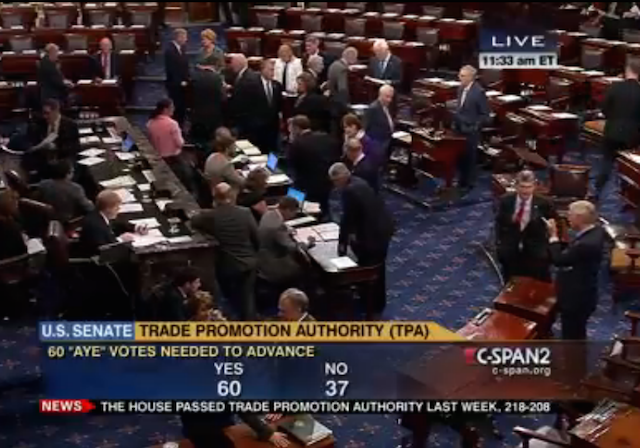 Today, pro-trade members of the Senate won a major battle for free trade after they overcame a liberal filibuster levied against the Trade Promotion Authority (TPA), or “fast track” trade authority.

Coming into today’s cloture vote, analysts weren’t 100% sure that Republican leadership would be able to wrangle both their own caucus, and the 14 pro-trade members across the aisle, into agreement over TPA. Going into the weekend, Democrats remained concerned about shuffling the Trade Adjustment Assistance (TAA) provisions to a separate vote, worrying that Republican leadership would go back on their word to advance the job funding program at a later date.

Also causing frustration for analysts was the sudden flip-flop of Texas Senator Ted Cruz. Cruz, who announced his run for the presidency earlier this year, today changed his vote on TPA from yea to nay in the wake of pressure from tea party lobbying groups.

Still, whatever influence Cruz mustered with his colleagues did not spill over into today’s vote, which was close, but still an important step toward approving the six year fast track authorization.

Strong leadership by Sens. McConnell & Cornyn today. Someone flipping their vote at the last minute after pressure proved irrelevant.

The Senate’s final vote on TPA is expected this afternoon or tomorrow.

After the vote, Majority Whip John Cornyn (R-TX) took to the mic to air his thoughts on the bipartisan nature of Congressional support for TPA:

“Occasionally, the President of the United States gets his policy choices right. And he did when it comes to Trade Promotion Authority, which I would point out to our friends and anybody listening that this actually is a six-year trade promotion authority. This extends well beyond the current occupants of the White House’s tenure and will be available for the next President of the United States to negotiate trade deals that are in the best interests of the United States.
…
… I believe we’ve actually kept the campaign promises we made last year that if the American people entrusted the Republicans with the new majority, we would work together with our allies where we could on the other side of the aisle, where we have common cause, to deliver results for the American people, to legislate in their best interest, not just obstruct for obstruction’s sake or to gain some temporary tactical or political advantage but to promote a functioning, deliberative United States Senate.”

I think he’s right. I’ve seen a lot of writing out there insisting that “if Obama wants it, we must oppose it,” which I think is a terrible policymaking tactic. 99% of the time, Barack Obama backs the most disgraceful, the laziest, and the most buzzword-filled approach to lawmaking; he’s not so much concerned with good policy as he is with legacy building. Since his legacy largely depends on how well he sells the ruin his presidency has become, it makes sense for him to rely on rhetoric.

The problem with treating Obama’s terribleness as dispositive is that it forces us to take our eye off the ball. (The truthfulness of this statement, of course, depends on what you believe your representative’s purpose in Congress is.) If my goal is to advance good policy, I’m going to operate under the assumption that I have a responsibility to read the bill in front of me, not the Twitter timeline of the bill’s sponsor.

Harry Reid’s Senate largely ignored the existence of the two-party system and acted like a rubber stamp for whatever progressive idea came sliding down into the hopper. Mitch McConnell’s Senate actually votes on things—and in the case of TPA, deliberation has revealed that some bills come down to more than just party lines.

Cruz’ flip is evidence that they have the votes to pass it.

“The American people do not trust President Obama. And they do not trust Republican leadership in Congress. And the reason is simple: for far too long, politicians in Washington have not told the truth….

“Pro-trade members”??? More like “Anti-American members” I’d say. A vote for this bill is a vote against American sovereignty and a vote for an all-powerful president.

Have we learned nothing over the past decade about the danger of a too-powerful executive?

Apparently, we’ve learned nothing about the dangers of the leadership of the Republican Party, either.

What an organization of backstabbers.

These are not free trade institutions. They are simply means for BIG fascist businesses to convert tax money to their own use. Fascist economics REQUIRES BIG BUSINESS to partner with BIG GOVERNMENT. And they’re happy to do it.

You know things are screwed up when Hillary the Inevitable says she wouldn’t vote for this bill and you agree with her.

There must be some SERIOUS money being spread around Congress.

So a bunch of corporations are no doubt part of these negotiations, if they aren’t actually writing the agreements. But the American people must be kept in the dark?

Somewhere after Greenspan spoke of the “irrational exuberance” in the markets (1993 or so), we started blowing up bubbles. Financial services became our stock in trade, not real production. Mergers, takeovers, startup DotComs, but we were saved with LTCM bailout of the millionaires whose 300:1 leveraged gambles blew up … too rich and connected to fail. Billions were tossed to Russian oligarchs, who bought villas in Greece with out tax dollars.

http://www.nytimes.com/1998/07/22/opinion/a-needed-but-risky-bailout.html
Greenspan to Congress “hurry up, we need another $18 billion”. Out of our pockets into theirs … taxpayer always on the hook. That Robert Rubin guy was supposedly saving us all, but he floated freely between working for the IMF, the White House, and Goldman Sachs. Which one is really running the world, and for whom?

Housing blew up, we got TARP to save select bank gamblers, and stimulus became a Democrat slush fund, as shovel ready jobs were “not so ready”. Much of that $800 billion was not well accounted for by the big spenders.

Now our currency and markets are propped up with QE and ZIRP, with the global economy still weak and debt too high. For twenty years we replaced hard work and full employment with financial leverage and bailouts, and are becoming a socialist/welfare society, as intended by the left.

But Obama wants more “redistribution” globally, and corporations want to either cheaply produce abroad, or import foreign workers. And that is who will be looking out for American interests? It seems they already plan to trade some of our sovereignty, which is a desire of all good globalists and DC denizens. I remember around 1998 some traders joking that the WH was just a branch office for Goldman Sachs.

Global trade becomes economic warfare, and Obama is not on exceptional America’s side.

“… pro-trade members of the Senate won a major battle for free trade.”

Of course congress will have to pass this EU clone or the world will end, but fear not, they’ll fix it later just like they did with Obamacare.

Personally, I don’t trust the Republicans let alone the President. Lucy, get the football, Charlie wants to play.

“If my goal is to advance good policy, I’m going to operate under the assumption that I have a responsibility to read the bill in front of me, not the Twitter timeline of the bill’s sponsor.”

And the point is … that the so-called “pro-trade members” read the bill while the (by implication) anti-trade members did not? (It may be futile, I grant, to try to find the point in a paragraph composed of non sequiturs. For one thing, how can the “truthfulness” of your statement depend on what I “believe” about a subjective matter?)

The TPA may be read, but of course the bills it would put on fast-track, limiting congressional input, cannot be read except in provisional form, in small bits, in circumstances designed to ensure that as little as possible can be remembered or seriously discussed.

Sure, the TPA would be available to the next president, who may be a conservative Republican, or it may be Hillary Clinton, who seems to have no qualms about selling foreign policy for personal gain. For now, the president is Barack Obama, who still has a good bit of time to take fast-track and run with it, locking us into environmental and open-borders policies he hasn’t been able to get through Congress, and subjecting us to the ongoing power of an open-ended international authority.

We’re being asked, exhorted, shamed, bullied into trusting that Obama, in negotiating the TPP etc. (effectively, treaties) will do the right thing for the United States and the citizens thereof, even though “99% of the time” he “backs the most disgraceful, the laziest, and the most buzzword-filled approach to lawmaking” etc. Sorry, but I’m skeptical.

There’s also the weird suggestion that Ted Cruz fell to the malign influence of the Tea Party, while the yea voters are all supposedly motivated solely by pure principle, without pressure from anyone. They couldn’t possibly be responding to, say, big-money donors telling them how best to keep their campaign coffers full or prepare their post-congressional opportunities. Could they?

I used to enjoy reading LI a lot more. Now it’s often not a case of reading it, but untangling it.

“I used to enjoy reading LI a lot more.”

“Used to” is the key. Prof. Jacobsen’s posts are worth reading, as are those of a couple of other writers. The remaining posts only have value in so far as they give some insight into the entrenched stupidity of the establishment republicans. It’s sad, really. It was a nice little conservative blog for a while.

Hey, Amy, have you read Ted Cruz’s explanation of why he changed his vote? Do you think the reasons he gives — the administration’s dishonesty about immigration consequences; the shady backroom deals regarding the Export-Import Bank — are just a way to rationalize his weak-willed cowering before those villainous “tea party lobbying groups”?

Are Ex-Im lobbyists touchingly selfless and pure as the driven snow by comparison?

Is it ontologically impossible that there would be bipartisanship in Congress on something that benefits the power-brokers but not the American people generally?

Pretty much, yes, he caved to you crazies.

He said he had read the whole thing and Sessions’ fears were mistaken – but that was before he started hearing from all the LIVs he assembled for his small donor base, those dumb enough to think “signing” his “internet petition” would do something against Obamacare besides provide him with their email address.

More proof he’s not a leader.

In other words, you didn’t pay any attention to the specific things he said re: new information emerging about the TPP, and the deal-cutting on the Ex-Im Bank.

And all the Republicans who respond to pressure from lobbyists for the Ex-Im Bank and the open-borders crowd are motivated by the highest of principles.

My Butt hurts more every day.
Why don’t they just drop all the BS and go for the gold?