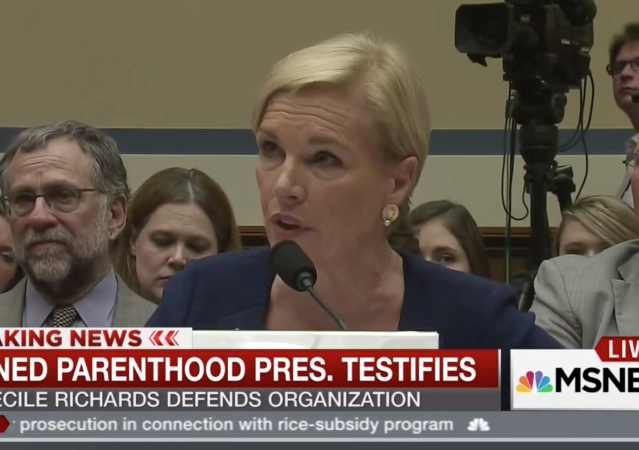 “Texas has stepped forward and shown its unyielding commitment to both protecting life and providing women’s health services,” said Governor Abbott. “The gruesome harvesting of baby body parts by Planned Parenthood will not be allowed in Texas and the barbaric practice must be brought to an end. As such, ending the Medicaid participation of Planned Parenthood affiliates in the State of Texas is another step in providing greater access to safe healthcare for women while protecting our most vulnerable – the unborn.”

According to the Houston Chronicle:

Officials with the inspector general’s office at the Texas Health and Human Services Commission went to two facilities in Houston as well as clinics in Dallas, San Antonio and Brownsville. The Brownsville center does not perform abortions.

The subpoenas asked for a variety of records at many different clinics between November 2010 and September of this year, according to a copy obtained by the Houston Chronicle/San Antonio Express-News.

It is unclear why the inspector general’s office is seeking the records — a spokesman declined to comment — but the effort may be related to the state’s decision to cut Planned Parenthood out of Medicaid.

Friday afternoon, the Associated Press reported at least one clinic received a deadline extension. From the Washington Times:

Planned Parenthood said Friday that at least one Texas clinic is getting more time to answer a subpoena from state health investigators that seeks hundreds of pages of staff and patient records.

Planned Parenthood Gulf Coast spokeswoman Rochelle Tafolla said the clinic now has until Oct. 30 to respond to a request for documents going back five years.

As we reported Tuesday, the Gulf Coast location responded to the Medicaid severance with fundraising emails.

This is going to be interesting. Abbott doing this again means there is something there, beyond what we already know. The speculation is that the medicare fraud may go quite high.

Carving up babies and selling the parts is one thing, but Medicaid fraud? No way they’d do that.

Yep, they’d do that. The Feds got Capone for tax fraud instead of murder, and Texas could bring down PP for Medicaid fraud instead of abortion. And while legions of LIVs could be incited to come out in favor of PP over the abortion issue, it’s going to be hard to work up sympathy if Texas has the goods on PP for fraud.

The doctrine of pro-choice/abortion and economics of Planned/cannibalism of wholly innocent human lives is losing ground.

The bigotry and ulterior motives of the social complex are revealed with the rejection of intrinsic or exceptional value of human life under the State-established pro-choice cult.

Women and men need to make the right choice.

Materialists will “devour” others and themselves to sustain themselves. (That is the historical outcome of Socialism.) But first they must submit their heart, mind and soul to the god of materialism aka the god of well-being and comfort under the rubric of the “common good.”

While some PPH clinics will be affected, the destruction of human flesh, of human flourishing, to justify materialistic “ends” is now a de facto cultural stance and requires a cultural change of heart and mind beyond a change in law.

Hopefully, though, a change in Texas state law will prevent future outcome-based destruction by PPH.