“We are not settling scores. We are wiping the slate clean.” 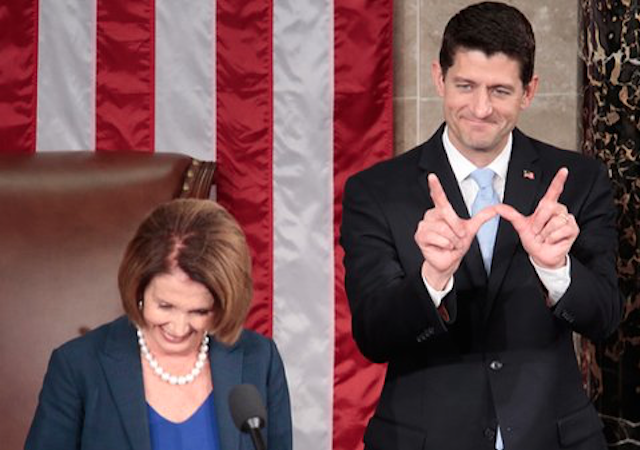 It’s done: Paul Ryan is the new Speaker of the House:

Ryan secured 236 votes for Speaker—far more than the 218 required to win on the first vote. Ryan’s only challenger, Rep. Daniel Webster (R-Fla.), was easily defeated during an internal vote on Wednesday, but managed to field nine nods from his colleagues during the official floor vote.

It was far from an insurrection; but still, here are the 9 who stood up against Ryan’s election:

During his acceptance speech, Ryan acknowledged that, as far as productivity is concerned, he had just inherited a sinking ship.

As he took the gavel after easily winning election on the floor, the Wisconsin congressman declared “the House is broken” and called for a fresh start.

“We’re not solving problems, we’re adding to them,” Ryan said, declaring that going forward: “We are not settling scores. We are wiping the slate clean.”
…
Ryan, though, vowed to do his best to take “the tough issues … head on.” Lamenting that Americans see “chaos” in Washington, he rattled off a to-do list that includes fixing the tax code, growing the economy and paying down the debt. He also called for a more transparent legislative process.

More broadly, he urged both parties to figure out how to work together. “If you ever pray, let’s pray for each other — Republicans for Democrats, and Democrats for Republicans.” He joked, “And I don’t mean pray for a conversion. … Pray for a deeper understanding.”

“We are all in the same boat,” Ryan said.

My friends, you have done me a great honor. Thank you. #SpeakerRyan pic.twitter.com/sLYgmpH1Lv

We even got a little blast from the past:

I think most commentators are right when they say that Ryan is the right man for the job, right now. I have no doubt, though, that Ryan’s first challenge will be to rebuild the trust that has been lost both between members of his caucus, and between the American people and the institution in which Washington continually begs us to place our faith.

That task, I fear, will be much more difficult than reconciling a budget.

Accidentally closed comments on this one. Sorry, kids.

CENSORSHIP! HALP! I’M BEING OPPRESSED! NOW WE SEE THE VIOLENCE INHERENT IN THE SYSTEM! HALP!

A visit from Dennis the Peasant right here at LI!

How did Yogi Know? “It’s déjà vu all over again.”

He became Speaker with the support of Boehner. I expect no change, with the exception of a different complexion [“fake tan” orange is not a good color], perhaps less drinking, and less crying. Obama still does not have an opponent in the House, Conservatives still do, and in any case they have given away every bit of leverage they have by passing a TWO YEAR Continuing Resolution/Debt Ceiling increase. Congress will have no ability to influence anything, other than by unilateral surrender, until the first year of either President Hillary Clinton’s first term, or President Obama’s third term.

They have given us more reasons to vote against Republicans, and still no reason to vote for.

One positive change though.

Obama has lost his golfing and smoking buddy with whom he could claim that the smell of cigarette smoke on his clothes came from the Speaker of the House and not because he was smoking something outside of the White House.

So, now everyone will know who it was who lit up.

Aside from that, little change in the air.

I don’t know if he lost him. They might be able to have more golf outings now. Seriously, the selfie with Romney and then Pelosi looking so happy says it all. Let’s hope for the best but I’m very pessimistic.

If you liked the gang of eight amnesty you’ll love what’s coming.

I suspect the whole Boehner out/Ryan in thing was set up beginning the instant it was clear Boehner wouldn’t survive a challenge, Ryan’s initial hesitance part of the act.

Saying the House is broken, etc., etc., is a little hard to take from a guy who was part of the ‘breaking’ as Ways & Means chairman and VP candidate, and who seems never to have noticed it or cared about it before.

God bless Ryan, and give him strength and insight.

God bless US and the USA for having to put up with a one-party system.

I don’t think he will commit political suicide by trying to pick up where cry baby left off. Give him a chance and lets see what he does.

“Give him a chance and lets see what he does.”

We know what he is going to do, starting with an affirmative vote to give the current administration a blank check.

Clean out the whole nest of snakes.

How about you use your brain and look at what he’s already done and said?

I am not particularly excited by Paul Ryan as speaker of the house. He is a fine man but I am not getting any kind of good feeling. It is done and we can hope for the best.

Agreed, it is done. There is nothing that either the Republican voter or the citizens of the country can do any more to influence things between now and any putative 2016 election. The country’s design margin has been eaten up or discarded. We can hope for the best, but should neither expect nor assume it. And we can prepare to react to the worst. Which should not be surprising, because that is all we have gotten from the Republicans for years.

Whether they realize it or not, if they do not fight Obama and the Left, people have given up on them. Our Republican Congress-critter [12 years] has been a loyal foot-soldier for the GOPe, although he sometimes talks a conservative game. He knows by now that he has pi**ed off his constituents. He has been cutting the notice for his town halls from a week beforehand to 24 hours. And where he used to have an hour for question and answer, he now limits it to 15 minutes at most. And he has been having a real hard time during those 15 minutes.

Before I left the Republican party in 2013 I had campaigned for him, and had been a delegate to his nominating assembly every time except 2010 [fellow TEA Party people got the slots]. I am considering becoming a Republican again just to vote against him in the nominating process. I will not vote for him in the general. And among those I know [mostly politically active types] the feeling is common. If we have elections in 2016, Ryan will end up minority leader if the Republicans do not fight someone besides their own voters.

YOU should run against YOUR CONGRESSMAN.

We will not get change if we don’t.

A fine man? Are you drunk or something? He’s a doosh, a coward, and will surrender like the rest of the R’s.
No wonder Boehner and McConnell and the rest of the idiots in DC are still in office – they have people like you fooled.

He’s got a lot to prove. Doubt he’ll prove it.

All you had to see was Crazy Pelosi smiling.

She was just thinking about his lady parts

I wonder if she’d smile as much around Cruz?

Have you never heard of Dr. Sardonicus…???

THAT is what GOPe “leadership” is accomplishing. Clueless.

Bleep him–at least at home when this happens, I get kissed. I’m so happy the Freedom Caucus listened to Gingrich and DeMint and supported this RINO–so much for principles.
The day after the GOP primary in NY, I plan on going to the Board of Elections and changing my registration to independent.

I was really hoping the Draft Trey Gowdy movement would pick up enough support to make that happen. Ryan may work out just fine, but for several reasons he makes me nervous.