Hillary Clinton’s performance in last night’s debate set off a maelstrom of media filings questioning everything (apparently) we thought we knew about the Democratic primary. Is Joe Biden finished? Did Hillary Clinton just knock Biden out of the running? Is Joe Biden even relevant now?

Personally, I think many of these writers are overstating Clinton’s performance. She sounded strong, but also rehearsed; that being said, nothing we saw last night should shock us. For all her crimes (give it time,) Hillary Clinton was a First Lady, a Senator, and Secretary of State. She knows how to handle herself. Should we use her lack of meltdown as evidence that Biden 2016 is a lost cause?

On the whole, I think not. It’s still too early—and Americans still like Joe Biden.

A Gallup poll released today shows that 49% of Americans still have a favorable view of Biden; this is his best polling performance since Obama’s 2009 “honeymoon” period. 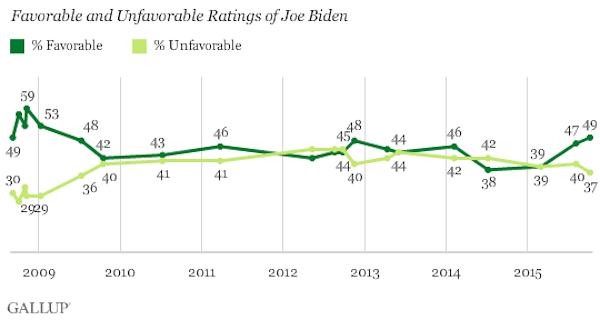 Public opinion of Biden has remained almost consistently split over the course of his tenure as Vice President. Gallup posits that one reason for the uptick could be sympathy for the man in the wake of his son Beau’s death…but of course, there’s always a political reason for a bump in polling.

Another reason Biden’s favorability may be higher is that many Democrats want to see Biden enter the presidential campaign. They may think the Democratic Party needs an alternative to its weakened front-runner, Hillary Clinton, whom Americans currently view more negatively than positively. In stark contrast to Biden’s rising image since March, Clinton’s image has worsened since then.

Right now, Bernie Sanders is Clinton’s closest challenger, but given his admitted socialist leanings, there are questions about his electability. None of the three other announced Democrats has emerged as a credible challenger to Clinton, though that could change in the days after Tuesday’s first Democratic debate.

Biden has gained favorability with key subgroups as well, among them nonwhites, Catholics, and Democrats as a whole: 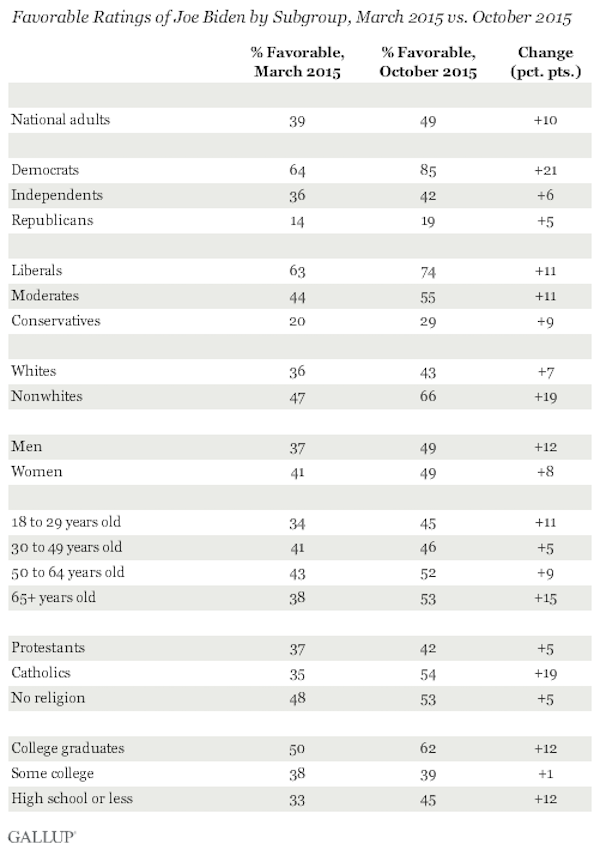 This isn’t a random bump; Biden is trending positive amongst the very voters Democrats will depend upon to decide on the eventual nominee. Gallup’s data cuts off on October 11, a few days before the debate, which means we don’t yet know how last night’s debate will affect his numbers; but it’s a mistake to count him out based on the predictably solid performance of one embattled candidate.

Biden is on the rise—and Hillary Clinton should be asking herself how she can permanently send him back down to Earth.

Obama has every intention of keeping Hillary in the race and Biden out of it. Eventually, after Hillary gets enough to win the nomination, bam, he hits her with an indictment, forcing her out of the race and releasing her delegates. Her delegates, then are free at the convention to choose an unvetted candidate (Michelle Obama).

Sorry, there is nothing whatsoever redeeming about Joe Biden. He is king of the self-serving, corrupt, good-ole-boys. He isn’t some old crazy uncle Joe, walking around bumping into things. He has a matching narcissist personality just like his clean negro friend. He is a legend in his own mind and only surrounds himself with people who agree. “I’m Joe Biden, vote for me because my son died!”

I’m voting for Trump, so it’s no never mind if Biden gets picked. Or the nomination goes to Bernie Sanders. (Not Jim Webb. Jim Webb has a reputation of being a very nasty man. That’s he’s jumped from the GOP is of no significance to democrats.)

And? If Hillary loses … either the nomination … or in a general election … She grabs Michelle Obama into the “can’t win” brigade.

Why is Hillary running? For the money! The saud’s poop cash.

Hillary’s people & the media – to the extent they are in any way separate entities – are desperate to put out the spark in Biden. But as I posited the week of July 4th, when I first predicted Biden would be the nominee, he isn’t going to get in to run against the Clinton Smear Machine. He’s never crossed them yet, and won’t now.

Biden will only enter when she is so damaged by events that the consensus of Democrats is that she could not win the general and might take the down-ticket with her.

Email is far from over, although limiting her Benghazi testimony to one session means they will not be able to question her on her lies, which was Gowdy’s reason for wanting an initial private interview under oath with staff. And the FBI has to come back with something after the prosecutions of several people, including Petraeus and Berger, for far less exposure of classified material.

And the issue of influence peddling is still on the back burner. Dozens of foreign companies – and at least two countries, Algeria and Sweden – had languishing applications before State that were suddenly approved after big donations to the Clinton Foundation. No one who donated was rejected by State. The woman is a career criminal, she will be lucky to stay out of prison.

Biden will only enter when she is so damaged by events

Short of an indictment, I expect they’re worried about her almost inevitable Captain Queeg meltdown on TV.