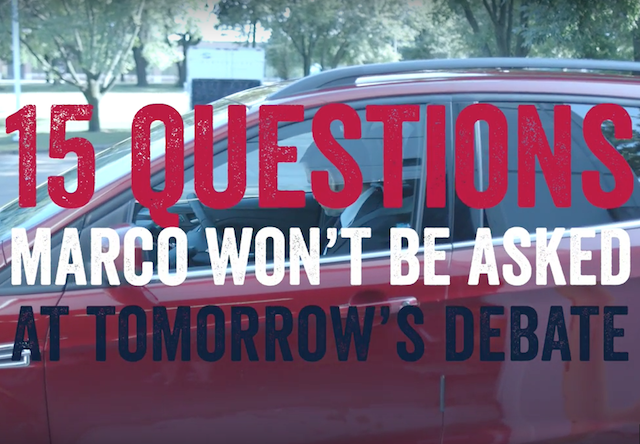 Earlier this year, I used a great deal of digital ink describing why I believe that Marco Rubio has the best digital campaign of the cycle. So far, his team has done the best job stripping down the trappings of campaign life to offer the country an introduction to who Marco Rubio is as a person.

As in, a human being. Embracing our own humanity is important–it’s how Barack Obama managed to connect to his voter base, and it’s Hillary Clinton’s greatest failing as a candidate (and, not ironically, as a human being.)

In their latest offering, Team Rubio takes the same tone they used with their “Top Google Searches for Marco Rubio” ad, but expands their reach to voters looking to connect with a candidate on an everyday level.

He likes Twitter, and hates mushrooms. Prefers Tupac to Biggie. Wants his iPhone back. He loves Christmas, craves Tex-Mex, and would place his faith in Batman in a fair fight against Spiderman. 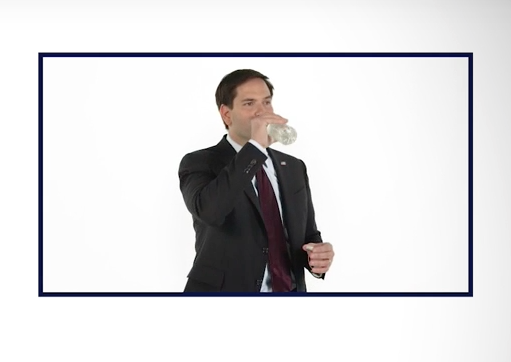 *”Friend”: old enemy you may as well embrace because it’s never going away.

This stuff may seem superficial, irrelevant, or a waste of time, but believe me, it’s not. Americans crave a candidate they can identify with; simply “agreeing with” someone isn’t enough anymore. The world lost its mind when it found out that Barack Obama likes Jay-Z; that fact was important not because rap music is important to public policy, but because it brought an entirely new group of people into the discussion.

Anyone who knows anything about networking doesn’t just walk into a room, pick up a cocktail weenie, and start bombarding the first person they see with their views on health care or education. No—they take their time, introduce themselves, and actually engage in a conversation.

People hate being talked at. It’s condescending and boring and there’s no hope of making a connection. If we insist that our candidates stick to their bullet points and never reveal who they are as living, breathing human beings, we’re wasting our time and money. We might as well vote for Hillary.

Marco Rubio is running a clinic on candidate humanization. Will his opponents pick up their own slack in time for January? It remains to be seen—but if they value a win for Republicans next November, and not just a pyrrhic victory during the nomination process, they need to.

As predicted, more a** kissing schmaltz for Rubio, the serial liar about Amnesty. Bush is struggling, Fiorina is back in single digits so who you gonna call on to once again try to push Amnesty through against the Republican base? How about Chuck Schumer’s boy? He’s got a “real purdy mouth”.

As I have often indicated, Rubio = Establishment’s ‘Jeb version 2.0.’

Jeb is seriously wounded and not likely to come back from his funding disaster.

Meanwhile, over at the Cruz campaign, folks are starting to understand just how brilliant a campaign strategist Ted happens to be. Check out the fund raising charts…

It’s good that you are here to counter the kind of noxious nonsense that shows up from a few of the subalterns here.

They’re pushing Rubio now? Good grief what kind of Kool-aid are they guzzling in the LI break room?

lol, “comments are disabled for this video” immediately pops up. Great display of cowardice by MR and his fluffers.

Afraid of what the base will say eh?

Amy Miller is not “this blog.” There are a lot of co-bloggers here, and they all inject their own ideas, beliefs and –yes– political biases into things. This one author may seem pro-Rubio, but she doesn’t speak for the rest of them.

But a lot of us haven’t decided on our candidate yet, and enjoy thrashing out the good and the bad of a wide variety of candidates. This blog, with its wide variety of co-bloggers, is really good at letting us do that. Even when we disagree strongly with what one author has written.

I agree 100%. My problem is that this article – regardless of whom it supports – is breathlessly shallow, vapid, and naive.

Nothing is more unbecoming than misplaced smugness.

Which is to say, par for the course.

AmyinFla? How about a nice F.O. sandwich, dear?

AmyinFla? How about a nice F.O. sandwich, dear?

I’m pretty sure you just surrendered your right to ever call out anyone else here on their alleged uncivil tone.

For all that you like to complain about personal abuse on this blog, you are actually one of the worst offenders.

In view of recent history of Rubio Posts here, a trend is detectable…

Why Amy darling, whatever do you mean?

Fillet of Onion Sandwiches are good!

You’re not half so cute as you think you are, dear, and not a quarter so clever.

Don’t let that temper of yours get the best of that great intellect you have.

Nothing is more unbecoming than misplaced smugness.

Amy Miller seems to have leaked it…

Oops, the first link is the wrong one…

This one on Carson:

I have no doubt that this will resonate with some folks, especially those who don’t pay a lot of attention to politics (which is probably the majority of Americans…). But some of his constituents in Florida, especially those who worked so hard to get him into that Senate job he claimed he wanted so badly, are feeling a little burned.

It’s not just the “gang of eight” business; it’s not just that we thought we were electing a firebrand Tea Party type to represent our state in the Senate and we’re not really seeing much return for that effort; but more recently it’s that’s he’s not even showing up for votes. I don’t know how many times I’ve heard former Rubio supporters make comments like, “Well if *I* decided *I* didn’t like *my* job so *I* just stopped showing up, *I* would probably be out of a job by now, and sure as heck not still be collecting a paycheck for it.”

Basically, he’s burned through a lot of goodwill down here. Maybe he’ll attract enough shallow voters by being cool & hip to make up for that; maybe he won’t. I don’t think it’s a given, though.

Hit the nail on the head you did!

Rubio can’t get reelected to the Senate and he knows it. That’s why he threw in the towel and started skipping votes he was hired to vote on. He is mad at his electorate.

I see him as a sweaty little weasel who is for sale.

Rubio couldn’t run for both re-election to the Senate and the Presidency. Unlike Rand Paul in Kentucky, that wasn’t even an option for him. And I don’t know if he’s so much “mad at his electorate” as just disenchanted with what it means to be a junior Senator. I get the idea that it’s a lot more grunt-work, and a lot less glory, than he expected it to be.

To me, he’s acting kind of like a spoiled brat. He wanted the Senate; we put him in the Senate; and now he’s pouting because life as a freshman Senator isn’t as grand and glorious as he’d imagined it to be. So let’s go for President now!

But again, a lot of people aren’t even going to see that. They are just going to be looking at the surface, at what’s on Youtube and the Internets, and that might be enough to convince them. One thing there’s no paucity of this election cycle is shallow voters willing to fall for shallow gimmicks, without doing much in-depth research.

Feelz, not thoughts. There’s a lot of that going around.

There is a third RINO who wooed tea party voters as Marco Rubio and Scott Brown have done only to stab them in the back except this one got way-layed in the end by the senate RINO incumbent he was running against taking the write-in path b/c she lost to him in the primary.

Is there anyone who isn’t a “RINO” in your world? This political purity game is getting kind of extreme, especially coming from those flirting with a big government presidential candidate themselves.

Why do you feel you need to care what I think, Amy?

In my paradigm, any Republican who stabs tea party Americans in the back is a RINO.

How many national politicians, who identify as Republican, are RINOs is anyone’s guess but they self identify one way or the other when appearing in the media, eventually.

There is no such thing as “The… Tea Party”

It is a mentality and it a shared mentality amongst many millions of voters.

I have cited multiple sources documenting the juxtaposition of these two candidates by way of the shared mentality of their supporters.

Ben Carson also has a good share of that voter mentality within his support base. I sense that Ben is a strategic candidate to garner like minded Supporters of the same mentality to be passed on to Cruz or Trump in the coming weeks and months ahead.

The GOP will shift right by hook or crook and tea party mentality is the force driving it.

VotingFemale: your views are sound, but your ad hominem attacks wreak havoc with your credibility and actually aid those trying to counter them. Why are you helping?

There is a history of a cluster of commenters here who perform drive by attacks on Supporters of Trump dating back months. It has been vile, nasty, and relentless.

I don’t take crap off these people.

As a follow up, if you support their behavior, then you are one of them.

My modus operandi is to respond to their attacks targeting commenters and responding to attacks on me personally. Once I engage one of these attackers it gets rough.

Either you understand that context or you dont.

Thanks Amy. I got the message and hopefully the candidates will as well. Regardless of anyone’s personal opinions about Rubio, he is exceptionally good at making himself relatable and relevant.