Marco Rubio is doing something different on social media

Marco Rubio is doing something different on social media

A new look for outreach 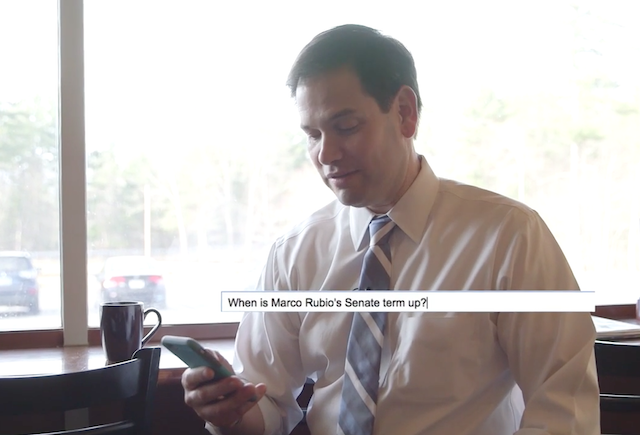 I learned a lot during my time on the 2014 campaign trail. I learned how to “cut a walk book” for a block walk, and organize a phone bank, and juggle 15 reporters, 25 volunteers, and one candidate with one hand tied behind my back; but most importantly, I learned how to create a digital campaign that talks to people, as opposed to talking at them.

People hate being talked at. It’s condescending and boring and there’s no hope of making a connection. You’re wasting your time, money, and most importantly, your face time with a potential voter.

That’s why I was surprised and excited to see one of our already-declared presidential candidates taking a new approach to voter outreach. Yesterday, Team Rubio posted a different kind of video to their Facebook page. Watch it:

This is fantastic. From the music, to the setting, to the tone, everything about this screams “honest and approachable”—which is important in the context of a political campaign, when you have accusations and recriminations firing at you from all sides.

I love this video, and my reasoning has nothing to do with Marco Rubio. (I like Marco, but I’m not ready to hop in the tank for anyone yet. The day is young, friends.) I think that 2016 is going to be a fantastic year for Republicans on a digital front, but content like this is what will keep our candidates and consultants grounded in reality.

What Americans want—and I’m talking about the Americans who don’t normally read Legal Insurrection, or soak in the 24 hour news cycle—is a candidate they can identify with. Obviously, there’s a world of difference between the life, say, my parents live (they’re a teacher and a small business owner, FWIW) and the life that a United States Senator and presidential candidate lives; but identifying with a candidate doesn’t necessarily mean identifying with his lifestyle or career.

The spark we’re looking for happens right at the beginning of this video, when Rubio makes it clear that people are Googling personal stuff about his life. Race? Religion? Twin status? Some people even assume he’s a Democrat. That’s a raw realization; voters may not understand what it’s like to be a candidate, but they do understand what it means to have your privacy violated, or to feel exposed in front of strangers (even if you’re “asking for it” in one way or another.)

The internet asked, and Marco answered—and that’s why this video is important. It draws a stark contrast between himself, and candidates like Hillary Clinton, who never seem to answer anything, and who couldn’t pull off “approachable” if her life depended on it.

Love him or hate him, Marco Rubio is on to something with this. What are your thoughts? I’d love to hear what you think of this tactic, and if you think it speaks to you, your family, and the people in your community.

You’re going to be grilled, Amy.

Rubio is not very popular around here, and you know it. 🙂

That’s fine. Like I said, it’s not about Rubio, it’s about this tactic of stripped-down messaging. I really like it, and it’s a tactic I’ve used, but I’m curious to see how it works with people who are engaged.

They’ll know that if they read the post 😉 #ohsnap!

I found it very effective.

It was very well done, right down to the shirt-sleeved candidate speaking directly to questions people are asking.

Compare and contrast to Ol’ Walleyes in her up-armored handicap van/hearse dashing between plants.

So. We have a candidate who’s reneged on a campaign promise before, plans to embrace Gays, has already again embraced illegals and amnesty, is to the left of Jeb Bush and suddenly they’re politically viable because of “outreach”?

I don’t think so honey. You need to recalculate the equation only this time leave out the emojis and personal attraction.

A campaign should not revolve on how “cool” and “hip” their outreach to those who will most likely never vote for them even though they’re being pandered to at 60 panders a second.

“I don’t think so honey. You need to recalculate the equation only this time leave out the emojis and personal attraction.“

Apparently, Libs don’t have a monopoly on dishing rude and snark at conservative women. Some sectarian Legal Insurrection readers have mastered the art as well.

Sometimes I think I’m a Rottweiler named Rip who sings lead and plays bass in a thrash band.

But I just get some rest and I feel better directly…

But, Mr. Hawkins, you’re talking about a way experienced, in-the-beltway messaging expert. Look, she told you so herself:

“I learned a lot during my time on the 2014 campaign trail. I learned how to “cut a walk book” for a block walk, and organize a phone bank, and juggle 15 reporters, 25 volunteers, and one candidate with one hand tied behind my back; but most importantly, I learned how to create a digital campaign that talks to people, as opposed to talking at them.

People hate being talked at. It’s condescending and boring and there’s no hope of making a connection. You’re wasting your time, money, and most importantly, your face time with a potential voter.”

I must confess, though, I love the irony of the last part and must shake my head at how it apparently has completely escaped the author. For these juvenile posts, we really need emoticons; I could really use an eye-roll right now.

“A New Look For Outreach”

It’s like a candidate is better if he/she delivers lies over an iPhone instead of by fax machine.

So it’s not about Rubio but his messaging, which you summarize: ‘everything about this screams “honest and approachable”’-

Well, perhaps the messaging is honest and approachable, but Rubio is a liar who joined the “Gang of 8” as he broke his No Amnesty promise.

Personally I like the content what he says, but I would never vote for him. I just do NOT trust anything that he says, however good it sounds.

I would argue that he has brought this upon himself (must be before he learned that “honest and approachable messaging” I guess!)

It’s apparently about seeming, not being. This writer does not get it.

I wouldn’t vote for him either, in the primaries, so long as I had people like Walker, Cruz or Rand to preference above him, but I get the point she’s making.

That video is very good. A good use of technology, and connects with people. Cool, low-key, on-point.

How it is advertised/distributed/marketed so people watch it – that is the key to its effectiveness, of course.

I believe that Obama won largely because he was willing to do such things (I personally say “sell his soul” but that’s just me….), to put himself out there on every platform so as to come across as the “new” “cool” “tech-savvy” guy — and that was appealing to the younger voters.

Rubio is not that guy, IMHO, for the GOP, despite this video. However, candidates who follow Rubio’s lead in this type of modern-day campaigning will reap huge benefits, IMHO.

I am solidly behind Ted Cruz. (Yes, I have made that decision this early. For many solid reasons.) Cruz has always been up-front, personal, and active on social media and tech-outreach: FB, Twitter, even Instagram, I believe. I expect he will ramp up more in the social media and tech areas as the days and weeks go on.

Walker, again IMHO, is establishment; he won’t unless the DC consultants tell him to…..and they will kludge it, I believe. Same with the rest, save Fiorina who is a wildcard unknown at this point; none understand or excel in this area, and establishment consultants just don’t have a clue how to use this new, powerful media platform.

Like it. Very much “straight from the horse’s mouth”.

Standard candidate stuff. But I’ve only seen it via this blog, which is the same process as it’s been for 20 years. A video on a blog. I’m in the choir, generally speaking.

The wise voter is a cynical voter, especially since this emits from Rubio who has lied to us before, and the fact is that Rubio chose which google searches to answer – and which to ignore. So, while the ‘tactic’ is newish, the tactic is as exploitable as any transfer of info from candidate to voter. The cynic in me says, “ah, yet another way to pretend you’re honest and forthright and just like the common folks!”

I’m not really sure that that’s a safe assumption anymore. Sad, but true.

Way better approach than a phone bank. There are few things that piss me off more than either a robo call or a unsolicited political call.

Do not use my phone for your campaign purposes without my prior permission. Especially when I am on the do not call list. Hopefully bright candidates will figure out that phone calls alienate far more people than generate warm and fuzzy feelings toward your candidate.

This is a nice introduction that is not intrusive. The link can be passed around, accessed whenever, and, like Anchovy, I appreciate that it is not on my phone.

Given the level of confusion over exactly where he stands [or has moved] on several key issues, seeing him twice shake his head “No” when answering a question in the affirmative is…um…ironic? telling? [likely needs to be coached out]

Guess it could be worse. LONG time ago, had a high school football coach who purposely did the opposite: nodding “Yes” while telling us “NO!” when we asked for a water break.

I could see this as the lead ad in a series of ads that use the same style to answer the questions about his stands on issues, beliefs, etc. Eventually he might get around to his stand on amnesty (today’s and last week’s).

I don’t want a president who is “approachable”. Or, conversely, anyone who thinks (s)he’s celebrity royal fancy. Or any pandering one else with a cultivated “persona” whether folksy or above-it-all.

I love the approach and get Amy’s meaning behind writing about it. However, even though it would be so easy to build on it for further messaging, it is also just as easy to build attack videos off of it. For example, a search on Rubio’s stance on immigration (Marco Rubio on immigration) could have several different answers and a “Googlish” voice would be “Select a date.” or something similar.