Paul Ryan has the Speaker’s gavel, but does he still have conservatives’ hearts? 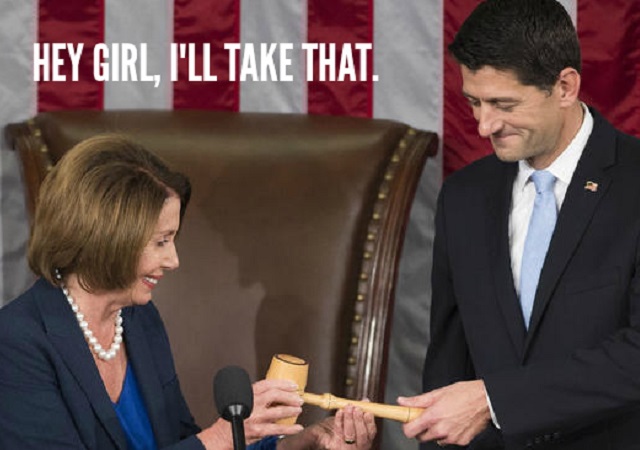 Congressman Paul Ryan (R-Wisconsin) was officially sworn in as Speaker of the House on Thursday, and the sign over the doorway to the Speaker’s Office wasn’t the only change. From a May 2012 post on Hey Girl, It’s Paul Ryan. Used with permission.

Emily Zanotti, who founded the site along with Lyndsey Fifield and Lindsey Dodge, told us that the idea came to them after a New York Times profile of the then-House Budget Committee Chairman “made him out to be super manly, so we took advantage of that.” Naturally, getting the VP nod in August 2012 boosted the site’s traffic and inspired a new flurry of posts, but after Obama was re-elected, the site went dormant.

It’s a different atmosphere for Ryan in 2015 than it was in 2012, however. Viewed as a hero by Republicans when he was picked as the vice presidential nominee, many of the same conservatives who gushingly praised him in 2012 attacked him as too moderate on issues like immigration when he became a serious candidate for Speaker.

These attacks are part of what sparked the site’s resurgence. “I think we have an opportunity to promote the work he’s doing and remind people what a conservative superhero he is,” said site founder Fifield. “We’ve been shocked and confused by the loud voices saying Speaker Ryan is some kind of secret liberal or establishment hack. It’s absolute nonsense.”

Legal Insurrection’s Amy Miller discussed this divide between the new Speaker and conservative activists in her coverage of Ryan’s swearing-in:

I think most commentators are right when they say that Ryan is the right man for the job, right now. I have no doubt, though, that Ryan’s first challenge will be to rebuild the trust that has been lost both between members of his caucus, and between the American people and the institution in which Washington continually begs us to place our faith.

That task, I fear, will be much more difficult than reconciling a budget.

Fifield had similar thoughts. “We [as Republicans] have such an incredible opportunity now to showcase to the American people that we are the party of youth and empowerment and ideas,” she said. “I hope we don’t squander it on infighting.”

According to Zanotti, Ryan has yet to publicly comment on Hey Girl, It’s Paul Ryan. That hasn’t dampened their enthusiasm, but she quipped that they would love to have his autograph.

So this is supposed to get single women to vote Republican?

Single women are notoriously stupid. Not that single men aren’t equally stupid – marriage is good for more than just children and finances, couples tend to make smarter decisions than they would individually – but single women are far more likely to carry their stupidity to the ballot box.

So, it’s not great, but since the main motivator for single female voters is government replacing their Daddies, we can’t really compete with that. But if shallow is all they buy, we have to stock some shallow, too. Like Trump, for example.

Let me get this right… all single people are stupid until they get married, is that your premise?

Watch this video of Paul Ryan side by side with Luis Gutierrez as they oitch for amnesty and then tell me what a great conservative Paul Ryan is.

Never mind that a great conservative is the last person a Mitt Romney would pick for the VP slot.

Plus, the great conservative Paul Ryan just voted for a budget bill that spends more money than the budget Harry Reid wanted. That’s a neat trick – a great conservative who can outspend Harry Reid, Nancy Pelosi, and the Democrat Party – all while giving Obama the ability to borrow as much money as he wants. Very Reaganesque. Very Buckleyan.

“Paul Ryan has the Speaker’s gavel, but does he still have conservatives’ hearts?”

??? He lost conservative hearts years ago.

Well, 236 of 247 Republicans voted for him, and he and Boehner didn’t vote. If Ryan isn’t conservative enough for you, maybe it’s time to start that new party you guys have been threatening for more than a generation.

Best of luck with it. Don’t forget to take the white supremacists with you. What they lack in brain power, they make up in enthusiasm, which is always important for new parties.

Seriously, what planet have you been living on. Do you really think you’re being well represented in DC?

Brit Hume would agree with Extragone.

Independents = 45% and rising
Republicans = 24% and plummeting

How’s that arrogance working out for you?

My apologies for the ‘arrogance’ comment. I’d meant to say blind arrogance.

Mad King Ryan got his coronation and his 2 year budget.

I wonder if someone can take Ryan and the others to court for corruption. Even just a bunch of frivolous actions to make them have to file a response, get dialog going and start some process where the end result is their removal.