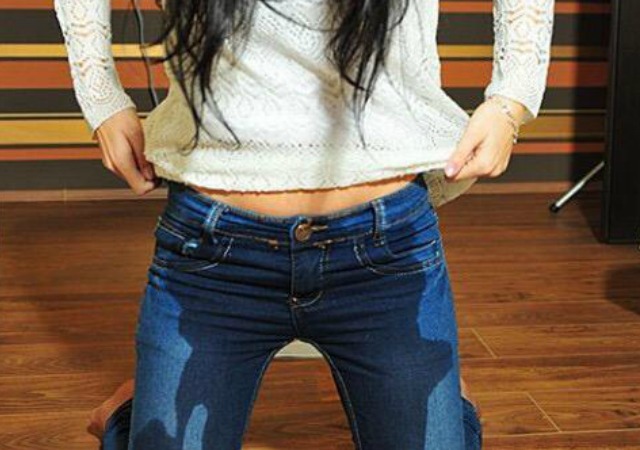 This is gross. And also sad. Progressivism continues its inevitable descent into complete parody.

According to Right Wing News, a few n’er do wellers on 4chan had a brilliant idea: see if they could convince people to, “publicly piss/sh*t their pants in the name of ‘Equality?'” 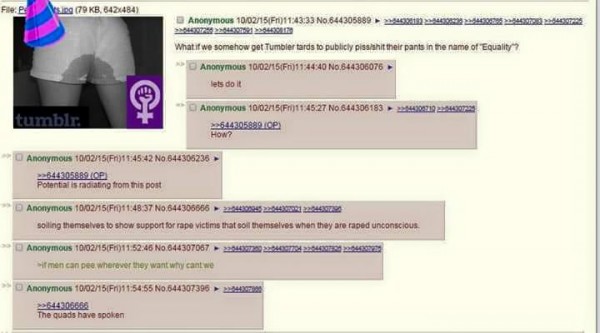 For these types of things to work, pranksters start a hashtag usually by attaching it to other well trafficked ones, then the intended marks take it from there.

There is a strange lack of connection of so many progressive manias to reality, that it’s hard to know what is real or not. Even for progressives.

There was a major trolling of leftist feminists and Gender Studies types on Twitter, with the hastage “#EndFathersDay.” It was started at 4Chan, but feminists ran with it apparently believing it to be true. Some of the tweets were hysterical — but impossible to tell if part of the group trolling or the leftist feminists who thought it was real.

Ask the Internet for idiocy and idiocy ye shall receive. These tweets being an indicator, 4chan’s trolling managed to rope in a few takers.

Having to wash a pair of jeans is nothing compared to rape. #pissforequality
I made the effort. You should too. pic.twitter.com/UEsQSjwv8E

Here is my contribution for the #PissForEquality stand up for equality! #feminism pic.twitter.com/h5hcyZ8a72

sooooo heres my support for #pissforequality please join this cause it means a lot to me and others who've suffered pic.twitter.com/ZCmjRtAo7N

Naturally, Billy Madison was the first thing I thought of, because obvs.

Is there any creature on the face of the earth more stupid than the average feminist?

I suppose all of the below-average feminists.

I’ve yet to meet or read one that measures up to “average.”

And we thought the Search for Sasquatch was difficult!

Any obastard voter, especially those old enough to know better.

This may be Hillary supporters reactions to news Biden Warren are running!

This is a phenomenon known as Poe’s Law.

TLDR – Poe’s Law states that without explicitly stating it as such, parody is indistinguishable from actual extremists.

Not so much Poe’s Law as actual trolling. /pol/ loves to jerk Feminists and SJWs around.

Well, Cyrus the Virus DID once refer to Poe as a very useful mammal.

I hope these people keep their genes out of the gene pool.

Oh my!
I hope these people keep their genes out of the gene pool.
—
Well, since they hate men, that shouldn’t be a problem.

Are you kidding? They’re the ones peeing in the gene pool.

The internet affords stupid people a digital town square in which they may gather to grow their stupidity. Here we see the fertilizer part of the process.

I don’t disagree, but why give this insanity a broader audience? This is both gross and pathetic.

Media has been hiding the psychoses of feminists for half a century, which is why so many people today (falsely) assume it just means “equal pay for equal work” (which has been federal law already for nearly as long).

People need to see the ugly side of feminism, which is the mainstream among feminists, camouflaged by their leftist cohorts in media and culture.

Not just “equal pay for equal work” makes for equality. There needs to be an equality of expletives as well, and it’s time to stop denigrating the bull’s excrement by equating it with idiocies and let the cow have some time.

This post goes far to explain how that killer in Oregon could post threats in the hours before the attack, and not get reported. 4Chan is a very weird place.

4chan is just a message forum.

Seriously, is this your first time on the internet?

The INTERNET is a very weird place.

Some weird places are weirder than others.

This post goes far to explain how that killer in Oregon could post threats in the hours before the attack, and not get reported.

Except, he didn’t. That was someone else entirely.

The so called "Egg Man" or person who 4chan and other listed as the Oregon shooter is NOT him. He is alive and has communicated to NBC.— Tom Winter (@Tom_Winter) October 1, 2015

how do I monetize this?

They are bright enough to give me money for some contrived reason…..

Tell them that the idea came from a Republican and there needs to be a small donation to put and end to the mess.

Only one problem- they have no money to be scammed.

Don’t worry daddy is still paying for everything.

I wish they’d chosen “Suck d*ck for feminism” instead. That would’ve closed the loop.

Hey, can we keep it classy?

Yeah! What JoAnn said! Whaddya think this is, anyway? Althouse?

Brilliant! Urine is a natural sedative for sperm, and is an effective deterrent for unwanted or inconvenient sexual intrusions.

I wonder how many men have a urine orientation.

Where is Lena Dunham? This is something that she would go all out for.

Yuk. The fourth one looks like she had a bad case of diarrhea.

Liberal idea to prevent rape: piss in your pants to scare off the attacker

Logical idea to prevent rape: pull out a gun and make the attacker piss his pants

Time to trot out grandma’s adage about, “If everyone jumped off a cliff, would you follow?”

The overarching reveal here is that there is no limit to what a liberal will do if convinced the ends justify the means.

And if other liberals will do it too.

When you thin about it, it really gets scary!

If the Suffragettes knew that future women activists would be pissing themselves as a political statement, they would have never begun the Suffrage movement.

Except for the outright villains nobody would have embraced most of the social changes that have happened if you showed them to your average man or woman in 1900.

They would have become reactionaries. Only those who fundamentally wanted to break society, anarchists, socialists etc would still travel down this road.

Please, someone ask them to commit suicide for equality. That’ll put some bleach in the jean (gene) pool.