Student newspaper calls it an “Embarrassment to Cornell” 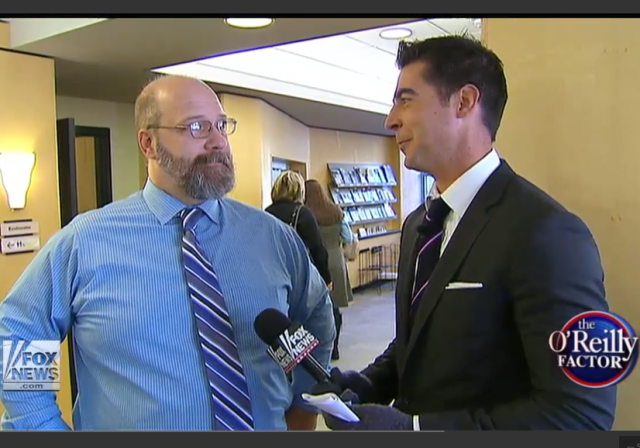 The highlight of the segment was that Cornell shut down Jesse Watters on air during student interviews.

Here is the segment.

I predicted that Cornell would experience the Streisand Effect, which is:

And sure enough, that is what is happening. The incident has been reported in dozens of major outlets, not just in the conservative blogosphere.

WaPo’s Erik Wemple, who unfortunately threw some cheap shots at Watters unrelated to the incident, did correctly diagnose the problem:

As he was interviewing students at Cornell University about the political tilt of campus professors, a media handler intervened, in full view of the camera. “Sorry for interrupting … my name’s Melissa. And once again, we’d just ask that you don’t interview students on campus.”

That was Melissa Osgood, Cornell’s deputy director of media relations. Like a good college administrator, Osgood had come out to advance a career — that of Watters, Fox News’s resident man-on-street interviewer.

Even the Cornell Daily Sun newspaper, which generated the original report on political donations, got into the act. Calling the incident an “Embarrassment to Cornell“. Unfortunately, like Wemple, the Daily Sun editors engaged in cheap name calling directed at Fox News, but their overall point was correct:

Cornell’s “Best Practices for Media” guide, which was sent to Fox News, as well as The Sun upon request, dictates that journalists “are not permitted to interview, photograph or shoot video of individual students on the Cornell campus, without obtaining permission from the student and the University.” In regards to Fox News, Joel Malina, vice president for University Relations, argued in a statement that administrators sought to “protect student privacy” in their decision to enforce the media policy. We fail to see how Fox News was violating the privacy of students on campus, as students could have declined to be interviewed….

There is no question that the Fox News segment clearly sought to embarrass Cornell through its cuts to cultural clips and witless questions. Yet the University’s response to the piece was far more embarrassing than reporter Jesse Watters’ shoddy journalism techniques. By disallowing reporters to ask students questions on campus, Cornell gave Watters the ammo he needed to ridicule the Hill in a greater capacity. Instead, Cornell should have embraced the autonomy of its students, allowing them to offer their consent in regards to media inquires, rather than acting as the gatekeeper to the Hill.

By far my favorite press coverage was that failed Democratic congressional candidate Martha Robertson, whose candidacy imploded under a factual assault from the Legal Insurrection, decided to blame Republicans for some reason:

Some, like Cornell alumna and local county legislator Martha Robertson, felt that the connection was clearly implied and also inaccurate.

“The idea that Cornell hires faculty based on political views is ridiculous,” she said.

“It’s an old Republican talking point that tries to make excuses for the fact that educated, well-informed people, who have devoted their lives to education, tend to support Democratic values. Frankly, this embarrasses the GOP and every so often they try to bring it up, I believe to intimidate universities into inserting political criteria where they do not belong.”

He shoots, he SCORES!

He was partially correct – that’s his share of it.

Martha Robertson – “It’s an old Republican talking point that tries to make excuses for the fact that educated, well-informed people, who have devoted their lives to education, tend to support Democratic values.”

For those who don’t speak progressive, here’s a translation:
“It’s an old Republican talking point that tries to make excuses for the fact that indoctrinated, brainwashed people, who have devoted their lives to the collective, tend to support Democratic values.”

Someday, somebody is going to write a doctoral thesis on Watters’ World, because it is a random walk through our society, asking questions that are part of the national conversation.

She so funny, that Martha Robertson lady.

bear steps out of den into bear trap!