Cornell Media Relations shows how NOT to do media relations 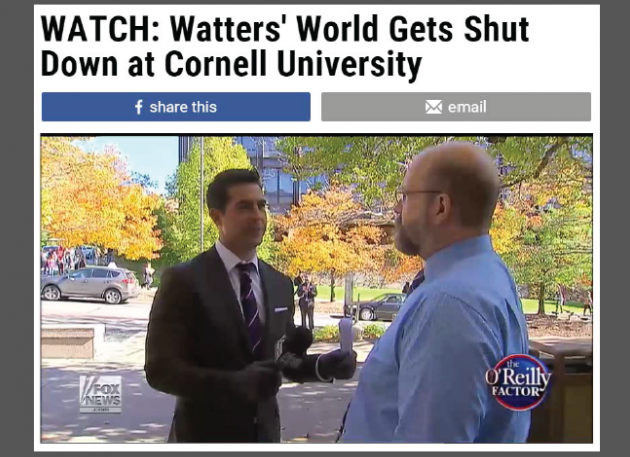 The Cornell Daily Sun student newspaper ran an excellent article showing that over 96% of Cornell faculty political donations went to Democrats. It was simple, ahem, math.

Yours truly was quoted extensively, as we reported with mathematical precision, 97% of faculty donations at Cornell Univ. to Democrats:

Prof. William Jacobson, law, one of the 15 Republican donors, said that he found the statistics “completely predictable.”

I had heard that Jesse Watters from The O’Reilly Factor was on campus, but for some reason he didn’t contact me. I need better PR people. In fact, I need any PR people.

And that’s exactly what he did at Cornell with students on campus. So far, so good.

And then Cornell Media Relations stepped in and shut him down. For no obvious reason. And thereby created THE STORY that Watters’ World was shut down.

What explains this overreaction?

I suspect it was the Project Veritas video in which a Cornell assistant dean of students appeared to indicate a willingness to have ISIS train on campus. (As I made clear in my post about it, I don’t think the assistant dean understood the questions.) That created a firestorm of controversy to which university communications was very sensitive.

But for Jesse Watters, these campus visits are out in the open and all in good fun. Cornell Media Relations should have left well enough alone. After all, it’s Watters, and everywhere is his world.

Had Cornell just left it alone, the story would have been no big deal.

You know, when I saw the statistic about 97% of the Professors supporting Leftist politicians, it didn’t really bother me… sometimes a certain demographic leans one way, other demographics lean another. That’s why surveys have cross-tabs. After all, Professor Jacobson HIMSELF works at Cornell. As a result, I really didn’t think there was anything wrong, or out of the ordinary at Cornell.

But if they’re chasing out the Press, and not explaining WHY… Perhaps there IS something very wrong with Cornell. I mean, their letter stating that they don’t discriminate in HIRING…

There’s not understanding the questions… and then there’s the inability to understand the questions. I don’t have a Doctorate, so silly me, I assumed that they hired competent, learned people to run a College. Live and learn.

Thanks for the education, Cornell! 😀

One Prof. Jacobson does not compensate for the left-wing professors. The evidence shows that left-wing professors do not hesitate to introduce ideology and political bias into the classroom. I would be surprised if the students had any inkling of the political leaning in classes with conservative professors. This is a problem for society as students graduate from the elite institutions and go on to media and policy jobs bringing their learned ideological blinders with catastrophic results. And when faced with bad ideas and bad policies, the graduates are unable to think their way towards more constructive concepts as they never had the experience of learning to listen to other viewpoints and practice in justifying their own.

Hey, at least they didn’t have him arrested for right wing terrorism.

What ever happened to the free speech movement of the sixties? Oh, I remember, they won! /sarc

Doncha know, free speech is just for the people that espouse left wing elitist drivel? How dare right wing wackos dare to even open their mouths. The left wing might be exposed to another way of thinking.

Wasn’t Cornell founded as a land grant institution, and isn’t their school of agriculture a state institution? I ask because I am wondering if Cornell’s government status forces Cornell to respect freedom for the press and if Cornell violated Watters’ constitutional rights.

I believe the vet school is state funded as well.

I believe the funding arrangement is something along these lines, New York State provides thirty per cent of the school’s funding, but demands eighty per cent of the students be in state students. Its a deal the Donald would love.
There are two episodes of Nat Geo Wild’s “Vet School’ that should be of interest to you. The instructor teaches the students how to scrub themselves down and remember the horse’s alimentary canal via dance routines.
Its hard to think a teaching technique like that would be de rigeur at Perdue, LSU, Virginia Tech, Oklahoma, Missouri or Ole Miss.

Oh yeah. I am sure the Obama DOJ will get right that.

I wonder if there’s any time in recorded history that Cornell has kicked a Collectivist media operation off campus…???

While many of us live in broad daylight, it appears that a majority of Cornell professors would rather hunker down in their dark caves with their doting initiates where both groups reamin afraid of the shadow they cast of themselves on the wall by the little light they do possess.

“remain” is the operative word.

Again we see the left wing opinion is the only truth and stands for the protection of the peoples right to know. They will shut up any who oppose their view and violate your protection provided by our first amendment rights. Isn’t it amazing how quickly they can move on information that threatens their power base but are woefully ignorant about anything their policies create as violations of a citizens liberties. The left point of view isn’t just a point of view but a way to control. People must understand that the way to control people has been honed to a fine practice for centuries and starts with the education and as early as possible. We see the assault continue with the implementation of the common core curriculum. Americans have had one of the best education systems in the world. The infection started over a half century ago and we saw the results with the demonstrations against the wars and the treatment of our heroes when they returned. America was distracted and didn’t see the subtle changes in our schools. The infection was so slow that we just assumed it from overcrowding and we trusted in our school boards to correct the problems. However instead of correction they continue the dumbing down and narrowing of the children’s point of view while restricting their ability to think creativity and for themselves. As we see any threat to their control however small will be dealt with swiftly. Just knowing about the efforts of the left is a long way from corrections needed. It has taken many years and many small steps to get where we are. The resistance will be great and well funded and like any disease will take time for recovery and like any disease will have its lingering effects on the body of this nation. Recovery like any disease will be long and if our attention wavers it will falter. The left has a favorite tactic of distraction while it uses the time to take another step to total control. Time to choose, do we continue to our Marxist state controlled by the self elected ruling class or will we take the harder task to free our nation once again so our children can live in freedom and up to their full potential.
Grampa

Watters ‘test drives’ student intellect by asking simple questions. If I were a liberal university I wouldn’t want the results aired either.

If Cornell wants to pretend they’re a private institution and restrict free speech on campus, then they can stop taking tens of $millions in government student loans every year.

And they should fire that thuggish media relations person. Another example of the bloated bureaucracy that’s driven up the cost of higher ed.

This is an excellent example of where academia is headed and the serious consequences of political uniformity. http://david-collier.com/?p=1308

At one of my Cornell reunions one of the events was a panel discussion of the Cornell building takeovers in 1969, which I knew something about because I was a student then.
http://guides.library.cornell.edu/wshtakeover

All of the panelists were “liberals”. The moderator was alumnus Donald Downs, who is more conservative, and who wrote the book, “Cornell ’69” documenting the events. But his role as moderator precluded his ability to comment.

As a result of the capitulation of the Cornell faculty to demands that there be no punishment for the participants in the takeovers, conservative faculty in the History and Government departments resigned in protest. They have never been replaced. My question to the panel was whether that might have had a negative effect on intellectual diversity at Cornell.

One of the “liberal” panelists grabbed his mic and said that of course Cornell has intellectual diversity – there are conservative faculty in the Engineering School.

At a later event one of my fellow alumni tapped me on the shoulder and said, “I’m a liberal, but I don’t think you got a good answer to your question.”

Cornell is no worse, and in some regards much better, than any other mainstream higher ed institution. I think the current higher education system is broken beyond repair. We need to move on to a different system.

Because in their hearts the liberal faculty agreeed with those violent Stalinists.

The sub-culture in our society that claims to value “academic freedom” is denying students the freedom to decide if they want to talk to a TV personality or not.

It’s even more egregious to think that the students effectively pay the salary of the administrators denying them their freedom. Even if 100% of the students don’t want to talk on camera, THEY should be the ones deciding if they want to talk or to walk.

think the video would have had a lot more impact w/o the cutaways.
imo (just a personal quirk) they really detracted from the issue of not being allowed to interview a person when that person GAVE permission to be interviewed.
cornell basically told its students you cannot talk to specific people and the criteria for that is set by ONE person.
very bad issue.
basically its communication slavery.
if I were a student there I would, no matter my political leanings, be very pissed that I was not allowed to speak to someone based on another persons feelings about the interviewer.

Cornell is a strange mixture of public and private, so the First Amendment may or may not apply on campus.

Watters’ conversations with students took place off-campus. Cornell has no control over what Watters does there.

I agree with dmacleo about the cutaways. They make it seem goofy. But then so do Watters’ knit gloves.

I missed the part about being off campus, and that is even more egregious IMO
this article concentrates on cornell stopping watters when, IMO, the bigger issue is cornell is telling students (even off campus as I just found out) who they are allowed to communicate with and this policy is controlled by a single person.

To be fair, it is possible that Watters initially tried to interview on-campus, was told he could not do that, and then proceeded to interview off-campus and was not prevented from doing that. Watters didn’t do a very good job of explaining the details.