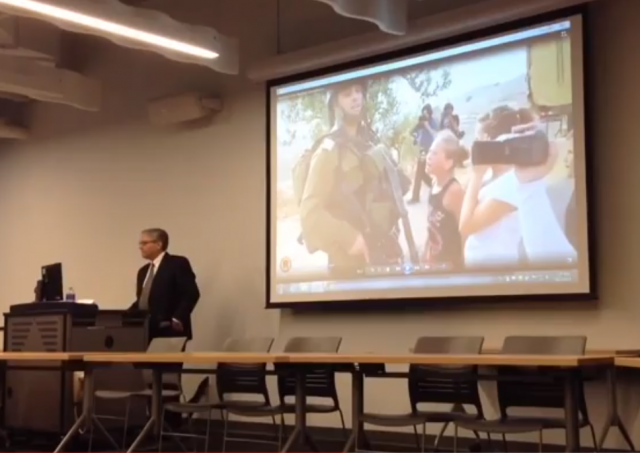 A storm of controversy erupted when the Ithaca, NY, chapter of Jewish Voice for Peace brought Palestinian activist Bassem Tamimi to a third grade class.

Tamimi is best known for the viral videos and photos he creates by sending children, including his own, to confront Israeli soldiers. Tamimi, who argues that it is the “duty” of children to engage in acts of resistance, was on a now-concluded U.S. national tour co-sponsored by JVP and the Chicago branch of Amnesty International. 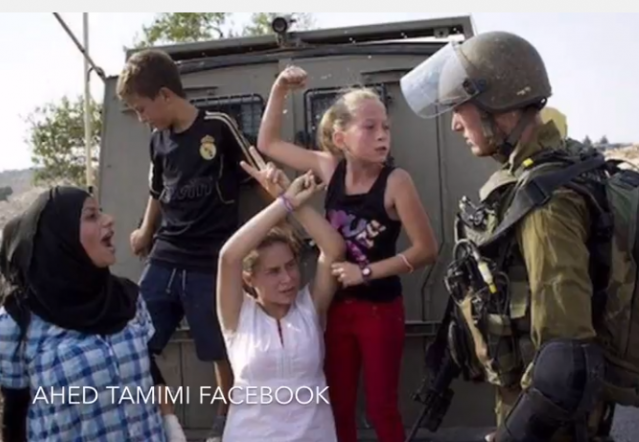 The Superintendent of the Ithaca school district, after an investigation, denounced the visit,finding that Tamimi was not invited by the school and the event was “not developmentally appropriate for third graders, nor aligned with the New York State standards. The statements were politically skewed, inflammatory, and not endorsed by the Ithaca City School District.”

Tamimi concluded the event by calling for the third graders to become “freedom fighters” for Palestine.

Since Legal Insurrection first broke the story on September 20, the story have reverberated in the Ithaca community, with letters to the editor of multiple local newspapers denouncing or supporting the event.

In a wonderful article in The Tatler, the Ithaca High School student newspaper, student journalists explored the story, Community Erupts against Pro-Palestinian Guest Speakers at BJM:

This incident was first addressed by Superintendent Luvelle Brown at a BoE meeting on September 22 as “something that I’m not happy about, nor should anyone be happy about,” as the guests were “very controversial figures invited unbeknownst to the principal.”

Brown’s comment was made in response to outcry from many parents and Ithacans over the guests’ controversial stances. …

While al-Tamimi claims he supports nonviolent, passive resistance, he has been arrested by Israeli authorities over a dozen times, including in 2012 when he solicited protesters to throw stones.

More controversially, however, footages of these confrontations have raised debates worldwide on social media, where supporters of both sides have interpreted them in different ways. Images and videos of these incidents, usually involving youths harassing Israeli soldiers, were recorded by Palestinian and Israeli activists and reporters from multiple angles.

I was particularly pleased (and somewhat surprised) that the student journalists had read my posts at Legal Insurrection, since I had no contact with them:

A law professor at Cornell, William A. Jacobson, wrote in his website Legal Insurrection, “Tamimi’s children and other children from the village of Nabi Saleh are encouraged to confront Israeli soldiers in the hope of provoking a reaction.” He added, “This all is a very dangerous exploitation that puts the children at risk. Yet Tamimi glorifies and encourages the use of children for such purposes.” Jacobson also filed a letter to the district demanding answers to questions to the district’s policies on Israel and Palestine and aspects of political discourse in ICSD.

Not to be outdone by high school journalists, the Ithaca College student weekly magazine, Ithaca Week, also did a write up and video about the controversy:

William Jacobson, a clinical professor and director of the Securities Law Clinic at Cornell University, came to Ithaca College Oct. 7 to discuss a recent issue at one of the local elementary schools.

Jacobson said he did not believe this was an appropriate conversation for third graders. However, he said if people wanted to try to educate children about the conflict, instead of making it political, both sides should have been represented.

I don’t think this story is going away anytime soon, particularly after Tamimi spread the false claim that Israelis arrest Palestinian children for the purpose of harvesting their organs.

If not the principal or superintendent, have they discovered who did set this up, who invited this guy in?

Meant to add, I know the JVP sponsored it, but they had to have someone at the school approve it, if only a single teacher – who needs to be fired.

They never said it wasn’t the principal.

Go read the full text of the letter sent by the Superintendent and listen to how they are trying to walk back what was VERY CLEARLY a sanctioned and requested talk.

‘we have learned that the speakers went beyond the original intent of the talk.’ (CLEARLY SHOWS that this was a planned and requested event from SOMEBODY in authority).

‘not endorsed by the Ithaca City School District.'(SCHOOL DISTRICT. Again, very clearly somebody in authority at the school asked them to speak).

Then look at their ‘intended actions’ – to review policies and procedures for guest speakers, and to review how they teach ‘human rights’.

ABSOLUTELY NO MENTION of anybody facing any consequences or disciplinary action.

I 100% guarantee you it was the principal and now he’s being covered by his fellow liberal pukes who are only mad at the fact that he got caught.

I am so glad you got onto them about this, Professor, and are not letting go.