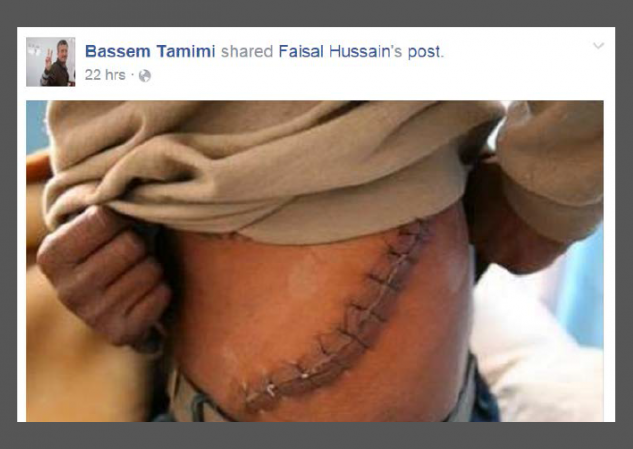 Incitement on social media is fueling the current epidemic of knifings, firebombings and stonings against Israeli Jews.

That incitement comes from the highest levels of the Palestinian Authority and Hamas, as well as people on social media.

The incitement involves not only fabricated claims of Israeli intentions as to the Temple Mount and al-Aqsa Mosque, but also false claims which portray Palestinian attackers as random innocent victims of Israeli aggression.

The cumulative effect is to so inflame young Palestinians, including children, that they attack Jews for being Jews.

Now a famous Palestinian activist has joined in.

Bassem Tamimi is the internationally-famous Palestinian activist from the West Bank village of Nabi Saleh who is best known for the viral videos and photos he creates by sending children, including his own, to confront Israeli soldiers.

Tamimi, who argues that it is the “duty” of children to engage in acts of resistance, is on a U.S. national tour co-sponsored by Jewish Voice for Peace, which is at the forefront of the Boycott, Divestment and Sanctions movement.

Tamimi is nearing the end of a 25 city U.S. Speaking Tour co-sponsored by JVP.

During the tour, Tamimi also was a speaker at the annual meeting in late September of the U.S. Campaign to End the Occupation:

A storm of controversy erupted during Tamimi’s tour when the Ithaca, NY, chapter of JVP brought Tamimi to a third grade class.  Tamimi concluded the event by calling for the third graders to become “freedom fighters” for Palestine.

The Superintendent of the Ithaca school district, after an investigation, denounced the visit, finding that Tamimi was not invited by the school and the event was “not developmentally appropriate for third graders, nor aligned with the New York State standards. The statements were politically skewed, inflammatory, and not endorsed by the Ithaca City School District.”

It always has been highly questionable that Tamimi was the non-violent peace activist he presents himself to be. The Tamimi clan continues to be involved in inciting violence via social media.

But this Facebook entry by Tamimi, in which he spreads the claim that Israel arrests Palestinian children in order to harvest their organs, takes the incitement to a new level: 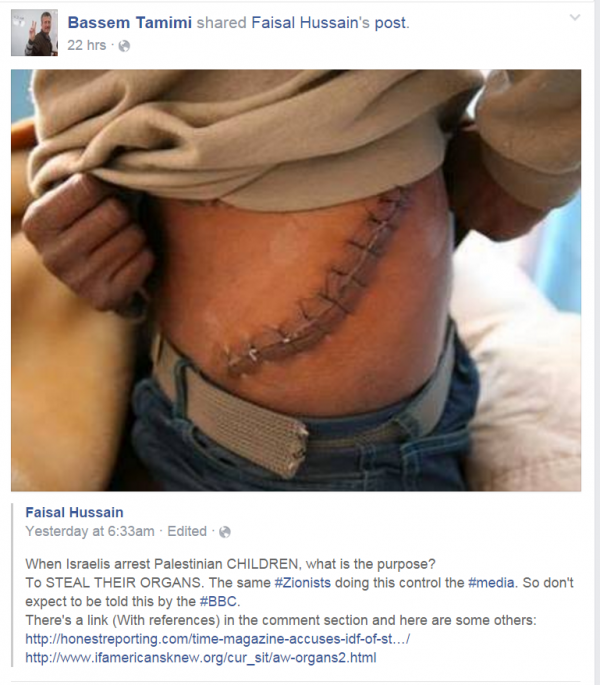 While I can’t verify the origin of the photo Tamimi shared, it appears to be a stock photo used in many articles for many countries. It was used, for example, in a 2012 International Business Times article, which doesn’t mention Israel, about illegal international trade in kidneys.

It was that theory, among others, that made Weir so toxic that JVP and the U.S. Campaign to End the Occupation severed ties with Weir.  (The other link to Honest Reporting actually contradicts the theory, as it reports on the retraction by Time Magazine of such allegations.)

There is no indication in Tamimi’s sharing of the post that Tamimi disagreed.

This claim appears to be part of the ongoing incitement of violence as part of the current surge in stabbings and other attacks against Israelis. The original Facebook post Tamimi shared, by someone using the name Faisal Hussain, has been shared over 1200 times as of this writing.

As with many blood libels, the start of this claim is based on a twisting of history.

There was an issue of the Israeli Ministry of Health performing organ donation on deceased people whose families had consented to autopsies, but not specifically organ donation. But that practice ended in the 1990’s and was not specific to Palestinians, it included Israeli civilians and soldiers. Now, specific organ donation approval is needed.  Additionally, there have been individual, Israelis involved in the illegal international organ trade, as there are from other countries. Israel has prosecuted people involved in this trade.

The false organ harvesting libel is made against Israel elsewhere as well, in what the Anti-Defamation League calls The Big Lie Of Israeli ‘Organ Harvesting’.

That is pure incitement to violence, much like Mahmoud Abbas’ false claim on national television last night that Israel executed a 13 year old who stabbed an Israeli child. 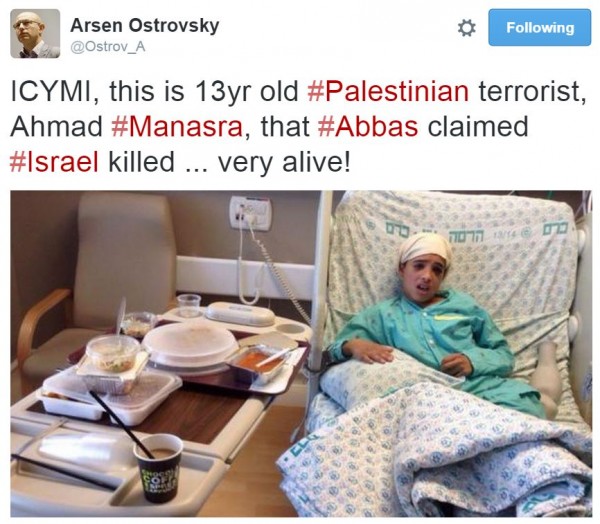 Will Jewish Voice for Peace and the U.S. Campaign to end the Occpation stand by Tamimi as he spreads the type of blood libels that caused them to distance themselves from Alison Weir?

Actually, what’s truly shocking is the man’s claim that this won’t be shown by the BBC because the zionists control the media.

As in, the BBC isn’t leftist or pro-Palestinian enough for them?

There’s a Twilight Zone episode waiting to be written where this puke awakens with a kippah and a prayer shawl Crazy-glued to him. If he gets out of his own kitchen, the remaining sequences should cover him trying to get out of his own village alive.

Now THERE’S an idea. I was wondering if there was some imaginative way to off this guy, and that’s as good as it gets – done in by his own. As ye sow, so shall ye reap.

They might as well revive the passover matzoh blood libel.

This has been going on for some time, not just involvinmg Israel. The story has been circulated in Mexico. (as a false explanation as to why drug gangs killed people)

It is NEVER TRUE because it is not medically sound to kill people and THEN harvest organs, but somebody is interested in spreading the idea that this kind of a crime is possible.

Furthermore the economics of it don’t make sense. Organized crime syndicates profit from a wide range of illicit activity, including drug trafficking, extortion, and prostitution, but selling stolen organs is a whole different matter.

Drugs (which can be mass-produced, are easily smuggled, and can be sold anywhere) are a far more profitable commodity to obtain, distribute, and sell than human organs which must be harvested to order (the organ donor and recipient need to be compatible); are perishable (they must be transplanted within about 24 hours); and so on.

Not only that, but kidnappers, surgeons, anesthesiologists, and nurses would have to be paid off, further reducing any profit from organ theft sales.

What can be done is to take out a kidney from a living person and even that is never quite done by force.

When China harvested organs, it was with executed prisoners, and with an extraction team right there on the scene.

No point in discussing logistics and the feasibility of the thing. It’s more important to assert that Muslims are liars who will say and do anything to advance their cause. This lie is but one example amongst many.

There was an issue of the Israeli Ministry of Health performing organ donation on deceased people whose families had consented to autopsies, but not specifically organ donation.

I don’t recall such a thing, but you may be right. But I definitely recall a major scandal over the medical examiner, a Dr Hiss, performing autopsies, not only without the family’s permission but over their explicit objection. He was also caught keeping samples of people in jars for years instead of returning them for burial. To the best of my knowledge he was doing this for decades, never faced justice for it, and retired with full dignity and pension.

Re attempt to claim that Israel had “executed” the 13-year-old terrorist Ahmed Manasra, his family tried to use Israel’s version of HIPAA to prevent the press filming him alive and well in hospital. Thankfully some sanity prevailed and the Israeli legal establishment didn’t support that attempt. The health minister allowed the filming, and his “legal adviser” didn’t overrule him.

I just found out that he wasn’t shot at all, he was bumped by a car while attempting to escape; his 15 year old cousin charged police with a knife and was shot and killed, reinforcing the fact Israeli police learn to shoot straight. (It’s sad but their per capita chances of having to use their guns is a lot higher.)

I’m not sure what happened here. Fog of war? Just blatant exploitation, to use the 13 year old not the 15 year old? It’s academic now.

What the hell – they’re going to get blamed for it no matter what, so harvest the damn organs and sell them on ebay and use the money for something fun.

Better yet, get into business with Planned Parenthood and have a ready distributor in the U.S.

In the interest of an informed public, there’s a lot of pertinent info here about the Ahmed Manasra incident, including the context of why his case was adopted by Palestinians. (They had video of Jews cursing him and hoping for him to die while he laid in a pool of blood, so it was the perfect opportunity. Hard for me to blame the Israelis for that reaction given what he and his cousin tried to pull.)

The crystal clear footage showing knives in hand is relevant too. It was, after all, in broad daylight.

That is either a mediocre makeup job or real lousy stitching done by a drunken doctor.