Tamimi is best known for using children, including his own, to confront Israeli soldiers to create viral video and photo opportunities. He also is an advocate of children taking part in resistance activities, including stone throwing. To pro-Palestinian activists, however, he is a symbol of Israeli repression.

The third-grade presentation was skewed and biased against Israel, according to a statement issued by the Ithaca City School District Superintendent, after an investigation. Among other things, after seeing videos and hearings stories of how Palestinian children suffer at the hands of Israelis, the third graders were urged to become “freedom fighters for Palestine.”

Nonetheless, Jewish Voice for Peace defends the event, and has launched a campaign claiming that Palestinian voices have been stifled and suppressed in Ithaca and elsewhere in upstate NY. It was the leader of the local chapter of JVP and the coordinator of Tamimi’s national speaking tour, Ariel Gold, who appears to have arranged the third grade event.

Alex Dunbar of the Syracuse NBC affiliate, reports (the video is cut off at the end):

Human rights is a standard topic in 3rd grade social studies but parents and the Ithaca School Superintendent were surprised to hear that Palestinian activist Bassem Tamini was a speaker in an Ithaca elementary school classroom on September 18th. The superintendent says Tamimi played a video for Beverly J. Martin 3rd graders that referenced Israelis killing Palestinians and said the 8 and 9 year-olds could help by becoming freedom fighters for Palestine. In an interview Tuesday over Facetime, Tamimi stood by his presentation.

“This is what I teach my son and my daughter and my children the same age. If I accept it for my children, I think it will be acceptable for anyone in the world.”…

In a statement, the superintendent called the presentation inappropriate for 3rd graders and politically skewed. In an interview, Gold described the presentation as advocating for peace. She was reminded that Tamimi acknowledged asking the children to be freedom fighters for Palestine.

The Ithaca School Superintendent said administration was unaware Tamimi would be speaking to students. The district said it is reviewing its policies on guest speakers and visitors to buildings as a result of the presentation. When asked about that statement and an investigation into the circumstances of the presentation Gold said “What I want to say is this type of bullying and intimidation – which is really what has occurred here is bullying and intimidation – to attempting to silence Palestinian voices.”

In the full Tamimi interview Dunbar posted at the CNY Central Facebook page, however, Tamimi makes clear that when students were urged to become freedom fighters for Palestine, he was hoping they would become activists for the Palestinian cause (if video doesn’t load, go to Facebook link above):

When a guest speaker comes to an elementary school, it’s usually to share stories about what they do for work. But this was not the case in Ithaca where a Palestinian activist was allowed to give a presentation to 3rd graders and it’s raising big questions. TONIGHT — Hear why the activist believes the topic was appropriate for children.

Posted by CNYcentral.com on Tuesday, October 6, 2015

In a more complete interview with Gold posted on CNY Central’s Facebook page, Dunbar pressed her on the justification for the appearance, and despite Tamimi’s statement as to the purpose, she insisted it was all about promoting love and peace (if video doesn’t load, go to Facebook link above) :

When a guest speaker comes to an elementary school, it’s usually to share stories about what they do for work. But this was not the case in Ithaca where a Palestinian activist was allowed to give a presentation to 3rd graders and it’s raising big questions. TONIGHT hear from a mother of one of the students —

Posted by CNYcentral.com on Tuesday, October 6, 2015

Trying to turn students into Palestinian activists is the entire purpose of Tamimi’s national tour, as he indicated in an interview with Times of Israel in which he justified his advocacy of using young children to create viral video and photo events:

“When we are able to get a video like this, we can use it to great effect,” he said. “When enough people here see these videos and hear our stories, it can start a kind of intifada [popular Palestinian uprising] against Israel in the United States.” …

Perhaps most pronounced among the criticisms directed his way is that of child exploitation, in that he urges children to throw rocks at soldiers in order to provoke confrontations captured on video and later disseminated. This is a charge he does not deny.

“Our cameras are our weapon,” he said. “And when we force IDF soldiers to confront our children, our cameras are a way for us to fight Israel and the occupation.” …

“Six years ago, we developed a model of protest,” he added. “We have a weekly demonstration where we clash with the army … and we film it to show the world the realities of how we live.”

Amid the current escalation of Israeli-Palestinian conflict, stone throwing has become a more prominent issue within Israeli politics after the murder of 64-year-old Alexander Levlovich, who was killed when his car was pelted with rocks while he was driving home from a Rosh Hashanah dinner in East Jerusalem. In one of several other recent incidents, an Israeli family suffered minor wounds after it was targeted during a ride home to Tekoa following a Sukkot meal in Efrat….

When asked if stone throwing is “nonviolent,” Tamini said: “In the context of our resistance, no it is not violent … Can stone throwing technically be violent? Yes. But for our protests at Nabi Saleh, they are our voices, our expressions of resistance against an enemy.”

Gold also made clear her view of Israel:

“I believe a Jewish state is racist,” she told The Times of Israel. “Any country that favors one group of people over another is racist. We need people like Tamimi who can demonstrate that reality.”

When this reporter asked if she was also advocating boycott or dissolving any other nation-states or countries involved in conflict, she said she was not. 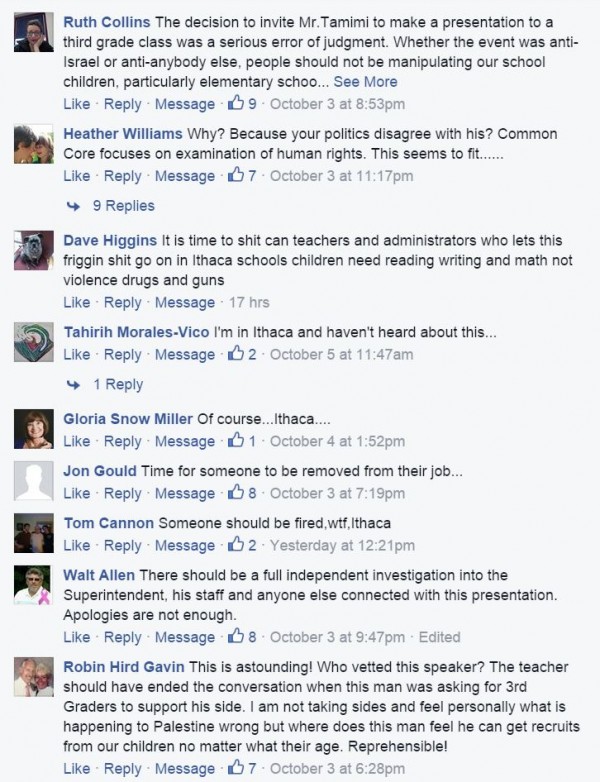 The comments at CNY Central’s Facebook page, where the two videos have been viewed a combined 15,000 times, is just as vigorous: 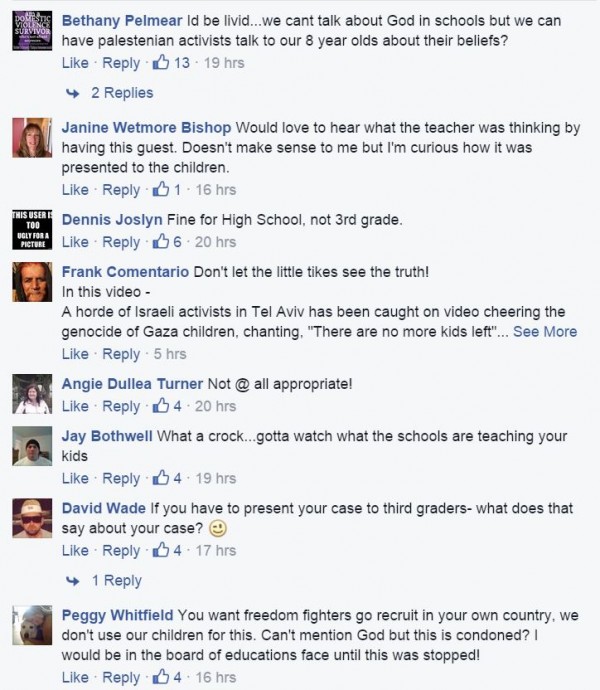 There is little doubt what this event was about. It was turning young children against Israel and for Palestinians.

Whether that was appropriate in a third grade class is something the Ithaca School district is going to have to address beyond issuing a statement.

Palestinian lies have no place in our schools. What’s next? Seminars in rock throwing so they can be just like those poor, misunderstood palestinian children?

This should be condemned, but not for “taking sides”. On the contrary, as the fellow says, “human rights is a standard topic in 3rd grade social studies”, and I think it would be 100% appropriate for a 3rd-grade class to hear from a resident of Judea on what it’s like to have rocks thrown at you whenever you venture out on the roads, needing bullet-proof glass on your car, knowing that all your Arab neighbors want you dead, and your own government wants to force you out of your home because it doesn’t want to defend you. 3rd-graders are not too young to learn about human rights, but they are too young to see through lies, and therefore must be presented only with the truth.

3rd-graders are not too young to learn about human rights, but they are too young to see through lies, and therefore must be presented only with the truth.

Actually, I think it is a bit young. If they are “too young to see thru lies”, then they are too young to know if they are being presented with “the truth”, or not. And this incident the Professor is reporting on should be a prime example of why you shouldn’t trust liberal schools to present only “the truth” to third graders.

Teach them to read & write & do arithmetic in third grade; then expose them to the vagaries of the adult world when they are old enough to know (or at least suspect) when someone is lying to them.

The reason they start indoctrinating young is “if the teacher believes it, and they send me here to learn, then I should learn this as true”

Hate for Jews is religious teaching, of elementary and core Islam. This could be a proverbial teaching moment. It is this feature of Islam (among many others) that makes Islam evil, more evil even than the Nazis who derived inspiration to kill Jews from their Muslim allies. Don’t be a Nazis.

“Freedom Fighters with love” cheered the terrorist who butchered a baby in it’s crib with a knife.

The Itamar attack,[2] also called the Itamar massacre,[3] was an attack on a Jewish family in the Israeli settlement of Itamar in the West Bank that took place on 11 March 2011, in which five members of the same family were murdered in their beds. The victims were the father Ehud (Udi) Fogel, the mother Ruth Fogel, and three of their six children—Yoav, 11, Elad, 4, and Hadas, the youngest, a three-month-old infant. The infant was decapitated.[4] The settlement of Itamar had been the target of several murderous attacks before these killings.[5]

“I believe a Jewish state is racist,” she told The Times of Israel. “Any country that favors one group of people over another is racist…”

That applies to every Islamic country in the world, and especially in the Middle East.

1.) “When asked if stone throwing is “nonviolent,” Tamini said: “In the context of our resistance, no it is not violent … Can stone throwing technically be violent? Yes. But for our protests at Nabi Saleh, they are our voices, our expressions of resistance against an enemy.””

Is there some writing or action of Dr. MLK’s that we don’t know about, one that advocates throwing “technically…violent” stones “against an enemy? I don’ttttttttttttttt….think so.

These are deceitful evil people who pervert the young into tools for terrorists. They should be incarcerated for terrorist activities.

“Each act of terrorism is a “performance” devised to have an impact on many large audiences. Terrorists also attack national symbols, to show power and to attempt to shake the foundation of the country or society they are opposed to. This may negatively affect a government, while increasing the prestige of the given terrorist group and/or ideology behind a terrorist act.”

Arab nations vs. Israel. And the bully is?

Only a liberal mind indoctrinated by Democratic Party and CAIR will have the latter as the answer.