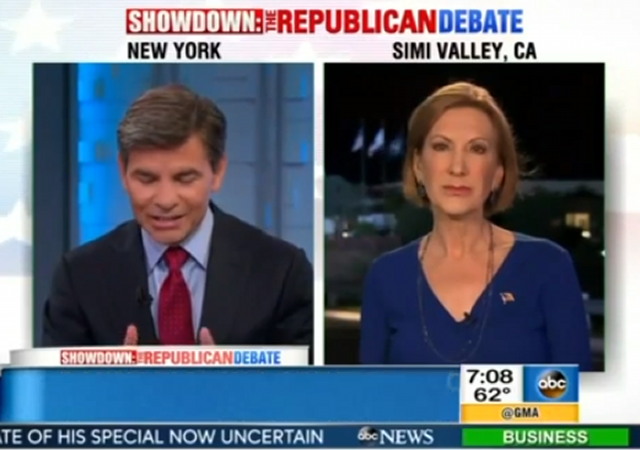 Fresh off her excellent debate appearance Wednesday night, Carly Fiorina made an appearance on Good Morning America with George Stephanopoulos who tried to back her into a corner over comments she made about the horrific Planned Parenthood videos.

Just as he did last spring with Clinton Cash author Peter Schweizer, Stephanopoulos came off looking like a hack.

Scott Whitlock of NewsBusters has the story:

Former Democratic activist turned journalist George Stephanopoulos on Thursday went after Carly Fiorina for attacking Planned Parenthood during Wednesday’s presidential debate. The Good Morning America co-host grilled, “Another powerful moment last night was when you talked about those Planned Parenthood tapes. But analysts who’ve watched all 12-plus hours say the scene you’ve described, that harrowing scene you described, actually isn’t in those tapes.”

He wondered, “did you misspeak?” Fiorina shot back at the man who secretly donated $75,000 to the Clintons: “I don’t know whether you’ve watched the tapes, George….Certainly none of the Democrats who are still defending Planned Parenthood have watched those tapes.”

The left is in complete denial about the Planned Parenthood videos. When they’re not claiming that the tapes are heavily edited, they just deny that they even exist.

Mollie Hemingway writes at The Federalist:

There have been 10 videos exposing Planned Parenthood since July. The media have struggled to cover most of the them, even though they are full of scandalous information about human organ harvesting. In addition to the 10 videos, lengthier footage of the hours-long meetings from which they were gleaned is also available. Everyone who cares about humanity should watch these videos, which are available here.

As for Fiorina’s quote, she is likely referring to the entirety of the 10 videos, including the seventh video released by the Center for Medical Progress. Watch the full video for yourself. It does, in fact, show a fully formed fetus, heart beating and legs kicking. And it shows this while Holly O’Donnell, a former organ harvester who worked for StemExpress at a Planned Parenthood affiliate, graphically discuss the harvesting of a brain from a baby whose heart was beating.

Better response: “I have looked at the videos. Apparently you have not. Have *you* misspoken, George?”

George will rely on any source that fits the narrative.

As that guy on the radio calls it: “the daily soap opera”.

It took the NYTimes 16 days to clarify that both the unedited videos were released at the same time as the edited videos.

I went to the dictionary to look up the definition of hack and George Stephanopoulos’ picture was there!

It wasn’t hard to do. Carly outVox-ed Stephanopoulos.

If we learned nothing else from Breitbart, it’s that the main thing is the narrative, not the facts. George demonstrates that fairly well.

It should be easy enough for somebody to put up a short snipped of the videos that shows the portion Carly is referring to. Has anybody seen such a video/link?

Could that be because no one knows what a “short snipped of the videos” is?

Or, were you trying to say “snippet”? Which would be seen as “heavily edited” by George and his friends.

Josef Mengele would be so proud of those organ harvesters. Personally I cannot come up with a punishment harsh enough.

A Fox News host (I don’t remember which, but I think it may have been Kelly) also claimed that Fiorina was wrong about the video showing a baby on the table. On FNC it was said that that image was only described.

Reminds me of Candy Crowly, but at least Jake Tapper didn’t try to falsely correct her mid-debate.

I think Megyn’s guest was saying the video was from some other organization and was placed in the video with the voice of the PP person talking about how they go about harvesting a brain (just writing that makes me shiver). The guest was claiming the video was implying the person speaking was there while the procedure was going on when she wasn’t.

To me, doesn’t matter if the video is from another organization – the procedure is the same and it’s horrific to contemplate.

You know, there’s a simple explanation for that…

Paul, all of the videos are on the Center for Medical Progress website. Linked clear as day.

My point is that she (or somebody) should just say watch this video at this link xyz minute mark 1:23 to minute mark 4:56.

Really? A link to “short snippets”?

The question is, who’s full of crap here, George or Carly? Is the cited atrocity in the video, or not? Interview zingers don’t answer such questions well.

As for Fiorina’s quote, she is likely referring to the entirety of the 10 videos, including the seventh video released by the Center for Medical Progress. Watch the full video for yourself. It does, in fact, show a fully formed fetus, heart beating and legs kicking. And it shows this while Holly O’Donnell, a former organ harvester who worked for StemExpress at a Planned Parenthood affiliate, graphically discuss the harvesting of a brain from a baby whose heart was beating.
—Molly Hemingway (a very reliable person)

Maybe you can refute that FACTUALLY, tom. If you’re going to question Fiorina and many others, you sort of have an obligation to know WTF you’re talking about.

Yeah, that’s it, thank you although watching that made me want to puke and cry at the same time.

Vox and Stephanoplophogous and the others are flat out liars .

God help this country for what it is doing.

Fiorina was fired from HP 10 years ago. Her track record at HP and Lucent was so bad that no other company has tried to hire her. There is a current of anger and mean spiritedness that seeps out from time to time in the debate. She critized Cruz and conservatives for trying to defund Obamacare. She is big promoter of H1B visas and open immigration. When she headed Lucent share price went from 87 dollars to nothing and then company folded. She said in 2008 that if she hadn’t agreed to support McCain she would have been for Hillary. She is currently trying to pretend to be conservative but she isn’t. She is not an honest person.

“No other company has tried to hire her”

“After resigning from HP, Fiorina served in the board of Revolution Health Group and computer security company Cybertrust in 2005. In 2006, she became a member of the board of directors for chip maker Taiwan Semiconductor Manufacturing Company (TSMC),but resigned from that board on November 30, 2009.”

“In April 2012, Fiorina became chair of Good360, a 501(c)(3) nonpartisan nonprofit organization in Alexandria, Virginia, which helps companies donate excess merchandise to charities.Good360 has been consistently ranked by Forbes Magazine as one of the top 10 most efficient charities,and ranked as the 33rd largest charity in the United States.”

“Fiorina served as Fund Chair of One Woman Initiative (OWI), a partnership between the private sector and government agencies including the United States Agency for International Development (USAID) and the United States Department of State (DoS).”

I understand if you don’t like Carly’s positions that’s fine, at least be diligent about what you post.

Wow, those parallels to T-rump are really thought-provoking, huh?

Either you or Fiorina isn’t an honest person.

I just watched the video. Carly is honest, you are not.

Like lots of people have pointed out, if you start around the 5:50 mark in about ten seconds you’ll see a live, fully forme INFANT lying in a cold metal tray. I guess you can call what she’s (it could be a boy but the infant is so tiny I’m not sure, and it is hard to watch) doing with her left leg “kicking.” But it’s a feeble kick. She’s definitely moving it, but she’s weak and dying.

Where did you copy that from? I swear, I just read those exact words yesterday.

Read it and weep.
http://www.nytimes.com/politics/first-draft/2015/08/27/former-hewlett-packard-board-member-praises-carly-fiorinas-business-leadership/

The media should probably broadcast the full footage of PP videos on all of their channels just to prove that Carly Fiorina wrong.— Dana Loesch (@DLoesch) September 17, 2015

Ignoring the horror of these abortions, why don’t people ask these PP defenders about the felonies they commit? That would remove their use of abortion rights as a defense of PP.

True believers in the secular sacrament of abortion don’t seem to care that Mengele would undoubtedly be proud of its chief celebrant, Planned Parenthood.