“There’s a familiar refrain…and it should worry every American voter.” 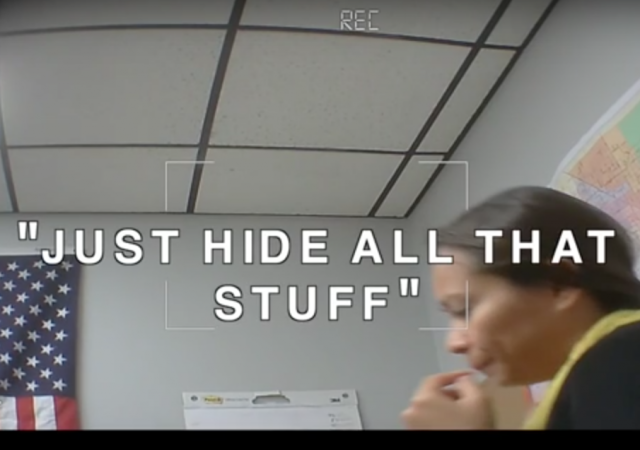 It’s better to beg for forgiveness than ask for permission.

That’s the attitude of Hillary Clinton’s presidential campaign—and they’re not just talking about using their considerable muscle to gain an advantage. They’re talking about violating the law.

A new video from James O’Keefe’s Project Veritas purports to show Clinton campaign staffers in Las Vegas openly bragging about the ways that they have skirted Nevada election laws while registering voters.

From the Daily Caller:

In another scene, Harrison Lee, a fellow with Hillary for Nevada, told how he was reprimanded for openly endorsing Clinton outside of a Las Vegas library.

“Yesterday, we got kicked out from — we were told we can’t push [Hillary Rodham Clinton] anymore in front of the library,” Lee said.

Asked why, he explained: “Because they’re afraid of, like, you know, the voter registration being no longer a neutral thing.”

Lee also said that the campaign workers had “been able to get away with asking the Hillary question after voter registration for a long time” at government buildings, the Department of Motor Vehicles and the campus library.

In an exchange filmed at the Nevada field office, another campaign fellow, Henry Engelstein, told how he and Lee were confronted by a worker at the Las Vegas library who explained that they were violating the law.

“She came out with the Nevada statute books and opens it up and starts reading the statute about how you’re allowed to get voter reg,” Engelstein said.

In Nevada, O’Keefe asserts in his voiceover, it is a felony for employees of voter registration agencies, voter registrars, and other election officials to solicit votes for or against a candidate or issue. It’s pretty cut and dry—but that didn’t (and presumably hasn’t) stopped Clinton’s operatives from skirting the rules. At one point in the video, Las Vegas attorney and Clinton surrogate Christina Gupana is heard telling the staffers to “just hide all that stuff,” referring to pro-Clinton campaign signs and caucus cards.

Will any of these people go to jail over this? Probably not. The problem is their attitude toward the law—it’s eerily reflective of Hillary Clinton’s own state of mind toward investigations into her private e-mail server.

At the end of the video, O’Keefe says, “the videos are gonna keep coming until this campaign starts obeying the law.” We’ll keep you updated as these new videos are released*. You can read Legal Insurrection’s coverage of Project Veritas’ previous video stings against the Clinton campaign here and here.

*Let’s be honest—nobody expects a mea culpa from Hillary Clinton.

“Rules are for teh little people”.

Collectivists will do anything, break any law. Their delusions tell them they are combating evil.

What is that verse … take the log out of your own eye before you deal with the speck in another’s eye.

“What difference does it make?” Collectivists don’t get that their offense is far more evil than those they claim to be evil.

Of course, the sick news maybe now we could follow them into the bathroom now and pee on them claiming it is in our nature. Nature made us pee on them so they could rightly claim we piss them off. We have Kennedy’s logic from SCOTUS to back us up on this one!

It is beam and mote.
Specifically:
Or how wilt thou say to thy brother, Let me pull out the mote out of thine eye; and, behold, a beam is in thine own eye?

Thou hypocrite, first cast out the beam out of thine own eye; and then shalt thou see clearly to cast out the mote out of thy brother’s eye.

I’m sure the FEC will jump right on this…/sarc

Seriously folks, nobody in the government cares about this illegality and most of America’s LIVs don’t either. Time to move on…

What the Democrats do, in particular Hillary, could make Nixon blush. Heck, Nixon looks like a saint compared to Hillary.

Libraries, What are there no cemeteries in Nevada

Hillary Clinton, and any satellite of operation using her name and under her influence, is simply not capable of not being illegal. She is an unerring, unstoppable machine of immoral output. It’s a miracle she’s not in jail already. (And a statement of our broken justice system.)