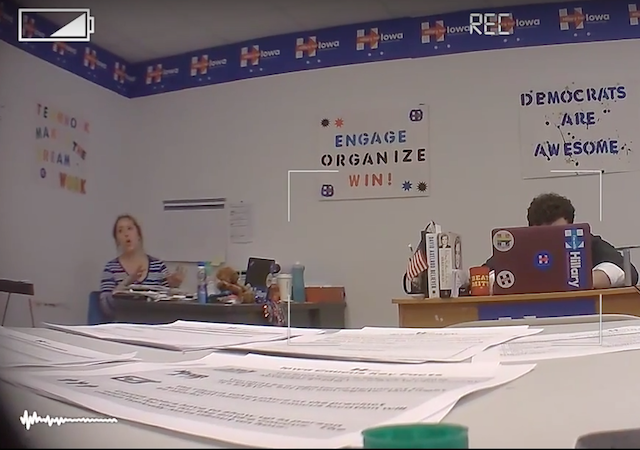 James O’Keefe’s Project Veritas has released the first in what they say is a series of videos exposing lawlessness within Hillary Clinton’s campaign.

O’Keefe has targeted leftist groups in the past over voter registration practices—and now, he has taken that fight directly to Clinton’s grassroots operation. He claims that his undercover journalists have found Clinton operatives employing a cherry-picking method of registering new voters.

“This is just the tip of the iceberg,” says James O’Keefe, the group’s founder in the clip.

Filmed by hidden camera by Project Veritas supporters posing as Clinton volunteers, the video shows a Clinton campaign staffer discussing strategies for targeting voter registration efforts. The campaign’s policy is to register all those who ask to register, a fact the staffer repeats.

But the staffer is also seen encouraging the “volunteer” to first ask whether the Iowans they encounter are Clinton supporters before asking if they are registered to vote. “We don’t want to make our focus be voter registration, because then we have to, like, register everyone regardless of whether they’re supporters or not,” the Clinton organizer is shown saying.

It’s important to note that this video doesn’t show volunteers or paid staff actually violating the law; however, Project Veritas says that all the same, the campaign’s efforts to register only Hillary supporters skirts Iowa election law. Either way—it’s a terrible optic for Team Hillary.

Last week, Team Clinton put all of its field offices on alert after hearing whispers about possible infiltration by conservative groups. We’ll keep you updated on further developments from Project Veritas’ sting.

How its it, o Legal Insurrection website, that your embedded videos all too frequently show a circled exclamation mark and fail to run?

Not having a problem in either Opera or FireFox. Maybe try another browser? However your problem (with the circled “!”) seems to indicate a service provider or bandwidth problem. (I believe that indicator appears when a video “times out” for failure to connect quickly enough.)

Eureka, we’ve found it! The center of the universe!

I would suggest that you do what I do. Create a temporary directory the use JDownloader http://jdownloader.org/download/index to download files to that directory.

Oh, MY!!! I bet this is “edited”. (Which is the MOST broke-dick defense you can imagine.)

At least from this video, it sounds like there’s no there there.

But Veritas claims, nonetheless, that the campaign is “skirting the law” by first asking whether potential voters are supporters before making the registration offer.

This approach to training volunteers is standard operating procedure across field campaigns,

That’s my take on it too. This by itself is nothing.

But the end of the video seems to indicate that this is just a “teaser” to raise the subject, get Democrats to go on the record denying that anything over-the-line has ever happened, then the big bombs drop later.

That was my reaction too, along with the feeling that a steady drip, drip, drip of negative news can’t be helping.

If this is just the opening shot, maybe the headline would more appropriately be “Proj Veritas Just Dropped A Flare” and is now on-target. Godspeed O’Keefe and colleagues!

I certainly hope so. O’Keefe has a good record, but he does sometimes stretch legal interpretations farther than they will go.

When I was trained to scrutineer the vote counting, we were taught how to identify an invalid vote, and then told that before opening our mouths we should check who the vote is for. If it’s for the other side, challenge it; if it’s for our side, keep your mouth shut. The other guy has a scrutineer too, and it’s his job to challenge invalid votes for our guy; if he didn’t notice it, that’s his tough luck. Again, O’Keefe seems to think that this would be illegal in Iowa.

There is certainly no violation of the clause quoted above, and yes, it is standard practice to seek out supporters or leaners to register. That alone can’t be against the law.

But it is the first, and a Time Magazine report, which makes it likely the least damning of the series and with possibly the most serious violations edited out.

Let’s hope so. If anyone can take the Wicked Witch of Westchester down, O’Keefe may be the one.

Does a cow eat corn?

Check out Sarah’s LinkedIn profile–she’s packed a lot of loony leftism into a very short career.

This is hitlery, of course there are lies, cheating and whatever other shenanigans going on.

From my layman’s standpoint… if they refuse to sign up people who ask, that’s a problem. If they’re just trying to make sure their own supporters are registered (and can legally register to vote), that’s just politics.

Of course Mrs. Scum is. That’s why she’s going to be humiliated once again.