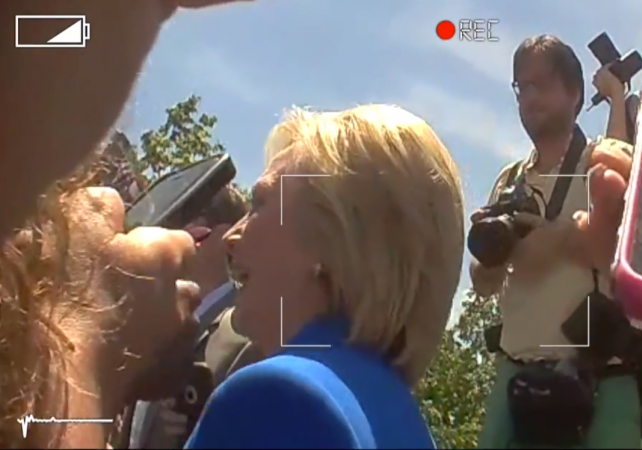 To their credit, the staffers recognized receiving donations from anyone who is not an American citizen was in direct violation of FEC laws, and said as much.

When PVA’s undercover reporter asked if she could take the Canadian woman’s money and use it to make the purchase herself, the senior staffers agreed.

Although the American happened to be one of Project Veritas’s staff members who used a fake name, Mr. O’Keefe made the case that the video showed a willingness by the campaign to skirt laws that forbid taking donations from foreigners by using a conduit. The transaction amounted to $75, and Project Veritas has asked Mrs. Clinton’s campaign to refund the money.

“They have demonstrated a willingness to contravene the law,” Mr. O’Keefe said.

…While Mrs. Clinton’s campaign denied breaking any laws, Mr. O’Keefe and his lawyer, Benjamin Barr, acknowledged that Project Veritas did act illegally by facilitating such a donation but that the infraction on their part was so minor that it was akin to jaywalking.

Although campaign finance violations are a serious issue, Mr. O’Keefe’s presentation drew some snickers from the reporters that Project Veritas had convened for the event. He struggled to justify breaking laws and using fake names to find wrongdoing, and at one point Mr. O’Keefe was asked pointedly, “Is this a joke?”

Brushing the question off as ridicule, Mr. O’Keefe maintained that the organization was acting for the greater good to shine a light on corruption in politics and that more videos would be trickling out from its team of investigators who are spread across the country and infiltrating campaigns. Claiming not to be partisan, he said that Republican candidates should be ready, too.

“We are going to create an army of exposers,” Mr. O’Keefe said. “We’ve got more.”

The FEC has not provided comment and Clinton’s campaign denies any wrong doing.

Author’s Note: The Author worked with James O’Keefe and Project Veritas as an Investigator and Project Manager in years past.

Would this be the same FEC that allowed unlimited foreign donations to the Obama campaign via credit card?

That is not true. The FEC did not allow any such thing. The 0bama campaign reported that all donations came from domestic sources, and there is no direct evidence that this wasn’t true. The problem is that the campaign deliberately disabled the credit card verification that comes standard with the software they were using, so it would have been easy for donors to lie about who and where they were. For that matter, it would also be easy for people to make fake donations with invalid credit card numbers, which would bounce, but in the meantime would bump the campaigns reported donations.

Now you and I and every other reasonable person knows that when someone goes out of their way to enable fraud, it must be for a reason. But that’s not evidence. It’s just our knowledge of the way the world works. Without the verification it’s impossible to tell whether there were any illegal donations; all we can definitely say is that if there weren’t any then the campaigns effort to make them undetectable was wasted.

“…when someone goes out of their way to enable fraud, it must be for a reason. But that’s not evidence…”

Of COURSE it’s evidence! They ‘went out of their way!’

Both these statements are wonderful evidence of intent.

Seriously, Milhous: political hackery aside, why do you post here?

As far as I can tell you are the hack. The fact that they went out of their way to enable fraud to happen is not evidence of fraud. There is no evidence of the 0bama campaign receiving illegal donations, because they made d**n sure there would be no evidence.

It’s the same as Clinton’s email: the fact that she deleted a message that may have contained evidence of bribery is not proof of bribery; we can suspect her of it but we can’t know it for a fact, and she certainly can’t be prosecuted for it.

Unless you’re stupider than you sound, you know all this very well; so why do you pretend otherwise?

I love how the NYT referred to O’Keefe as a “stalker” multiple times in that article. Is that what they call their own reporters?

Imagine if O’Keefe ran a newspaper?

Message to Sheldon Adelson: stop wasting your money and our time on the hacks hogging the GOP (Boehner probably drinks half of it, anyway) and put some of it behind the likes of James O’Keefe.

How about the macaca who was stalking Sen. Allen?

“He struggled to justify breaking laws and using fake names to find wrongdoing,”
The police, DEA and FBI do it every day. Or do people think they make those drug buys using their real names?

Yes, but they are legally allowed to; reporters are not. Policemen have a special legal status; reporters don’t, and have no rights that the rest of us don’t.

They’re burning the rules like a U.S. Benghazi embassy……

No, they’re not, at least on the evidence O’Keefe has released so far. A campaign is under no obligation to enforce the law on other people. It just can’t break the law itself, and so far we don’t know of any instance in which the campaign has broken the law, even in the de minimis manner in which the Project Veritas people did.

Is the buying of campaign swag, a campaign donation, or is a business transaction?

The legality might depend on whether or not the Canadian gave the money as an unconditional gift to the American citizen, or soley for the purpose of buying the swag. The person who would viuolate the law, though, would be the American who bought it, not the campaign, although it might have to return the money (or whatever money they charged above fair market value) I

The $75 is probably too trivial to worry about – names of people who donate money are not published if the amount is below $200.

It’s a grey area. If the Canadian really wanted the swag, and was willing to pay the price just to get it, then it would be legal for the campaign to sell it to her. But if she intended it as a donation then it wouldn’t. The campaign was being cautious in refusing to sell directly to her.