If people are offended, that’s their problem. 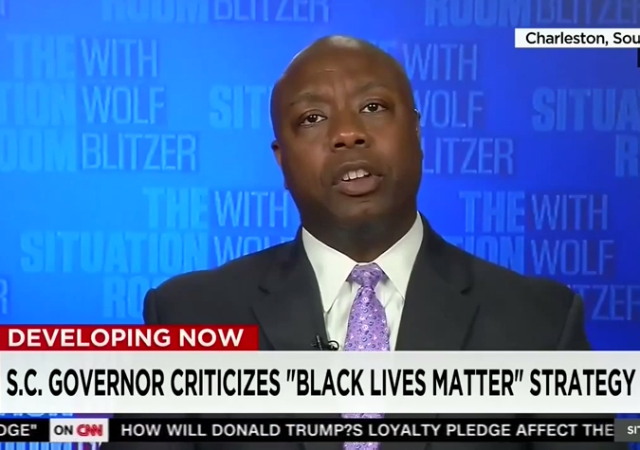 Republican South Carolina senator Tim Scott appeared on CNN yesterday and was questioned by host Brianna Keilar for saying all lives matter. His response was brilliant.

Josh Feldman of Mediaite has a partial transcript:

Sen. Tim Scott: If ‘All Lives Matter’ Really Offends You, That’s Your Problem

Senator Tim Scott said tonight that if people are honestly offended by him or anyone else saying “all lives matter,” that’s their problem.

On CNN tonight, Scott told Brianna Keilar, “If it causes offense to say that all lives matter, black lives, white lives, police officers… if that is somehow offensive to someone, that’s their issue, not mine.”

Here’s something you may not know about Tim Scott. He’s leading the charge to prevent Obama from bringing Gitmo detainees to the American mainland.

After accompanying Pentagon officials on a tour Wednesday of the Navy brig near Charleston, U.S. Sen. Tim Scott said he remained opposed to plans to transfer terrorists now held at Guantanamo Bay in Cuba to a mainland U.S. prison.

“The only solution is enemy combatants must stay in Guantanamo Bay,” Scott, R-S.C., said during a news conference outside the main gate to the Navy base. “One thing that’s completely clear, without any question, there is no compelling reason to close down Gitmo.”

SC must be schizo — one extremely fine Senator, Tim Scott. And the other Senator, a complete a**hole.

…if that is somehow offensive to someone, that’s their issue, not mine.”

Sen. Scott obviously has no concern for liberal heads.

Or the mess they make when they explode.

…Just one of his several endearing charms

I see a backbone growing in Republicans. Principles matter.

I see the caption on the screen shows Charleston, SC, where a killer decided to start a race war by shooting up a prayer meeting in a church. He did not get his race war. Unlike Ferguson and Baltimore, no buildings were burned, no black businesses destroyed.

There must be a lot of people like Sen. Scott in Charleston.

…without any question, there is no compelling reason to close down Gitmo.

Oh, yes. There is.
King O promised to.
You don’t want the King to feel bad any of the 48 times a day when he looks at the mirror.

Now that we’ve normalized relations with Cuba, there’s no legitimate reason to keep Guantanamo Bay. The lease is up and Obama will turn the whole base over to Castro. Mark my words, the entire base will be closed by 2017.