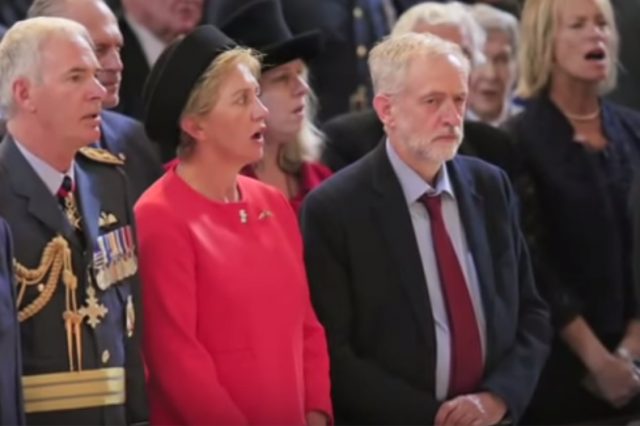 Jeremy Corbyn is the radical leftist anti-Israel British politican with very shady associations who recently was elected leader of the Labour Party.

The Conservative Party, which last spring won a resounding victory, was celebrating because Corbyn is deemed unelectable at the top of the Labour Party ticket in a General Election.

Corbyn’s associations are so toxic that Clinton operatives have been trying to portray Bernie Sanders as the American equivalent of Corbyn. The Free Beacon reports, Pro-Clinton Super PAC Goes Negative, Compares Sanders to Corbyn:

Liberals on social media criticized attacks against Bernie Sanders by a pro-Hillary Clinton Super PAC that compared the Clinton competitor to notorious anti-American socialists in Europe and South America.

“David Brock is a cheap fucking mercenary, all he did was switch sides,” said progressive writer Adam Johnson on Monday in response to a Huffington Post report on the new attacks from the Brock-run Super PAC Correct the Record.

The group sent an email to supporters on Monday comparing Sanders to Jeremy Corbyn, the new UK Labour Party leader, who has compared U.S. actions in Iraq to those of the self-proclaimed Islamic State, among other anti-American comments.

The Correct the Record email highlighted Corbyn calling Osama bin Laden’s death “a tragedy” and members of terrorist group Hezbollah his “friends,” according to the Huffington Post.

Bernie is not happy with the comparison, as reported in the British Guardian newspaper: Bernie Sanders rejects ‘vicious’ attack over his support for UK Labour leader:

An uneasy truce between Democratic presidential frontrunners Hillary Clinton and Bernie Sanders broke down on Tuesday as the Vermont senator accused a group associated with the former secretary of state of a “vicious” attack on his support for new British Labour party leader Jeremy Corbyn….

“Yesterday, one of Hillary Clinton’s most prominent Super PACs attacked our campaign pretty viciously,” said the senator in a statement sent to supporters. “They suggested I’d be friendly with Middle East terrorist organizations, and even tried to link me to a dead communist dictator.

“It was the kind of onslaught I expected to see from [Republican donors] the Koch Brothers or Sheldon Adelson,” he added.

Corbyn’s time as Labour Party leader is off to a roaring start.

Just yesterday, as leader of the main opposition party, he attended an event paying tribute to those who fell during the Battle of Britain in World War II.

When the British national anthem was played, Corbyn remained silent as others sang God Save the Queen.

Corbyn is insulting Britain's war heroes: Corbyn refuses to sing God Save the Queen at Battle of Britain service http://t.co/SkDjjxAaXa

Not to worry, though. Corbyn only is the leader of the Labour Party, not the Prime Minister.

It’s not like a radical leftist with shady associations who disrespects the national anthem could get elected to the highest office in the land.

Well, at least he’s not bashful about his intent to “fundamentally transform” Great Britain to “Whittled Down Britain” along the lines of the Obamic Decline.

I agree with the sentiment, but I don’t think even Corbyn would want to physically reduce Great Britain’s size. That would be a major civil engineering project, though. It would create a lot of jobs, though, and if you did it by digging a ditch between England and Scotland the SNP might support it 🙂

As I understand, he’s openly for cutting Ireland lose.

Um, Ireland was cut loose from Great Britain about 14000 years ago 🙂 I don’t think Corbyn can do anything about that.

But ACTUALLY that would have been England that Ireland was cut loose of…or Anglia or some damn proper geological term.

Do you mean because what’s now Great Britain was then still attached to Europe?

My point was to gently remind you that Great Britain is the island, not the political entity. Its greatness is purely geographic, and the only way to stop it being Great Britain would be to reduce its size by about 60%. (Even my suggestion above, of a ditch separating Scotland from the rest of the island, would still leave it the greatest island in the group.)

I think you mean, “Northern Ireland”, since the rest of the island won its independence about 90 years ago.

If the North was to become independent it would be open civil war within a month followed by intervention by the Republic of Ireland. The Provos would make sure of it. That in turn would set off even worse strife as the Prots would go open season on Catholics all over the island.

The only thing stopping civil war even today is the presence of British troops backing the Ulster constabulary police. If England (because at that point I’d imagine the Scots would be out) pulls out of Ulster, it’s a bloodbath on the Emerald Isle.

Good to see the Labour leader step off on the left foot. Now everyone will know that when he does appear patriotic (“patriotic” should be pronounced with a short letter “a” in this post) it will be nothing but optics. Even Hillary understands optics, as can be seen in the final pic to the article.

Smartest thing the Tories could do, if they were interested only in their own political dominance, would be to let the Scottish National Party have its way and move Scotland to independence.

England / Wales / Ulster would be 80% Tory at that point. Labour would never win another national election. What gave Labour its edge was Scotland. When the Scots abandoned them for the SNP, Britain got Mr. Cameron as PM.

And that’s precisely why I hoped the Scots would vote “yes”.

It is hard to imagine how long this contention between Scotland & Britain has gone on & still is explosive.

What contention? What on earth are you talking about? Scotland is on Great Britain, how can it be in contention with the ground it stands on?

And if you meant the UK my question stands. Scotland is part of the UK; how can there be contention between them? Where have you seen signs of such contention, let alone anything explosive? Do you have the faintest idea what you’re on about?

At the first time that our pres. & first lady didn’t salute our flag, They both should have been arrested & removed from office & position. I have noticed that she/he doesn’t dislike spending taxpayer money.

WTH? Arrested for what, fercryinoutloud? And removed from office? On what grounds and by what authority?