“They chant ‘death to America’ 24 hours a day, seven days a week, and we ought to take them at their word.”

Today I attended the much-anticipated Cruz-Trump Iran deal protest on Capitol Hill. It was a scorcher—97 degrees when I finally surrendered to an air conditioned cab—but the rally boasted an impressive turnout.

The crowd, for the most part, was focused on protesting not only the specific Iranian nuclear deal, but the path down which Obama’s foreign policy has taken us. 100% of the attendees I talked to see the deal as one more foolish, stupid, naive move by the Obama Administration. For most, opposition was apolitical; I spoke to many people who were grateful for the protest votes of Chuck Schumer and other Democrats, even if those announcements came too little and too late to give the White House pause.

These signs were floating around everywhere, and for the most part sum up the mood in the crowd:

JoAnn Abbott, an organizer of the 2009 tax day tea party rally in Washington, DC, came to today’s rally because, as she put it, “I have grandchildren I want to see grow up.”

Ann McLaughlin, a native Washingtonian, told me that she came because she is “horrified at the direction” that President Obama is taking this country. She said she believes that the nuke deal abets and empowers our enemies, and that Obama is “walking away from our allies” (namely, Israel.)

For many attendees, their frustration lay not only with Democrats vocally supporting the deal, but with Republicans they believe aren’t fighting back hard enough. Tom Zawistowski, a tea party leader from Ohio, came to Capitol Hill because he’s angry at how both Republicans and Democrats have handled opposition to the Iran nuclear deal. “We came to the rally because we think this is a bad deal,” said Zawistowski. “The common people of Ohio see through this. This is not a deal that’s to our benefit, we don’t understand why we’re making it.” He went on to explain how he believes the tea party movement has changed since its first major rally in DC back in 2009, and served up a warning to complacent Republicans, saying that conservative activists aren’t afraid to hold their representatives accountable.

As I walked through the crowd, I saw enormous support not just for our own congress critters voicing opposition to the deal, but for our allies in Israel who have spoken out against doing business with Iran. I talked to several activists who were concerned about the growing divide between the United States and Israel; some expressed doubt as to whether or not the alliance could ever repair itself if Obama and the Democrats manage to get this deal shoved through Congress.

One attendee, Gary Jaffae, came to support Israel, and to support members of Congress who are voicing their opposition to the deal. He was vocal about his concerns that Iran will use this as an opportunity to start an arms race in the Middle East.

“This is the first time America has made a deal with the enemy,” Gary told me. “Iran proves that they’re going to use these weapons, because they announce it every day that they want to annihilate Israel. They chant ‘death to America’ 24 hours a day, seven days a week, and we ought to take them at their word.”

I think we should, too.

I wanted to include a few crowd shots, lest the Democrats claim that the anti-deal crowd held a protest and no one showed up. Like I said above, it was hot in DC today. The crowd hung on to hear Ted Cruz and Donald Trump, but started to clear out mid-Sarah Palin. They made their point, though. 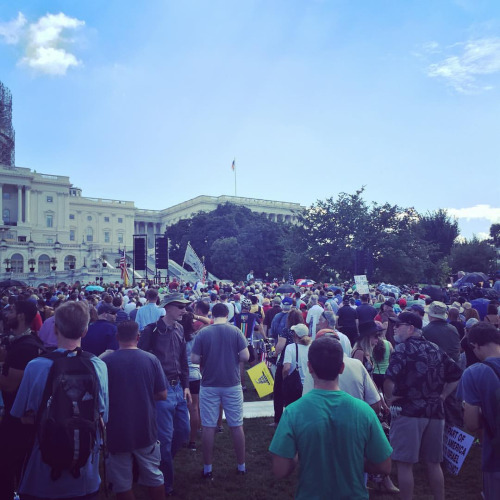 Iran, US House, US Senate

This was NOT a “Cruz-Trump” Iran Deal Protest.

THIS WAS A EFF’in *CRUZ* IRAN DEAL PROTEST!!!

Trump Was A *Guest.* He was a guest because this protest is not a campaign event, it’s about preventing the Nuclear Destruction of Israel & this Nation With First Strike Nuclear Weapons.

Every citizen of both countries owes Ted Cruz a debt of gratitude and support in this effort for what he is trying to stop for us all.

It would have made more sense to hold the rally a week or two ago, before Senate Democrats had been fully pressured to stick with Obama.

Those in the know have said it was some of the toughest lobbying by a White House on their own party in Congress in memory, the threats were overt. But it is important to never let the Democrats who favor the deal live it down. Some in the Senate won’t be up for reelection until 2020, but it still needs to be an issue.

There was a critical House vote today on allowing the 60 clock to start ticking… not weeks ago, today.

This Protest actually stopped that vote & prevented that clock from starting.

You damn right. The Only Good Terrorist Is a Dead Terrorist.

Vote on Iran Deal Postponed Over A Senator Cruz-Instigated House GOP Revolt Against Establishment’s Go Along To Get Along Efforts To Start The 60 Day Clock Ticking.

Nancy Peolsi: “It’s cute, but this thing has a deadline.”

Amy Miller? This article is as lifeless and dry as yesterday’s toast.

CNN could have written this and no one would know the difference.

And… we have a parting shot at Sarah Palin…

“The crowd hung on to hear Ted Cruz and Donald Trump, but started to clear out mid-Sarah Palin.”

And, by omission, Sarah Palin said nothing of interest to LI readers?

What about the other speakers? Mark Levin, for example?

What did the notable speakers actually SAY that was quote worthy? Nothing?

Then there is a photo of a discarded protest sign with verbiage saying many of them were ‘floating’ around. I know *exactly* what that conveys subliminally.

I fired a writer I took on at my blog for these kind of off-mission stunts.

Listen, I know how to write articles and pick photos to subliminally steer readers.

I can make a #BlackLivesMatters gathering look like a prayer meeting or a civil revolt.

Where is any mention that This Protest Actually Stopping A House Vote That Would Have Allowed The 60 Day Clock To Start Ticking?

THAT IS THE BIGGEST NEWS OF ALL!

You may be fooling some people, but you are not fooling me with this kind of writing, Amy, with all due respect.

The problem is that he agrees.

“They’re not anti-war. They’re just on the other side.”