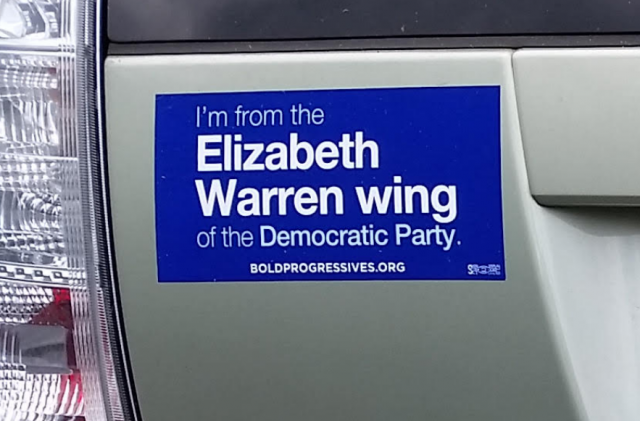 Just took this picture in a retirement home 15 minute parking space…so probably owned by a baby-boomer who has a parent in the retirement community. 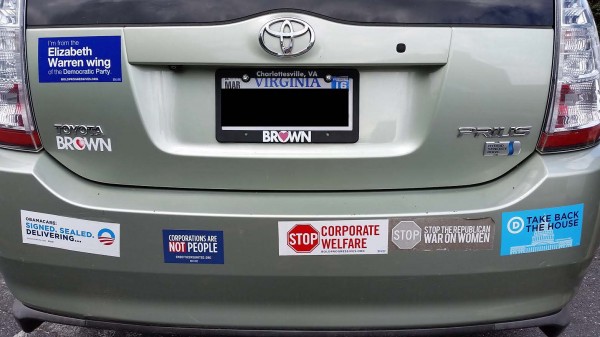 You know, I’m also from the Elizabeth Warren Wing of the Democratic Party.

I want her to run.

I think we have a winner for the Most Barf-Worthy Bumper Sticker Display Since Time Began!

I thought the Democrats only had one wing; the Left one.

No, it has two wings. The Left wing, and the Insane Left wing.

The latter also known as the Elizabeth Warren Wing of the Home for the Certifiably Insane.

Isn’t that just another call to defund Planned Parenthood in particular and all federal funding of non-profits in general?

I agree with one of those, which begs the question “which one of these doesn’t belong with the others?” And it makes me wonder if the owner is aware of how even Warren would support certain types of cronyism and corporate subsidies.

The LAST people who will do that are Collectivists, because the LOVES them some fascist economics.

But we’ll just have to wait for that until the next conservative POTUS.

“Stop the Republican War on Women”

Keep the Democrat’s War on Women alive and well.

How come every Prius I see on the road has a bumper sticker on it displaying how stupid they are?

I am conflicted. We just bought a used Nissan Leaf (which makes a Prius a “Carbon Criminal” by comparison), and I am thinking of putting a bunch of bumper stickers on it. I asked my husband what would make heads explode – “Coexist” on one side with NRA sticker on the other? “W”? “Mama Grizzly”?

Oh…BTW, the stickers must be the type that don’t actually stick. I don’t want to get the car keyed. :o)

I think you answered your own question…….

Monster entities of health care, education, banking and trade, all get twisted like pretzels when intermingled with big government, with the working middle squeezed to provide the dough.

Corporate money people haven’t acted as an “opposite” to the leftist unions, as I’d hoped in my “level the playing field” dream. Add to that Team Clinton sneaking their marching band of foreigners into the pillaging, through their “Bribes R Us” foundation. All that money buys influence, not liberty.

Government has a big role in maintaining freer markets and stopping racketeering, but middle America has been the golden goose of special interests (foreign and domestic) for a very long time. These are enemies to the voice and very survival of “we the people”. We need a hero, or a million points of light … something.

Warren’s version of American exceptionalism is “you didn’t build that”, you’re just another brick in the wall. But illegals to Warren, are the dreamers. At least she favored transparency in TPP negotiations.

You say that because you think there’s no chance she could win.

Eight years ago, when Obama knocked Hillary out of the race, many celebrated because, after all, there was no way such a hard left, inexperienced, and vapid empty suit could ever actually win.