“to the rights and freedoms of ordinary citizens” 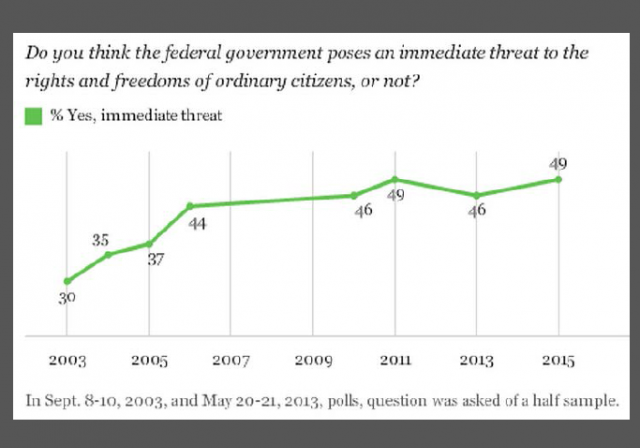 Gallup released an interesting poll this week showing that nearly half of all Americans view government as “an immediate threat to the rights and freedoms of ordinary citizens.”  Interestingly, this is “similar to what was found in previous surveys conducted over the last five years”; however, “when this question was first asked in 2003, less than a third of Americans held this attitude.”

The latest results are from Gallup’s Sept. 9-13 Governance poll. The lower percentage of Americans agreeing in 2003 that the federal government posed an immediate threat likely reflected the more positive attitudes about government evident after the 9/11 terrorist attacks. The percentage gradually increased to 44% by 2006, and then reached the 46% to 49% range in four surveys conducted since 2010.

The remarkable finding about these attitudes is how much they reflect apparent antipathy toward the party controlling the White House, rather than being a purely fundamental or fixed philosophical attitude about government.

It’s no accident, for example, that when Democrats start and/or renew pushes for gun control, gun and ammo sales skyrocket. Of course, this isn’t just about gun control; it encompasses everything from government surveillance to over-regulation to fundamental First Amendment rights.

The most frequently mentioned specific threats involve gun control laws and violations of the Second Amendment to the Constitution, mentioned by 12% who perceive the government to be an immediate threat.

Other general complaints enunciated by smaller numbers of those who think the government poses an immediate threat include perceptions that the government is “socialist,” that the government spends too much, that it picks winners and losers such as the wealthy or racial and ethnic minorities, that it is too involved in things it shouldn’t be and that it violates the separation of powers.

More specific complaints — again voiced by small numbers of those who agree with the threat statement — focus on freedom of speech, freedom of religion, the overuse of police and law enforcement, government surveillance of private citizens including emails and phone records, government involvement in gay marriage issues, overregulation of business, overtaxing, the healthcare law and immigration.

In short, the bigger and more intrusive government gets, the more the American people see it as a threat to their individual liberty.  Obama’s efforts to make big government seem “cool” or an integral, necessary part of our lives (remember Julia and the cradle to grave vision of government dependency she represented?) have failed abysmally.

The headline should have been: “Gallup: 51% Aren’t Paying Attention”

This gov is supposed to represent the public. Instead we have had to swallow one unconstitutional policy after another while the elected officials thumb their noses at us for daring to oppose what they are tell us is good for us. They want to confiscate more of our money to pay for imposing more tyranny on us. We get molested at the airport, forced to accept an influx of illegal immigrants and told that we are too stupid to control local issues like marriage, education, road repair and policing. Why the heck to we need governors and state govs if the feds will just tell us how it’s going to be?

Time to lock & load just like our founding fathers did. There is no political solution to the mess we’re in.

100% of the founding fathers saw the government as an immediate threat.

Bingo. It just appears that, over time, 51% of us have forgotten.

Their ability for critical thinking has been lobotomized by government schools for the past 2 generations.

A citizen needs only to take a walk to the store and know this government is a threat. Cameras focused on your face everywhere you go, iris and fingerprint scans for ‘security’ purposes, x-ray your body at the airport, video tape is always rolling, etc. and it’s clear you do matter to the leftists, enough to know where you are and what you buy, write, read or say.

Or what you eat, sure you’re free to buy groceries but certain far left cities will go through the trash to see if you’ve recycled. Your car (well, maybe not your VW)records your drive, brake too hard, over-use the horn, make middle of the night trips to Ben Carson’s headquarters and it’s recorded. Is the mike on your dashboard or the camera on your laptop really only on when you engage it?

I hate living under big brothers microscope and sure others do too. Our basic freedoms to move from place to place are under attack now that they’ve got our healthcare they’ve got our medical history, and they’ve got our cash flow. This could all be used in very un-American ways, it’s time to vote only for people who will tone this down.

Wonder why people feel that way?

If you like your Dr and can keep your Dr.

The middle class family will save $2000 on health insurance.

I am actually surprised that the number is that high, it gives me some mild hope.

Now the people who should really be worried by that number is the government.