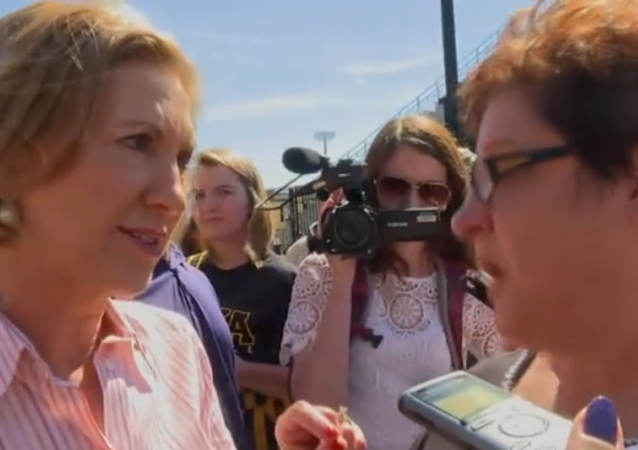 The headline at most websites covering Carly Fiorina’s campaign today is that Planned Parenthood protesters threw condoms at Fiorina, via ABC13 in Iowa:

Planned Parenthood protesters threw condoms at Carly Fiorina today while she campaigned at a tailgate party for the Iowa Hawkeyes.

The protesters, some of whom were affiliated with the women’s health group and others who were supporters, were dressed in pink and waved pink pom-poms as they followed the Republican presidential candidate around the tailgate, chanting “Carly Fiorina offsides for telling lies” and “women are watching and we vote.” 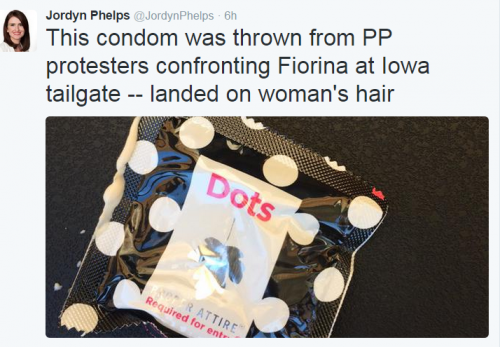 Expect to see more such Code Pink-style tactics against Fiorina.

But to me the more interesting story is how Fiorina faced down a woman who confronted her face-to-face, via CNN:

On Saturday, activist and 40-year Planned Parenthood patient Cindy Shireman, 54, challenged Fiorina for her comments about the organization.

“How can you, as a woman, not support our health care?” Shireman asked.

“Oh, I support your health care. I don’t support the butchering of babies. And you should go look at those videos,” Fiorina replied.

Shireman said she had seen the videos and Fiorina fired back forcefully.

“I understand we may disagree on things. You need to ask yourself some questions. Why is it that fetuses are aborted alive to butcher their brains? Why? You ought to also ask, you should look at some facts. How much money does Planned Parenthood give to Democrat candidates? This a big political rig,” Fiorina said, jabbing her finger in Shireman’s face.

At the end of the heated back-and-forth argument, Fiorina told Shireman to get her facts straight.

Fiorina facing down the protester reminds me of when Ted Cruz did a similar thing to a Code Pink protester over the Iran nuclear deal.

Republicans want someone who will fight, and will overlook some policy differences or past policies infractions to get a fighter. That in part explains the Trump phenomenon, and it explains Ted Cruz’s popularity (with him you get the fight without the policy problems).

Fiorina is rising because she shows fight. Today was a good day for her campaign.

Can we get one that’s not noxiously drenched and dripping with Gang of Eight Amnesty, Dream Act, and H1B VISA sauce?

It won’t be easy.

Arguments for human and civil rights fall short when they are predicated on the violation of human and civil rights. We could argue for rights and privileges based on common interests, but we will fail to mitigate progressive corruption without reconciling first principles: individual dignity, intrinsic value, and natural imperatives.

Good. Be angry. Stay angry. These people don’t like it when you get back in their faces. They’re kind of shocked. They don’t have facts and don’t know how to argue. They hurl talking points. They need to be humiliated.

When did us “conservatives” concede the point that “women’s healthcare” is a commodity that can only be served up as a “goody” granted to us by the benevolence of our dear leaders?

Just once, once, I’d like to see a politician look one of these people in the eye and say. “You live in the USA. You have the freedom to go out and earn, learn and provide for yourself. You don’t need for an organization to spend millions of dollars buying politicians who will tax you so that they can grant your money back the that organization, pay for all their executive excess and filter a small chunk back to you with sub-standard HC services. I want to live in a world where there is a competitive healthcare market that competes for your business. I want you to have the dignity of earning your keep and choosing the provider of your choice and have the ability to pay that provider directly.I don’t want you to ever think you have to supplicate yourself before congress and beg for a PAP smear or a birth control pill. Why in the world do you want to live in a world where your choices are limited by decisions made by the likes of me?”

Conservatives are too nice and have been allowing the prog drones to co-opt the language for way too long. Crap likes this… “women’s healthcare = butchering live babies for brain tissue to study”… is the result.

Did the protester work at the Deutsche Bank?

One of the protesters asked CF if she was being paid to take that stance. A better retort would be to ask the protesters if they were being paid. Those costumes they had were not whipped up in a afternoon.

If they’ve got enough spare condoms to toss at political candidates, there’s no reason why those stupid twits should be worried about their ability to obtain an abortion.

“40-year Planned Parenthood patient Cindy Shireman, 54,”
She had her first abortion at 14? How many has she had since then?

She looks like a big, fat case of denial to me.

I’ll bet the farm she never found a husband.

Um, PP does more than abortion. We don’t know what care she’s been getting from PP, or whether she’s had any abortions at all. So let me just guess and say “15”. But it could just as easily be zero.

True. We know for a fact that they can do a kick-ass mammogram referral letter!

Seems no one thinks it’s important but me.

I don’t want this politically correct woman anywhere near the oval office. We have enough muslims without another muslim apologist in the WH.

It’s very nice she’s right and aggressive on one problem. That is not enough. We’ll have plenty of other butchering when muslims take over our country.

Fiorina is a good talker; too bad she’s not even close to being a conservative, and is fully puppetized by the GOPe.
Here’s what Bill Still found out about her (found this at Market-Ticker:)

Like many Conservatives I too am tired of the namby pamby aw shucks attitude of so many so called elected Conservatives who are Repiblican. Yes, Fiorina my not be perfect but at least she is showing a fire and some balls when most GOP candidates just want to get along with the democrats and then chuck their “conservative beliefs” out the door to be liked.

This is why many voters are tired of the same old nonsense from the Republican Party.