“This is the president’s problem” 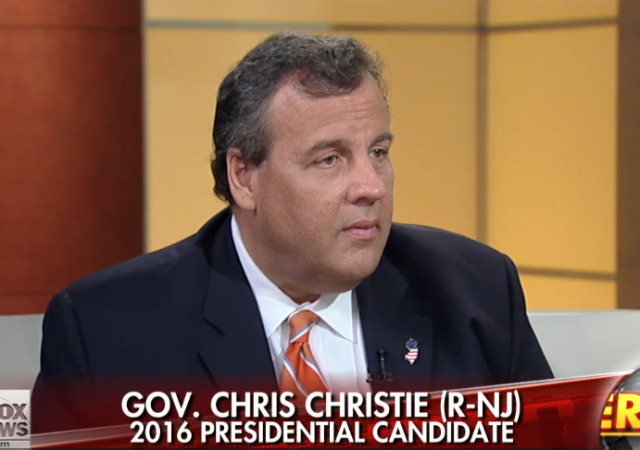 New Jersey governor and 2016 Republican presidential candidate Chris Christie appeared on the FOX and Friends program yesterday and stated plainly that Obama deserves some blame for recent violence against police.

“This is the president’s problem, because he has not allowed law and order to be the rule of the day in the United States. Lawlessness has been the rule of the day,” Christie said in an interview on “Fox and Friends” after the hosts recounted recent killings of police officers in Illinois and Texas, and another shooting in Nevada over the weekend. “And now the president says little or nothing about these police officers that are being hunted.”

You can watch the video below.

Christie addresses anti-cop rhetoric in the first two minutes but if you have time to watch it all, he goes on to discuss the refugee crisis in Europe, the jailing of Kim Davis, Hillary’s email scandal and more. The entire segment is just under nine minutes long:

Christie was appointed a United States Attorney for the District of New Jersey by President George W. Bush in 2001 and is often an advocate for law enforcement.

As you might expect, he’s been a strong critic of NYC Mayor Bill de Blasio.

Chris Christie says he would bring back stop-and-frisk program

New Jersey Gov. Chris Christie said that if he were mayor of New York City, he would bring back the stop-and-frisk program, slamming Mayor Bill de Blasio for the policies he’s implemented.

“Stop-and-frisk would be back in about five minutes and we would empower the police, not undercut them,” Christie told MSNBC’s “Morning Joe” on Tuesday. “And listen, if police officers step over the line, then they deserve to be taken care of and prosecuted. But this mayor presumes guilt on the part of the police officers before anything happens.”

The contentious police program allowed police officers to stop a pedestrian and search them for weapons and contraband, but was sharply criticized by criminal justice reform advocates who said it unfairly targeted African-Americans. Christie said that de Blasio, who ran on a platform which included reforming the program, is not the only mayor to have implemented “liberal policies.”

“It’s the liberal policies in this city that have led to the lawlessness that has been encouraged by the President of the United States,” Christie said.

According to the Real Clear Politics average of polls for the Republican nomination, Christie is currently at a paltry 2.8 percent. Perhaps he’d be a better pick for attorney general.

I don’t think I really want to see Christie in any cabinet-level position.

I do agree with him WRT Barracula. But there’s just so MUCH you can rightfully lay at that doorstep!

The doorstep needs to be enlarged until it is as big as the bus.

Oh, look who’s trying to be relevant! Isn’t that precious?

Today’s Reddit has a thread on the Freddie Gray case, where the kiddies are all ready to lynch the police, pre-trial. Barack Obama has several times encouraged a rush to judgment, assuming the police were at fault, where it turned out later that the police were justified in their actions.

I find such behavior irresponsible and …odd, coming as it does from an alleged lawyer and purported Constitutional scholar.

These stories, cumulatively, tell me that the Acorn-Coffee Party-OWS-#BLM “activists” are desperate to find incidents of police brutality, and they are going with perjury and rumor early, because the police simply are not giving them that many cases of actual police brutality. This is like the Palestinians: where there is no offense, they just make one up.

Chris Christie says he would bring back stop-and-frisk program

How about just bringing back law-and-order?

Hey Krispy Kreme, it was a big personal problem for Officer Goforth. How about you go have another donut and STFU about “problems” like this was some accounting error.

I am so glad I’m old enough to control myself.