Slow recovery, or no recovery? 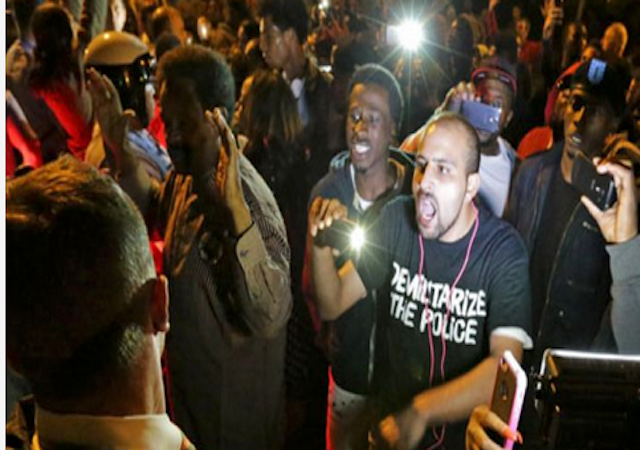 It’s hard to believe that we started talking about Ferguson almost a year ago.

For better, worse, or neutral, what happened in that town between teenager Michael Brown and police officer Darren Wilson has changed the way this country regards the ever-evolving relationship between citizens and the police. August 11th marks the 1 year anniversary of the day this quiet corner of the greater Saint Louis area exploded into chaos and violence, and city officials, local residents, and even those of us who watched from afar are concerned that renewed protests will once again overtake the streets.

>Civil rights activists, religious leaders and others from around the United States are converging on the mostly black community of about 21,000 to commemorate the life and death of 18-year-old Michael Brown and call for improvements in relations with police.

The events, many organized by Brown’s father, include marches, concerts and a moment of silence at midday on Sunday on the street where Brown was killed on Aug. 9, 2014.

“I’m expecting hundreds if not thousands of people,” said Tommie Pierson Sr., pastor of the Greater St. Mark Family Church, where a service honoring Brown is scheduled this weekend. “We are not anticipating any violence. However, you have to always be prepared.”

Pierson’s church held a “de-escalation” training session on Sunday to prepare for potential clashes between protesters and police this weekend.

The Ferguson police are doing their part by meeting with protest groups and coordinating efforts to keep people safe; but much of what was done to harm businesses during the first round of riots cannot be undone by teamwork and a commitment to peace.

Ferguson is in trouble; its economy, which never fully recovered in the wake of the 2008 financial meltdown, re-stagnated, and many of the business owners who had their shops destroyed or ransacked last year haven’t returned to pick up the pieces.

“People have seen the images of a city out of control,” said Brian Fletcher, a city council member and chair of a committee that has raised money for local businesses hit by the riots.

“It has been so difficult for the image of Ferguson this past year. It has been damaging to the economy,” he said.

With an annual operating budget of around $14 million, Ferguson’s deficit is forecast to increase to $3.2 million in the fiscal year ending in June 2016. That is up from $3 million the previous year and less than $1 million two years ago.

“We can’t stay in deficit forever, we may have to start laying off employees,” said Fletcher, a former mayor.

He said that could include cuts in the police department, since public safety accounts for about 60 percent of the St. Louis suburb’s spending. The department is down to about 50 police officers instead of the 54 budgeted for, which means some savings, but overtime pay in the final five months of last year went $222,000 over budget; another $500,000 has been allocated to overhaul the department.

What’s more, Ferguson has begun talks with the U.S. Justice Department over police reforms – which could cost millions – following a scathing report by the agency last spring. In it, the Justice Department said the mostly white police force routinely targeted blacks and showed a pattern of excessive force and illegal arrests.

The DOJ investigation has caused a huge strain with city council members, with at least one publicly saying that federal proposals to reform law enforcement entities would bankrupt Ferguson completely.

Tension still exists between Ferguson’s citizens, and its police force. A DOJ investigation following the riots concluded that police officers had been using the citizenry as a blank check, writing tickets at random and unconstitutionally targeting minority and low income people. Those people would, in turn, end up facing over the top penalties handed down by the municipal court system. Those accusations have been renewed, just in time for volcano day:

The city has issued more than 2,300 new arrest warrants so far this year and thousands of older warrants continue to haunt people — even as neighboring municipalities are wiping out old tickets or warrants entirely.

But that number, provided to CNNMoney by the state, only tells part of the story. So CNNMoney decided to zero in on the underlying offenses that are leading to these warrants. Getting this information wasn’t easy. At first, CNNMoney filed a public records request for data showing all offenses that have led to outstanding warrants, which was denied. CNNMoney then turned to a state committee of judges, which ultimately ordered Ferguson to release the city’s court records. But then the city said it doesn’t store these records digitally and could only make paper copies available.

So CNNMoney analyzed more than 700 pages of paper court dockets from the two most recent months available at the time, April and May.

For one Ferguson woman, an old ticket for an expired car registration resulted in a warrant that she didn’t learn about until she tried to renew her license several months ago. Meanwhile, her neighbor could be arrested at any time because of a ticket she couldn’t afford to pay for having an old, beat-up car parked in her driveway.

When the #BlackLivesMatter movement retakes the streets of Ferguson next week, will we see the highly organized political machine that dominated the news cycle for the better part of a year? Or more of the same chaos that left neighborhoods in ruins and a community left to pick up the pieces?

We’ll cover it here, whatever “it” may be.

You can read Legal Insurrections work on Ferguson here

There has been an absolute rash of false reports of police stops involving bad conduct. That have been disproved by video tape.

And, of course, the Bland arrest is another.

Where is Darren Wilson’s recovery? Doesn’t he count?

… and even those of us who watched from afar are concerned that renewed protests will once again overtake the streets.

I watched from afar, but my level of concern is about the same as my concern for the state of Obama’s golf game.

Did I miss the concern memo?

Sorry, failed, despite trying so hard I got dizzy. When people decide to destroy themselves, and then have the gall to blame others for it, for some reason I tend to laugh a lot.

A flaw in my character I suppose.

How can there be anything left to riot around about in Ferguson after Obama and the Dems incited so many riots there already.

What happens to a hair extension deferred?

From the article, it seems to me that the problems are the result of City Council actions/laws and the cops are just trying to enforce them. If Ferguson is 80% black then it stands to reason that more black people will be ticketed. It also falls out that because there are more black people then there are more poor black people. Is the police dept targeting poor blacks or are the numbers just a result of demographics? BTW, I don’t trust this DOJ to be objective. I’m not sure they even know what it means.