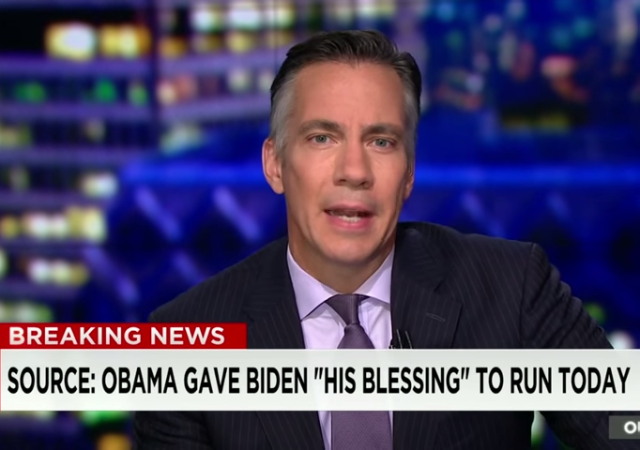 CNN reported last night that President Obama has given his blessing to a 2016 presidential run for Vice President Joe Biden.

This news isn’t completely unexpected but as Legal Insurrection readers know, it will change the landscape of the Democratic Party’s 2016 primary, especially if Elizabeth Warren is involved.

From CNN’s report by Jeff Zeleny and Peter Morris:

Vice President Joe Biden received President Barack Obama’s “blessing” to make a 2016 bid for the White House, according to a senior Democrat.

But that’s if Biden chooses to run — the decision is his. While he doesn’t need the President’s permission, of course, a potential presidential candidacy was among the topics of their lunch Monday at the White House. The President made clear he would not stand in his way or counsel him against a run, the senior Democrat said.

The Vice President was expected to huddle at his residence Monday night with Anita Dunn and Bob Bauer, the husband-and-wife team who have been at Obama’s side for much of the last decade, two people familiar with the meeting told CNN. Steve Ricchetti, the Vice President’s chief of staff, was also expected to attend.

Vice President Biden invited top Democratic donors to meet with him after Labor Day, the White House praised his “aptitude” for the nation’s top job and President Obama is said to have given his “blessing” Monday, heightening the buzz over the veep’s Oval Office ambitions.

BREAKING: From @jeffzeleny: senior Dem says Obama "gave his blessing" to Biden to run at lunch – if he chooses. Decision is his. @AC360

President Obama has allegedly given Joe Biden the green light to consider a presidential run in 2016 http://t.co/ocypW2aZGN

CNN's @wolfblitzer reporting that a source says Obama gave Biden his "blessing" to run. But would Obama really say anything else?

If Biden goes with Sanders as Veep, then we could have real BS!

Nah. Biden is demanding that Jarrod Fogle be his running mate….

Can’t wait to see Branco’s cartoon of the King bestowing his blessing on Slo Joe.

With a big sword and an “Oops, sorry about the ear, Joe!”

Somehow, the king wearing a tutu and using a magic wand to knight him makes more sense.

That’s the way we see him. I was thinking more about the way Obo the Clown sees himself.

The mighty King, the fearless Monarch, the Grand Poobah!

I have a feeling they’ll put off announcing a Biden/Fauxcahontus ticket as long as possible to allow the repubs to expend all their energy beating up on Hillary. There’s no way she’ll get through the primaries after the impending indictment.

Joe Biden is a first-rate fool, but don’t underestimate him: remember how poorly Paul Ryan fared in the the debate with him?

He has a “D” after his name. That is all that is required. The medias’ puckered lips also help.

I’ve been saying it would be Biden for the nomination since the week of the 4th of July. It is evident Hillary cannot survive – the bribery isn’t even investigated yet, there are dozens of instances of Donation = Approval by State, and no one who donated was turned down. If she avoids jail time, she should be grateful.

Biden offends no element of the party, he has no enemies and has been a dutiful friend of labor and loyal to Obama. He won’t be likely to win the general, but he could help alleviate the potential tsunami on the down-ticket.

And the GOP may always do something stupid like nominate a Kardashian.

Michael Mukasey, former AG from 2007 – 2009, has stated that Hillary has precluded herself forever of holding any public office, specifically the office of President by means of her on record verbal and written statements. Mukasey cited Federal Statue Law: Title 18. Section 2071.

(a) Whoever willfully and unlawfully conceals, removes, mutilates, obliterates, or destroys, or attempts to do so, or, with intent to do so takes and carries away any record, proceeding, map, book, paper, document, or other thing, filed or deposited with any clerk or officer of any court of the United States, or in any public office, or with any judicial or public officer of the United States, shall be fined under this title or imprisoned not more than three years, or both.

(b) Whoever, having the custody of any such record, proceeding, map, book, document, paper, or other thing, willfully and unlawfully conceals, removes, mutilates, obliterates, falsifies, or destroys the same, shall be fined under this title or imprisoned not more than three years, or both; and shall forfeit his office and be disqualified from holding any office under the United States. As used in this subsection, the term “office” does not include the office held by any person as a retired officer of the Armed Forces of the United States

Apparently Obama’s glass ball told him yesterday to jump early on to Joe’s band wagon before it heads out to the parade.

1. The presidency is not an “office under the United States”. (This is why it’s technically possible for a president or vice president to also sit in Congress, though a person would have to be insane to try to do both jobs at once.)

Obama has the goods on Hillary, so he can indict her at any time and force her out of the race. His plan was to do this after she got just about enough for the nomination in order to clear the way for a candidate that would NOT be vetted through the primary process. However, she is imploding so fast, that she may not make it to the first primary. So Obama needs a second candidate that he can pull the rug out in order for his non-vetted candidate to steal the nomination. He likely has similar information on Biden (and Warren), and thus feels confident that he can force him out for the unvetted candidate.

Oh, and who is this unvetted candidate? Michelle Obama.

Mark my words, when the Democrats meet in Philadelphia, the majority of the delegates to the convention will be free to select anyone due to their candidate being out of the election.

I don’t think Michelle Obama will be nominated, but if you are correct, do you really think Clinton’s supporters would support Obama if they thought her husband sabotaged Clinton’s campaign?

They have proven to be rather dumb – more than once in the past, so……..YES!

Exactly. I have been predicting for at least a year that the 0bama machine would run Michelle in order to get Jarrett a third term. Michelle doesn’t want to give up the good life.