Hillary may not know what hit her. 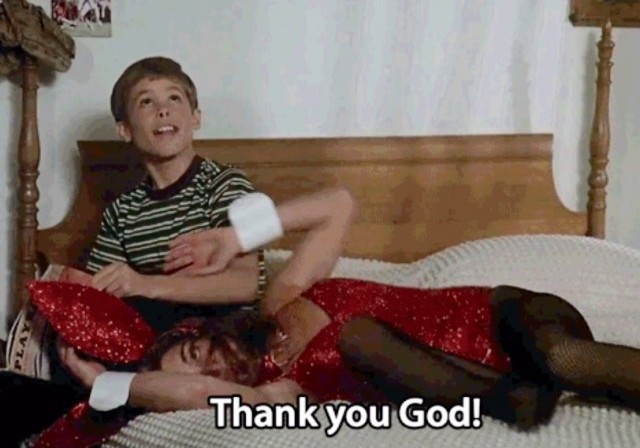 There has been speculation Joe Biden may run.

There has been speculation Elizabeth Warren may run.

Either of them individually would be a dream come true for the pure theater of it (and with Warren, for some other reasons).

But together, it will have the conservative media and blogosphere shouting “Thank You God!”

Could it be? Consider this unexpected development, first reported by CNN, Biden meets with Warren in Washington:

Vice President Joe Biden met privately with Sen. Elizabeth Warren on Saturday in his residence at the Naval Observatory, CNN has learned, another sign he is seriously deciding whether to jump into the Democratic presidential race.

The meeting between Biden and Warren, confirmed by two people familiar with the session, is the biggest indication yet that Biden is feeling out influential Democrats before announcing his intentions.

Beloved by liberal Democrats, Warren decided to sit out a campaign of her own, but she has yet to formally endorse a candidate. In an interview on Friday, she told WBZ in Boston: “I don’t think anyone has been anointed.”

The vice president arrived in Washington shortly before lunchtime, even though his official schedule said he was planning to spend the weekend at his home in Delaware.

While this may all be for Warren to stand on stage with Biden when he announces, doesn’t it make sense for them to announce the full ticket at one time in order to completely overwhelm the Hillary machine?

The progressive troops at Daily Kos already see this as THE ticket, quoting form a HuffPo column by Yale Prof. Paul Kahn:

A ticket that included Elizabeth Warren would speak directly and convincingly to both.

Progressives wanted Warren, not Sanders, to run. She has been the standard bearer for this wing of the Party for several years now. For her to win the presidency, moreover, would represent a more fundamental feminist achievement than a win by Hillary, who after all came into national politics as the spouse of a President. Warren, probably wisely, has renounced a run in 2016. Yet, a Biden campaign, cast as one of completing the work of this administration, would be understood — implicitly or explicitly — as leading to a four-year presidency. Biden will be deep into his 70s in four years, which is surely time to retire. In short, running with Biden puts Warren in the prime position to run on her own in four years. This prospect should be far more satisfying to progressives and feminists than watching a spectacle of self-destruction in the coming electoral season if Clinton and Sanders remain our choices.

A Biden/Warren ticket speaks to all the elements of the Democratic coalition. It speaks to the future, while holding on a little longer to the promise of the present. It would save the Democrats from their own worst enemies: themselves.

Having Warren on the ticket gives Dems a potential “first” if they win (you guess which “first” I’m talking about). And if Biden pledges to serve only one term, to ensure the Obama legacy, Warren eases into the top spot in 2020.

And you know what? That might actually be a strong Democratic ticket:

Biden-Warren isn't a bad ticket for the Dems. Key question: Did Obama know about this meeting ahead of time?http://t.co/MDbuIbmjP6

[For those of you who grew up in a cave, the Featured Image is from Animal House]

Wonder if her dying great great Cherokee grandfather told her to run for Veep.

Being a little papoose at the time, she probably can’t remember. But in any case, my wampum is on Trump.

You mean what wampum you have left after Chief Thief has stolen more and more of your hard earned beads and trinkets.

Yes, that’s what I meant.

Note that the scientific name of Western Atlantic hard shell clam, aka the “quahog,” from which the purple, muscle scar “wampum” was derived, is Mercenaria mercenaria, literally “money money.”

I have thought for several years that if things go bad for Hillary, And Oblamo doesn’t decide to make himself Permanent, That they would bring in Far -Left Warren. She is another Socialist with no work background or honesty.

Having Warren on the ticket gives Dems a potential “first” if they win (you guess which “first” I’m talking about).

The first VP born in a tipi?

VP in a tipi! That’s great!

First born under a buffalo chip?

Feeling out, or feeling up?

A Biden-Warren ticket “speaks to the future”????? Can the Yale prof count?

He’s 70-something, she’d be 70-something at the end of their first 4 years. I mean, I am not that far away from that milestone myself, but . . . speaks to the future? Puh-leeze.

Biden’s problem is similar to Bernie Sanders. Both are too old. And, both come from blue states. Same is true for Elizabeth Warren. A female from Massachusetts also can’t win a general election. Though what people are seeing is that Hillary’s dead meat. (Drudge has been on this case for months!)

The GOPe are now contending with Trump’s popularity! Oh, yes, this is going to be a big factor! And, Trump may not even pick a politician to be his running mate.

Trump, last night, played well in Alabama! Pundits? They may have to commit suicide.

The Democrats are ALL TOO WHITE!!!

Sanders, Warren, Biden and Obama and all the rest of the Democrats…….

Time to revisit all the Biden plagiarisms!

They’ll go down in flames.

Nonetheless, it’s fun to watch Clinton be humiliated yet again. This time for good.

This would be great with Cruz and Fiorina as the ideal ticket. Cruz would mop the floor against Biden and make his shiny dentures or veneers fall out. Carly would expose Faucahantas for the absolute fraud she is, quite fearlessly. And when it comes to Fauxcahantas trying to speak against business, Carly will again punch her out.

Fiorina is not a conservative. She and Jeb are the least conservative GOP candidates.
https://www.conservativereview.com/2016-presidential-candidates/candidates/carly-fiorina
http://www.americanthinker.com/blog/2015/08/carly_a_flawed_candidate.html

Fiorina supports:
Climate Change hoax/Carbon tax scam
Dream Act/amnesty
Common Core
The week of 9/11, she was praising Islam.
http://gatesofvienna.net/2015/08/what-did-carly-fiorina-really-say-about-islam-after-9-11/
Fiorina disparaged Ted Cruz in 2013 for trying to stop Obamacare.
While she was at HP, the company paid 6.7 million in bribes to Russia that enabled Putin to gain power and cost HP a huge 58 million dollar fine.
http://www.freerepublic.com/focus/news/3325532/posts
http://www.businessinsider.com/afp-us-judge-fines-hp-59-mn-for-bribing-russian-officials-2014-9
As a CEO, Fiorina was a disaster: http://fortune.com/2015/08/14/carly-fiorina-president-2/

After HP, Fiorina moved to Virginia where she was employed by the RNC.

Fiorina (likewise Huckabee, Perry, Santorum and others) is running at the behest of the RNC to split and dilute conservative vote to stop Cruz and Carson and deny conservative vulgarians and crazies a candidate/nominee and a voice.

Further, the RNC is probably about to deny Trump any participation in further debates unless he is willing to sign an agreement not to run as an independent. https://www.youtube.com/watch?v=tiH_NQ0PfRg

Hey, trying to “ban” Trump from a debate would be an A1, deadbang way to GUARANTEE the nomination to Trump. But I doubt the stupid party is smart enough to do that.

The most obvious reason for Biden to hold a secret meeting with Elizabeth Warren, is not the ecplanation that havee bene leaked (seeking her endorsement, asking if she would be interested in being Vice President) because it is far too early for that, and there is no reason for this.

It’s sounding her out to see if she intends to run for president or not, or was considering it if Hillary’s reputation got worse.

Biden indicated he would only do one term…setting up Warren for a 2 term extravaganza. If you a progressive Democrat who wants a woman candidate who is not Hillary, this is a perfect scenario. If I were a betting woman, I would say this announcement occurs just before the 2nd GOP debate, to take the wind out of that particular sail.

I still think the 0bama machine is going to run Michelle as its candidate, to win Barack a “third term”.