Lashes out at Rubio On Abortion: Calls Him “Very Young” 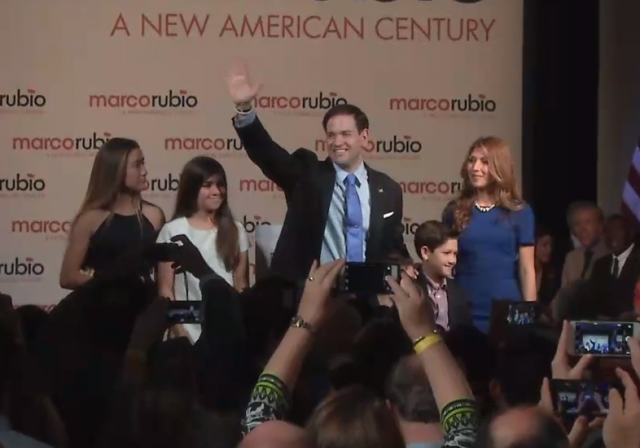 Marco Rubio recently spoke about his views on abortion, and in particular, in cases where the pregnancy resulted as a result of rape or incest:

Marco Rubio has defended his record as an opponent of abortion, against criticism arising from his statement during the first Republican presidential debate on Thursday that he had never advocated for exceptions of any kind, even if a woman’s life was in danger or when she had been raped.

“I personally and deeply believe that all human life is worthy of the protection of our laws,” the Florida senator said, in an interview broadcast on NBC on Sunday. “I believe that irrespective of the conditions in which that life was conceived or anything else.”

Hillary Clinton saw an opening and attempted to release some kind of inner Ronald Reagan in a weird way when she decided to attack Marco Rubio (not by name) for his views on abortion. However, in doing so, she thought it might be a good idea to let the country know just how much older she is than Senator Rubio:

The age difference notwithstanding, Hillary seemingly has gone all out on her support for abortion rights in light if the Planned Parenthood videos showing people from Planned Parenthood negotiating fees for body parts from aborted fetuses. Hillary had called the videos, “disturbing”:

Question: I wanted to ask you about the Planned Parenthood videos. Have you seen those?

Clinton: “I have seen pictures from them and I obviously find them disturbing. Planned Parenthood is answering questions and will continue to answer questions.

She in fact, seemed to support a congressional inquiry of there was one:

That all changed within days. The video shows her using strong language against Rubio:

Clinton added that Rubio’s abortion position “is as offensive and troubling a comment as you could hear” from a Republican presidential candidate.

Marco Rubio, was not backing down and his campaign issued a statement from the Senator:

“Hillary Clinton supports abortion even at the stage when an unborn child can feel pain; she has defended partial birth abortions as a ‘fundamental right;’ she opposes requiring parents to be notified that their minor daughter is having an abortion; she supports funding Planned Parenthood even after they have been exposed for their role in selling the organs of unborn children; and she supports using taxpayer money to pay for abortions overseas,” Rubio’s statement read.

While Hillary seems to be staking out the “war on women” position, her comments about Rubio’s age seemed rather bizarre. With millennials a big voting bloc, the idea of pointing out her 35 year age difference with Rubio will likely be a hindrance, not a positive.

When one Republican says something stupid, all get tarred. They need to take a lesson from Carly Fiorina, who answers these questions very well.

Denying women an exception when the mother’s life or health is at risk is a denial of the basic right of self-defense.

“When one Republican says something stupid, all get tarred. “

I hope you are not counting Rubio’s position on abortion as ‘something stupid’. There are some conflicts which do not allow for compromise or neutrality. The sanctity of life in the womb is one of those conflicts.

I am. Whether the life in the womb has more sanctity than the mother’s life is not a call for anyone but the mother to make.

I realize that there are abuses, but those abuses go both ways. I’m thinking of one case in which a woman with cancer was given an abortion and both ended up dying.

Not a decision for third parties to make.

Under your thesis, there is only ONE party. There are not “two” parties at all.

Providing an unborn human being status in the law would MAKE FOR two parties.

If you believe that, then you’d better hope Roe v. Wade stays intact.

There is a section in the foundation portion of the opinion, discussing the consequences of a grant of power to a secular government to intervene in a decision. Once that grant of power is made, there is no way to control the contend of the intervention.

Roe v. Wade is written so that a decision to abort a baby absolutely requires the consent of one human being. In our imperfect world, it at least denies the government the power to coerce abortions on a wholesale basis. When that opinion issued, people were aghast, and loudly declared “It can’t happen!” Later, we found out that it could, and did, happen in China.

If you think it still couldn’t happen in the US, go back and re-read some of the nasty, horrible criticism of Sarah Palin for refusing to abort her baby with Down Syndrome.

Be very careful what you wish for, when it comes to writing laws.

Rubio didn’t say what you suggest.

One of Bill’s accusers reports that he told her not to worry about getting pregnant, he had suffered from mumps as a child and was sterile. So who impregnated Hillary with Chelsea?

Bill is a one-man war on women, along with other Democratic stalwarts such at Teddy, John and Bobby Kennedy.

Female babies are aborted at a higher rate than male babies. In the human sacrifice category neither counts as a life.

It’s nice to have a transcript of Rubio’s words sandwiching Hillary’s, the point is well-taken.

I would add a clip of Rubio speaking in his own words. The reason is, I am pro-choice. I disagree with his position, and yet, I noticed his decency came through during the debate. The spoken word is powerful, and if you want to showcase these great candidates, include the video clips where possible.

The newspapers are carrying nothing but Trump and Hillary and a bit about Sanders, so these candidates will get buried if somebody does not pay them the attention they are due.

“I personally and deeply believe that all human life is worthy of the protection of our laws,” the Florida senator said, in an interview broadcast on NBC on Sunday. “I believe that irrespective of the conditions in which that life was conceived or anything else.”
—Marco Rubio

See, there’s absolutely NOTHING stupid, extreme, or anti-woman in that statement.

The “…protection of our laws” being extended to the unborn would simply mean that the law would conduct a balancing analysis as between the interests of two people when a mother’s life, or mental or physical health was plausibly found to be at risk.

That’s all. That’s it. Abortions would not be “banned”.

Rags, when “mental health” is added in here as well as an undefined, vague “physical health”, I think that clouds the issue.

No position that purports to deny women the right to decide whether they live or die on behalf of someone else will be successful. (Your right to extend your arm ends at the tip of my nose, etc.)

Why are we (meaning the Republican party) even going there with such inflammatory ideas, when the prospect of prohibiting a woman from deciding herself if she gets to live is not remotely close to being a timely issue.

I love you, brother, but you’re just as wrong as you can be.

There’s no good or bad time to consider matters of life and death, right and wrong.

It isn’t “inflammatory” to rationally deal with any such questions, despite what the crazies in the Collective would screech.

Where a mother was PLAUSIBLY threated if she were to carry a child to term, do you imagine a court would force that?

But you are TOTALLY wrong in your amazing assertion that ONLY the mother has any rights in deciding to kill her child. As, I hope on reflection, you’ll see.

By the way, there is a discussion going on over at Reddit, that is placed as women who had abortions describing their experiences.

One glaring fact popped up several times: some women said they were told they had to delay their appointment to have the procedure done “for several weeks.” Maybe that was merely a matter of capacity, and maybe something else was operating.

Given the statements in the undercover abortion videos about the desirability of more fully-developed body parts, one has to wonder if some abortions were delayed to allow the parts to develop. Also desirable would be healthy tissues unaffected by toxins, for example, crack and amphetamines.

A “several week” delay would be significant in the course of a pregnancy, and later abortions are not in the physical or mental best interests of the mother.

The key would be to look for a difference in wait times for healthy women and obvious drug addicts.

…or a threshold between microscopic and macroscopic dissections.

When talking principles, exceptions shouldn’t dominate the conversation… I get so weary of this. Let’s get principles straight.

The news is that any Republican is speaking about abortion in 2015, period. It was widely believed the issue would be largely buried and heavily muted out of a desire to never again have a War on Women theme.

I’m not trying to take sides in it. I just find it interesting things worked out like this, again, here in August 2015.

So weird, right? Like nothing’s been in the news lately…

I think it is unlikely that Roe v. Wade will ever be overturned in any of our lifetimes. Choice, with some restrictions, is the law of the land. Conservatives have been arguing almost fruitlessly for years about choice. It’s costing us votes, lots of votes. Why argue about something you can’t change? There are many other issues important to conservatives that won’t be decided our way if we lose elections because of our anti abortion stance. We would be better off during campaigns to refuse to talk about abortion. Too often on the right, opposition to abortion is a must before a candidate is given any further consideration. Why. It’s hurting us.

“Look, slavery is the law of the land. I mean, read Dred Scot, people. We’ve beat this drum for years, and all it does is cost Whigs votes. Now, too often, opposition to slavery is a must before a candidate is given further consideration. Why? It’s hurting us. Hell, it could cause a civil war or something.”

Hmmm. What happened to the Whig party? They used to win elections and everything. Then vanished like dew under a burning glass; what could have caused that?

Good thing nothing like that is going on today, isn’t it?

If it were- then some well-known, well-established Old Boys Network party might be in trouble! It might even go the way of the Whigs!

But that’s crazy talk. Who would believe that except hobbits & morons, right?

“…what could have caused that?”

You clearly don’t know. You should read up on it, because it WAS nothing like what’s going on today.

And it has nothing to do with this thread. Does it?

That is, more or less, what Jefferson said, when his efforts at abolition failed. He decided that although abolition was of the highest priority, he wasn’t going to see it in his lifetime no matter how hard he fought for it. Therefore it made no sense to keep wasting his time, effort, and talents on it when there were other, albeit less important issues where his efforts would not be fruitless. So he devoted himself to those less important issues such as the revolution and the proper governance of the USA, and hoped the next generation of abolitionists would have better luck than he did.