Council gets “Rule of Law” lesson from engaged, enraged residents. 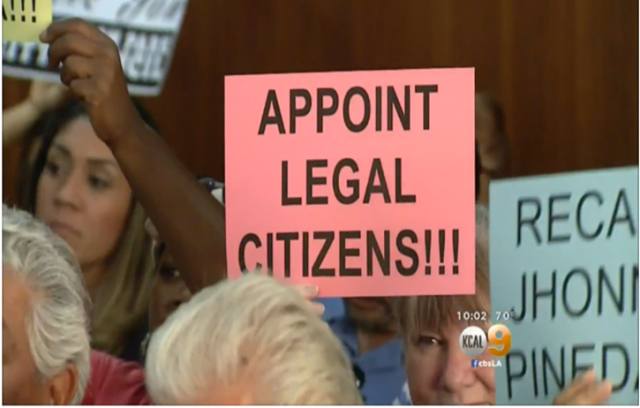 While California awaits the arrival of a “Godzilla” El Niño, a storm has already broken out in the city of Huntington Park.

We reported that two Mexican migrant leaders, both quite undocumented, have been appointed to city commissions. And video of the city council meeting in which those appointments were approved shows only a few citizens on hand to protest the measure.

That wasn’t the case for the Monday night meeting, in which approximately 200 local residents flooded the council chambers to voice their anger over the action.

The following video from that meeting offers a glimpse into city action, which follows a recap of events that lead to the citizen response:

Speakers came to podium for about 3 minutes each to express their thoughts on the legality of those appointments.

Francisco Rivera, who has lived in the Huntington Park area for 35 years, told the council that he opposes the appointments of the illegal aliens.

“How can we be a great nation when we reward people that come to this nation illegally?” Rivera said. “There’s a difference between a legal immigrant and an illegal immigrant.”

He added: “If I’m hungry and if I’m starving and if I break into somebody’s house illegally, I’m going to go to jail. But if I go and knock on somebody’s door and say, ‘Ma’am, I’m really hungry, could you please do me a favor, could you please make me a sandwich?’ That’s the proper way, to ask for something. You shouldn’t get rewarded by breaking a law.”

Rivera, who volunteers in the community cleaning up graffiti, addressed the council while still wearing his reflective vest and carrying his work gloves.

“Not every immigrant that is here, is here illegally and that’s the difference. There’s a right way to do things and a wrong way,” Rivera told the council. “It’s not fair for guys like me.”

Of course, not everyone in the chamber agreed with Rivera, and one took a swipe at the people who demanded the appointments be rescinded.

“How many offended Americans are actually ready to give their time and commit to take a role without payment,” said another woman. “That’s right, I am proud of both.”

“We want to at least provide them a voice or at least a seat at the table to give some kind of advisory,” Karina Macias, the mayor of Huntington Park, said. “They’re part of the community.”

Professor Jacobson noted that Donald Trump has rocketed to the top of the Republican-primary field by focusing on illegal immigration and border security, and his immigration control plans seem to be popular with many Americans (especially the idea of nixing birthright citizenship). This observation can be confirmed by the many Huntington Park’s residents who were singing his praises during the meeting.

In the audience, while one speaker was voicing support for the council’s decision to appoint illegal aliens to city commissions, a black member of the audience spoke out, saying, “Illegals should be deported.” Another audience member responded, saying, “Go back to Africa.”

The only counters that the city council members were able to offer is that the two appointees will undergo background checks and won’t be paid. However, as the meeting clearly shows, Americans are angry at the prospect of non-citizens, who broke the laws to get here, are in a position to enforce laws and regulations in this country.

I suspect the City Council thought these appointments would go unnoticed, and did not anticipate a lesson on the “Rule of Law” from so many engaged and enraged citizens.

It’s good to see these citizens speaking up against this outrage.

Hope they will also remember to go to the polls and vote out the idiotic city council members who approved this.

I read that it was one councilman, Johnny Pineda. Couldn’t he be impeached, or something?

As an elected official, he could be recalled, I supppose, but he’s almost certainly up for reelection next year, so it may be a waste of resources. Just make sure he’s thrown out on his ear in the upcoming election.

Was I that obvious? 🙂

Something could be anything – like a recall, impeachment, thousands of civil lawsuits…..

If it was going to generate this level of outrage, the citizens should have gotten involved then. Post-confirmation is too late.

Until we the people storm into these gov assemblies with pitch forks and torches…nothing will ever change.

In the audience, while one speaker was voicing support for the council’s decision to appoint illegal aliens to city commissions, a black member of the audience spoke out, saying, “Illegals should be deported.” Another audience member responded, saying, “Go back to Africa.” – See more at: https://legalinsurrection.com/2015/08/huntington-park-citizens-storm-city-council/#more-138921

All is proceeding as I have foreseen…

I consider the “racial healing” brought about by Obama and his regime to be one of the high points of his reign.

My favorite part about the Obama era is all the racial healing.— jon gabriel (@exjon) November 24, 2014

Glenn Reynolds retweets it every couple of weeks as a reminder 🙂

“It’s all part of the plan.”
The Joker
The Dark Knight

The people protesting are lucky that the only kind of exclusivism and discrimination considered respectable is against illegal immigrants.

If those two had been legal immigrants from Mexico, but not citizens, that is “green card” holders, they would have had nothing to say, even though the situation would largely have been the same.

By the way, as it somewhat common, these people seem to be conflating people who are not citizens with illegal immigrants. (we know they think that way, otherwise they wouldn’t think that requiring a would-be voter to present a driver’s license was any way to screen out non-citizens.)

even though the situation would largely have been the same.

Deliberately putting illegals—or, in even plainer English, criminals—into municipal office is not at all the same as putting non-criminals in the same posts.

You are very stupid.

But appointing illegals to these positions is simply another attempt to get the camel’s nose under the tent.

In the entire city, they couldn’t find citizens or legal immigrants to sit on these commissions? You already know the answer to that: they didn’t try, they WANTED to make this statement. They were inviting the camel into the tent.

So no surprise at the response.

Oh, on the driver’s license issue: illegal resident aren’t supposed to get one of those. That’s why it’s a reasonable document to request at the time of voting. It also has a photo and a signature — two more reasons to request it if one is concerned (as one should be) about vote integrity.

“on the driver’s license issue: illegal resident aren’t supposed to get one”-

Sadly, not true in CA, land of fruits and nuts. Place is swarming with illegals, I guess the Libs like it that way. 🙁

Any office paid for with taxpayer dollars or pertaining to taxpayers should be staffed only with citizens, not with green card holders. Way back when, not yet a citizen, I could not join the NYPD cuz all I had was a green card. No illegal alien or legal alien should be allowed any vote; voting is a probation of citizenship. Representation, paid or unpaid, is also a prerogative of citizenship. Boot out the fool who out these two on the city council.

“(we know they think that way, otherwise they wouldn’t think that requiring a would-be voter to present a driver’s license was any way to screen out non-citizens.)”

Until recently, this was not misguided. And people who believe this probably also believe that non-citizens should have ID or driver licenses that indicate their status, and that illegals shouldn’t have any such documentation at all (because it facilitates their criminal behavior).

Immigrants, whether legal and especially illegal, are not subject to the jurisdiction of The Constitution, other than Congressional “uniform Rule of Naturalization”, but rather to lesser laws and regulations.

That, and the enabling of second and third-world nations to export their unwanted and inconvenient clumps of cells… I mean, people, is a certain recipe for progressive corruption.

I wonder if Congress could naturalize human life conceived to American citizens from conception in order to extend human rights to the wholly innocent. The principles of reduce, reuse, and recycle [and resell] should not be applied to human life.

That makes no sense. Nobody is subject to the jurisdiction of the constitution, because it has no jurisdiction. It’s just a document; what would it even mean for it to have a jurisdiction?

Immigrants, even ones who immigrated illegally, are subject to the jurisdiction of the united states and their courts.

The Constitution is a contract established by “We the People” with two parties: “We the People” and Posterity. Its jurisdiction is established by both sovereign domain and scope (e.g. citizens). Either other parties are excluded from its jurisdiction unless explicitly included, or other parties are included in its jurisdiction unless explicitly excluded. While the Supreme Court has not ruled to establish one form or the other, it has favored the former in the past.

Of course the whole thing was done to make a point. (all people are created equal and they are members of the community and they want them to be citizens and so on like that.)

Why don’t illegals use their VOICE within THEIR OWN COUNTRY to fix things there?

We have plenty of Democrats who now disregard the rule of law. We don’t need more.

RE: “Why don’t illegals use their VOICE within THEIR OWN COUNTRY to fix things there?”

Ugh….because they have their own versions of our Democrat Party ruining their nations already?????

Comes down to two words: “Gun” and “control”.

A “Diverse” group is key to their success and Telemundo would love to film a reality series based on the Americanos.

These same politicians pay lip service to civil rights, but when it comes down to the nitty gritty, they are the same animal.They don’t give a damn what we think.

Be it a city council, county, state or federal entity, they are the ones that are violating our civil rights, by putting these people in positions that are not they are supposed to be in.

As Rush Limbaugh said today and I happen to agree with him, this is an invasion of foreign nationals to take out our way of life.

“How many offended Americans are actually ready to give their time and commit to take a role without payment,”

Oh, please. There’s a scheme working to get them freebies on the taxpayer dime.

Many view the flood of illegals as an invasion. Nothing proves the point as well as an in your face move to create what strongly smells like an occupation government.

“The only counters that the city council members were able to offer is that the two appointees will undergo background checks and won’t be paid.”

As I’ve asked oh so many times….. How does an illegal alien pass a criminal background check? I wanted to know the same thing when Obama invites groups to the White House.