Local uproar shows Californians are tired of being a “sanctuary state.” 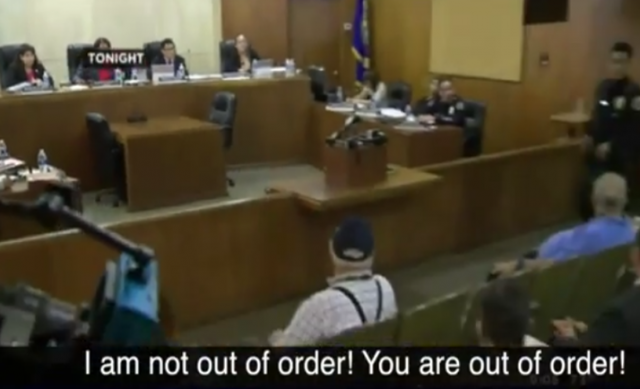 While it’s hard to believe California can get any nuttier, the city of Huntington Park has managed to set a new standard.

In addition to allowing illegal immigrants access to driver’s licenses and the state’s Obamacare exchange, now Huntington Park has given them an opportunity to actually govern legal American citizens.

Two Mexican migrant leaders have been appointed to city commissions.

Julian Zatarain always assumed the doors of City Hall were closed to him because he is here illegally, arriving from Sinaloa in 2007 when he was 13.

The 21-year-old college student found other outlets for service, such as volunteering for the Red Cross and with an organization that helps young people like him get access to educational resources.

These appointments, made by Councilman Jhonny Pineda, were achieved by getting around federal requirements for citizenship, as the young men are serving voluntarily and are not receiving any pay. However, not all Huntington Park residents are embracing the appointments.

“I don’t think it’s right,” said Rosa Maria Zambrano. “I guess in my view that you ought to be a citizen in order to represent the city well. What if they were suddenly deported or something, and they don’t do their job?”

Some residents are starting a petition drive to seek the resignation of Pineda, resident Betty Ramata said.

How did Zatarain and Medina earn these commissions? It looks like it may have been the old fashioned way — through political patronage.

Despite a public outcry at a City Council meeting this week, Pineda pressed ahead with the appointments — a first for California, he said.

During his run for office, Pineda promised voters he would create opportunities for the city’s undocumented immigrants. Some have accused him of appointing the two men because they helped his campaign.

This video report confirms that some Huntington Park citizens were furious at these appointments. In fact, the debate was very robust. Perhaps the most disturbing aspect of this clip comes when Pineda asserts he is giving illegals a “voice that they deserve.” I, like many Americans, would argue they deserve no voice in government unless they obtain full citizenship following legal means.

Given the attention that Kate Steinle’s senseless and tragic death at the hands of an illegal immigrant has recently received, including an August 5th rally for “Kate’s Law” in deep blue San Fransisco, the timing of these appointments could not have been worse and may help the petition efforts. Additionally, details are now being released about an illegal alien, accused of rape and murder in a July 24 hammer attack, who avoided deportation twice in the past 15 months.

Not surprisingly, this criminal has had a history of run-ins with the law:

Victor Aureliano Hernandez Ramirez and an accomplice, Jose Fernando Villagomez, allegedly broke into the Santa Maria home of Marilyn Pharis on the early morning of July 24. Pharis, 64, was bludgeoned with a hammer and sexually assauleted. She died eight days after the attack, prompting murder charges against Ramirez. He is being held on $1 million bond.

But Ramirez’s mere presence in the U.S. raises questions given that last month’s brutal attack wasn’t his first act of violence. Nor was it his first time in law enforcement custody. He’s been arrested several times for battery, drugs and for violating probation.

I suspect that the petition for Pineda’s resignation will be successful. Californians are beginning to tire of being a sanctuary state.

IF we had an American President, he’d have these Dreamers picked up this week and deported.

If the illegal aliens started robbing, raping, and killing people in the Sidwell Friends school, the illegal problem would be solved in 24 hours.

“But when a long train of abuses and usurpations, pursuing invariably the same Object evinces a design to reduce them under absolute Despotism, it is their right, it is their duty, to throw off such Government, and to provide new Guards for their future security. ”

We have a revolution coming, only in America, we call them elections.

Maybe next they could appoint some illegal ISIS folks to the police department.

I heard that Tyrant Obama the Liar sued the Eugene police department because they were requiring that job applicants to the department be US citizens.

“Maybe next they could appoint some illegal ISIS folks to the….” White House as President…..

The Tweets summarize it all very well. ICE should deport them publicly. Also, “These are jobs Americans won’t do?” really says it all.

Its a shame to see this kind of lawless behavior taking hold of this country.

I think the Martha’s Vineyard Commission and the Vineyard’s six towns need at least a couple of illegal immigrants on each board of selectmen. Just for sanctuary’s sake.

I would also suggest to the people of that area to start a petition for a ballot initiative to make it a requirement that all commissioners be either a citizen or a resident alien and let the people vote on it.

How about banning non-citizens from employment at all government organizations?

How about making being an illegal a felony and those that help them felons also and that includes those that set up sanctuaries and provide them with drivers licenses?

I entered this country legally.

It took me ten years to apply for a green card and citizenship. While waiting for my naturalization papers, I was given access to generous tax payer funded resources in employment, housing, education and medicine (which I never took).

Part of my immigration process entailed a medical checkup and criminal background check. I was tested on my knowledge of US history and my Constitutional rights.

My INS interviewer asked if I was a member of the Communist Party in my native country. I remembered being very impressed with the question.

Because I took it to mean the US was vigilantly screening out the political ideology that ruined and murdered my family in Vietnam. I didn’t have to worry about socialism rearing its ugly head in my adopted country.

I was never discriminated during my application process. The open border crazies + Democrats who say otherwise would rather you NOT know how generous + accommodating this country’s immigration system is compared with the rest of the world.

At my naturalization ceremony, I swore an oath to uphold the Constitution. It was a reasonable oath.

This part of the Constitution stuck with me: “The United States shall guarantee to every State in this Union a Republican Form of Government, and shall protect each of them against Invasion;…” Article IV Section 4.

So you can appreciate why I’m shocked + outraged that two illegal aliens managed to do what the British Empire, Japanese Imperial Army, Third Reich and Soviet Union could not.

There’s a reason why America remains the top destination for millions of LEGAL immigrants.

It’s time to push back against this mockery of our legal immigrant story and the bastardization of the American Dream.

I very much enjoyed your story to citizenship and welcome you to our great country. We need citizens like you to keep it strong. If you came from the ME today you would have options about what percent of a U.S. citizen you would like to be: 100% or something less.

Watch this if you want your blood pressure to go through the roof:
https://www.youtube.com/watch?t=153&v=B65pLsah3XE

Leslie, you’ve had years to fix California. What’s the deal?

Hey Henry, it takes a heck of a lot of shoveling before California falls into the Pacific!

As foreign nationals [I assume Mexican, but it could be a Central American country] they have no loyalty or allegiance to the United States, its Constitution, or its law. They are subject to the laws and jurisdiction of a foreign country. They are performing official government duties, which can be enforced by law on the citizens of Huntington Park, said requirements may not be be in accord with our law or Constitution. They will be enforced on Americans, regardless; because the State can do no wrong.

The government of Huntington Park could reasonably be considered by its residents as not being legitimate and resisted.

It’s interesting that they were APPOINTED, not ELECTED. Democrats have little use for democracy.