Welcome to the flashback sequence no one asked for: it’s time to talk about Chick-fil-A again.

The fast food chain’s reputation as a supporter of traditional marriage has drawn another series of boycott threats, this time from the Denver city council. The council is currently debating whether or not to sign a contract with the restaurant for a spot at Denver International Airport.

Councilman Paul Lopez called opposition to the chain at DIA “really, truly a moral issue on the city.”

His position comes despite ardent assurances from the concessionaires — who have operated other DIA restaurants — that strict nondiscrimination policies will include protections based on sexual orientation and gender identity.

Robin Kniech, the council’s first openly gay member, said she was most worried about a local franchise generating “corporate profits used to fund and fuel discrimination.” She was first to raise Chick-fil-A leaders’ politics during a Tuesday committee hearing.

The normally routine process of approving an airport concession deal has taken a rare political turn. The Business Development Committee on Tuesday stalled the seven-year deal with a new franchisee of the popular chain for two weeks.

Should the committee reject the lease, an individual member — if one is willing — could introduce the concession deal in the full council. Ten of the 13 members attended Tuesday’s meeting, and none rose to defend Chick-fil-A, although some didn’t weigh in.

“We can do better than this brand in Denver at our airport, in my estimation,” new member Jolon Clark said.

The city is already working with its attorneys to find legal justification for “doing better.”

Last time Chick-Fil-A made headlines, the media went into meltdown mode, pushing think pieces pitting corporate decisionmaking against the rights of LGBT individuals to live free from the pain of others’ opinions. It got to the point where we had to answer those think pieces with more think pieces defending free association specifically within the context of a chicken sandwich.

Society at large lost the ability to understand a world accommodating to opposing viewpoints.

Still, the criticism doesn’t appear to have affected the chain’s ability to do business; at least, not in the long run. Their recent tweaks to simple things like coffee brewing have made them competitive in the supersaturated morning beverage market.

Various councils have tried this sort of ban before—in Chicago, New York, and at Northeastern University—but those efforts failed to start the ripple effect of ideological boycotts that we see progressives advocating for.

In fact, there was a huge outpouring of support for Chick-fil-A. Check out Legal Insurrection readers’ Chick-fil-A photos (2012), like this one from Lee in Newport Beach, CA 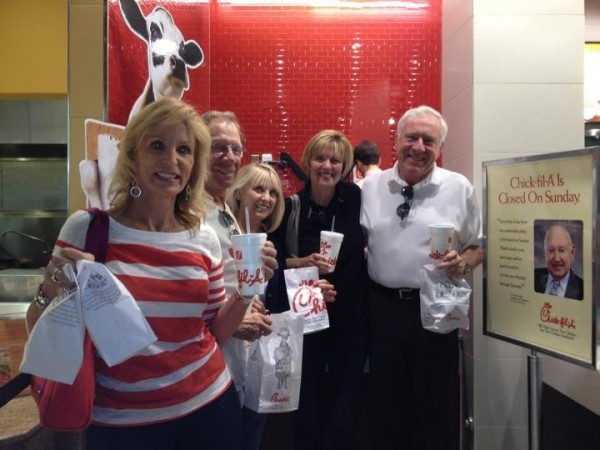 That’s the good news. The bad news is that this has nothing to do with banning a single Chick-fil-A franchise at a single airport; they’re testing the First Amendment for weaknesses and waiting for a hole to open up.

Chick-fil-A’s side of the story has been largely allowed to fade into the background along with the various rallies, protests, and kiss-ins that defined the last great wave of opposition, but that doesn’t mean it’s not important to keep running that narrative into the ground when things like this happen.

As I said, the progs on the Denver city council are testing the waters to see what will float. Let’s sink their narrative before it finds its stride.

The “Denver Council” is just a bunch of chickens cowering to their big money bag buyers.

A curse on you Denver!

You are being too forgiving of those on the council. They are leftists intent on suppressing the first amendment rights of those who disagree with their statist ideologies.

They may be cowards and probably are, but they are first and foremost anti-American and clearly fascists.

All energy should be focused on them, not dispersed at their lawyers or anyone else.

It’s always interesting to me that support FOR “traditional marriage” (the only kind) is somehow perverted into “hate and discrimination”.

But that’s how the Collective rolls…

How in the WORLD does a (now deceased) corporation founder/owner’s or corporate board’s viewpoint equate to “discrimination”?!

Are we really going to put up with this form of hate-projection?!?!

Their “rights” movement has been taken over by sociopath bullies is why Marie.

….and their silence conveys consent.

I’d love to see Ted Cruz take that on. 😉

(Of course, the left is trying (by omission, selective-editing of the conversation, misrepresenting what was said, etc.) to make this look like “little Canadian” “brave” Ellen Page was “battling” and “grilling” (pun intended, no doubt) somehow “winning” – what a FAIL on her part, and theirs!)

I linked to a great piece about Cruz doing exactly that.

The city is already working with its attorneys to find legal justification for “doing better.”

The reason that they need to work hard there is that it is so blatantly illegal what they are trying to do – 2nd order viewpoint restrictions by a state actor (bound by the Bill of Rights plus the 14th Amdt). There problem now is that whatever they come up with as an excuse will be seen as a pretextual, esp. with that quote.

GDPCLGBTAHLES
I lived in Denver in 1951-53. What a great place it was back then to be a little American.

I laughed when Chik-Fil-A opened a new restaurant in the People’s Republic of Asheville only a stone’s throw away from the new Trader Joe’s. The place is always busy. The SJWs are finding it is hard to get people angry over a spotless restaurant with amazingly helpful servers and tasty food.

Don’t those haters on the city council know that Starbucks Coffee has at least one outlet in the Denver airport, and Starbucks supports Planned Parenthood (Which isn’t about planning or parenting!). Planned Parenthood was started to purify the race by getting rid of black and brown babies. Weren’t all those abortionists White? Or at least trained in White dominated medical schools? Haters!

To be fair, Planned Parenthood has moved on. They have progressed to contract for indiscriminate killing of black, brown, yellow, white, and even green babies. It all looks the same beneath the skin, and probably equally profitable.

So once again we have some city fathers who have no qualms about discriminating against those whom they deem “discriminatory.” In other words, they can refuse to grant a concession based solely on their own prejudices, and not on other concerns such as financial considerations, health/safety issues, who greases their palms, etc.

Strange, it’s “equal” or rather equivalence that supports a pro-choice policy of selective exclusion, and yet it is people who support principled tolerance who are the hypocrites. Perhaps Denver should review who LGBT excludes from their trans equivalence movement on principle. Perhaps Denver should review who pro-choice denies equal rights (and life) on principle.

Then there is the transgender (e.g. homosexual) need to appear normal that has done more to reduce men and women to sperm and wombs, respectively, than any other movement since the sexual revolution. Women are keep “barefoot, pregnant, and in the kitchen” to create a perception of normalcy for a father, guardian, and an anonymous mother. Yeah, equivalence, which is noticeably pro-choice or selective.

So many narcissists, so little freedom.

Identity politics is not for everyone.

If it was “Chick-feel-A ” Robin would be gaga.

Seems the franchise owners get caught doing these kinds of terrible things all the time if you look for it. Oh those hateful Christians, how rude.

A Chick-Fil-A in Austin has been closed the past five months for remodeling. That sounds normal, doesn’t it?

http://www.foxnews.com/opinion/2014/01/29/chick-fil-gives-free-food-to-motorists-stranded-in-southern-snowstorm.html
Free food for stranded motorists in the southern snowstorm. How hateful of them.

This is a PC (PC really means Punitive Conformity) campaign and really about thought control.

It’s not enough for you to do business with them, you must also approve and participate in their lifestyle/behaviors, despite the evidence that warns against it – the proliferation of STDs and statistics showing the increase of violence, relational and emotional instability, violence, pelvic injuries, cancers, depression and suicides among this population group.

Always amazing to me how “intolerant” these people are. It’s either their way or no way. Doubt very seriously if Chick Fil A will ask “are you Gay?” – no one refused service that I’ve ever heard. What a bunch of morons on the Denver city council. Get rid old them!,

So the people at the Denver airport won’t get to eat Chick-fil-a, honestly I do not care. I live in New York, where the deBlasio administration and it’s lefty rubber-stamp city council is presiding over a massive expansion of the restaurant’s franchises! Soon you can ‘eat mor chikin’ in midtown, at 37th and 6th Avenue. Yay!

So the rules are: you are forced to bake gay wedding cakes but you are not allowed to make anyone a chicken sandwich.

One of the bakeries sued has stopped making Wedding cakes for anybody.

““We can do better than this brand in Denver at our airport, in my estimation,” new member Jolon Clark said.”
Not when in comes to chicken sandwiches, strips and nuggets. Not when it comes to quick, clean, friendly service.
Not when in comes to employee pay, benefits and working conditions.