He has a history. 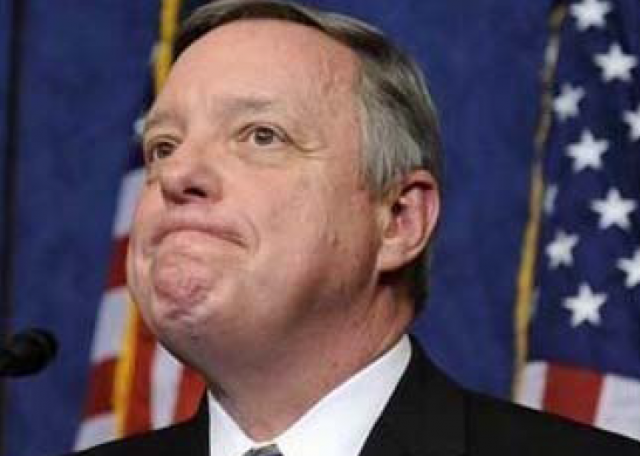 Nasty, anti-Semitic accusations of dual loyalty, or worse, lack of loyalty to the U.S. are being thrown by progressives at Chuck Schumer for coming out against the Iran nuclear deal. We will have more on that in a separate post.

Dear @SenSchumer — one decision your Party doesn't like and they call you a greedy disloyal Jew — think about that pic.twitter.com/jum4vQTZjN

Schumer is likely to lose his position as Senate Minority Leader when Harry Reid retires because of his Iran nuclear deal position:

In the absence of Schumer’s support, Obama’s go to guy keep enough Dems in line to avoid a veto override in the Senate is Dick Durbin, as HuffPo reports, Dick Durbin Becomes Lead Whip For Peace On Iran:

If the president saves his Iran deal from the critics trying to kill it in the United States Senate, it will be in large credit to one lawmaker.

Sen. Dick Durbin (D-Ill.) emerged this past week as the chief organizer, White House liaison and public cheerleader for the controversial agreement. He has organized briefings, taken his case to the airwaves and meticulously encouraged the fence-sitting senators. The administration considers him its most valuable ally in the upper chamber on the deal, while colleagues describe his work as tireless and deft….

Durbin took on this role partially out of necessity. He is the only member of the Senate Democratic leadership team who publicly backs the Iran deal, which exchanges sanction relief for curbs on Iran’s nuclear program.

Durbin is the perfect character for the job. He will say anything, like when he accused a Republican in a closed door meeting of saying he couldn’t stand to look at Obama, something even the White House denied:

In a Facebook posting over the weekend, Democratic Senator Dick Durbin of Illinois alleged that a top House Republican leader told President Obama, “I cannot even stand to look at you,” during a negotiation meeting over the government shutdown, according to a report last night in The Hill.  The claim drew sharp denials from Republican leadership and the White House….

Durbin also played the race card on Republicans during the Loretta Lynch nomination, accusing Republicans of demanding Lynch “sit in the back of the bus”:

Amy noted at the time:

“Unfairness” again. Was it “unfair” when Democrats voted against Janice Rogers-Brown, an African American judge whose nomination Durbin filibustered in 2003 and 2005? She was confirmed after waiting almost 700 days. Or when he tried to block Miguel Estrada’s nomination? Or when he voted against Condoleeza Rice during her Secretary of State nomination ordeal?

Durbin even defended Democrats taking “God” out of the Democratic platform, in an incredibly thin-skinned interview in which he attacked an argument the interviewer wasn’t even making:

Durbin joined Harry Reid in opposing the Iraq surge, which worked in stabilizing Iraq until Obama threw it all away:

Durbin advanced the unusual constitutional theory the Obama could “borrow” the power to act where the House refused to do so on immigration:

At a May Day Rally in 2013, Durbin typically became hostile and combatitive when questioned why he was attending a rally with Communists, changing the subject to whether the Communists had the constitutional right to rally:

In other words, Durbin in the perfect guy to whip votes to secure the Iranian nuke deal.

Well, Durbin or whomever, one red Democrat traitor is pretty much like another. Obama, Durbin…so what.

Dick “Turban” Durbin is a Collectivist first, last, and always.

Never an American in any normative sense of the term.

Barracula is showing his stripes, and he’s been a skunk always.

What a d…Durbin….that traitor is…..

Schumer is just pretending to be against this treaty. Democrats have a long history of voting against the progressive fascists cause when they know their vote is irrelevant. Chucky made sure that his vote wasn’t required to ensure that this treaty was approved so he could pretend to be against it.

The real problem is the Senate and the RHINOs leading it who are helping Tyrant Obama the Liar and the progressive fascist cause. They could easily stop this agreement by declaring it to be a treaty and holding a vote on ratification. Instead they chose to betray our country, help the progressive fascists and like Obama’s boots.

What, specifically, are you talking about? I’m asking in a friendly–Not challenging–way. I may not be up–date.

Dicky Durbin is a POS. So’s Chuck-U Schumer UNLESS he urges other Dems to vote with him. But, “RHINOS”..?? What’chu talkin’ about?

Durbin claims Schumer’s loyalty is to Israel. Then surely Durbin’s must be with Iran.

This is why he is called DICK, rather than Richard or Richard Joseph.

He’s enough to give Durbins a dirty name.

Now Dick “sack of” Durbin is digging in his heels.

This “Friend of Humanity” safeguards himself with bloviating, scapegoating and straw-man posturing-basically, with a Harry Reid veneer.

About two weeks ago I posted this same link:

Durban is an asshole. Unfortunately, he’s one of my senators.

We will see if Schumer is sincere or just posturing for his Jewish donors by whether he lobbies other Democrats to oppose. He is influential enough to bring some votes if he wants to. If the final tally is one or two short of an override, he’s faking it.

BUT Schumer is nothing if not an ambitious schemer, and is fully aware that Obama is not loyal at all, you are out with him on the first strike. So he’s taken that into account.

Remember, the leadership election will be as Obama is becoming a private citizen. His power to exact revenge will be ended. How many Democrats will remain his toadies when he cannot hurt them?