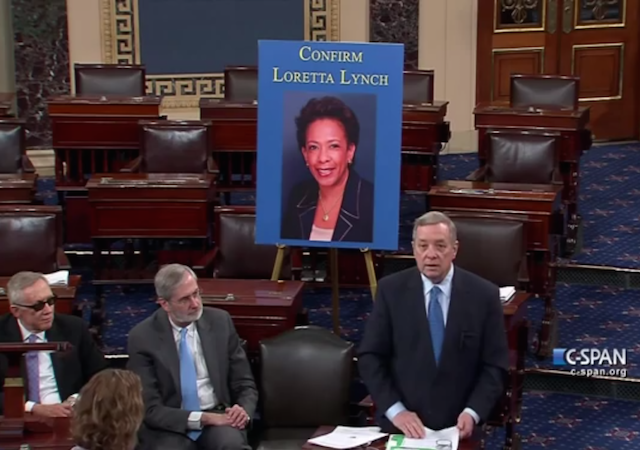 Durbin took to the floor of the Senate today to lash out against Republican Majority Leader Mitch McConnell over the delayed confirmation vote for Attorney General candidate Loretta Lynch. Republicans are blocking the vote until two more Democrats sign on to passage of the Justice for Victims of Trafficking Act; Democrats were scared off the bill earlier this month by accusations from liberal special interests that it expands “anti-choice” regulations under the Hyde Amendment.

So, Democrats balked, Republicans dug in their heels, and now Durbin is on the floor of the Senate invoking the shades of segregation. Vintage him:

Fact is, there is no substantive reason to stop this nomination. But the Republican majority leader announced over the weekend that he was going to hold this nomination…until the bill….passes, whenever that may be.

And so, Loretta Lynch, the first African-American woman nominated to be Attorney General, is asked to sit in the back of the bus when it comes to the Senate calendar. That is unfair. It’s unjust. It’s beneath the decorum and dignity of the United States Senate. This woman deserves fairness. She seeks to lead the Department of Justice, and the United States senate should be just in its treatment of her nomination.

To think that we would jeopardize her opportunity to serve this nation, and to make history, is fundamentally unfair.

He wants unfair? We can show him unfair. Earlier, House Republicans put together a nice infographic showing how unfair modern human slavery can be:

Human flesh is a billion dollar industry; cartels are importing and exporting people, and men, women, and children are being sexually assaulted in exchange for cash—and Lynch having to wait for her nomination vote is unfair.

Being in the minority may just make Democrats jump the shark when it comes to playing the race card, because this is getting ridiculous.

Meanwhile, Senate leadership is signaling that Lynch’s nomination isn’t the only one on hold:

You go ahead and keep rolling with that “unfairness” narrative, Dick. Those 20 million slaves can wait their turn, right?

Harry Ried ignore senate bills to protect the President = patriotic. McConnel expects the senate to work on important business prior to a confirmation seat that isn’t empty = racist? Really “Little” dick Durban. (HT to Levin for the little moniker).

Her confirmation should not be “held up”; it should be rejected, without regard to her ethnicity. In testimony she said she had no problems with more gun control and thought Obama’s law-by-fiat was not a violation of the Constitution.

Her race isn’t a problem, but her politics are. We don’t need to replace Mr. Holder with a female Holder clone.

I agree. For that reason, I think that tying it to the trafficking bill is stupid.

Not really. If the GOP’ers have the stones to outright reject Lynch’s nomination, then delaying her confirmation pending the JVTA’s passage is the only way to get it passed.

Once they reject her, they have no leverage with which to pressure the Dems to pass JVTA.

Now, as to whether the GOP’ers have the stones is another issue….

Lynch is MORE dangerous than Holder. He’s so damaged, he has managed to make himself a liability even in this ObamaBanana Republic.

We need a REAL AG, not another Obamic enabler.

I can’t remember the name, but didn’t Bill Clinton nominate an African-American woman before being forced to go to his third option, Janet Reno?

The two withdrawn for AG by Clinton before Reno were Zoe Baird and Kimba Wood, both of whom had to withdraw because of illegally hired, and/or non-SS-taxes-paid-on, nannies.

“To Senate Democrat Dick Durbin, they’re one in the same.”

I think the English idiom is: ” To Senate Democrat Dick Durbin, they’re one and the same.”

I find dick durbin’s comments so offensive that this, all by itself, should stop her nomination.

Sadly, it is tired, but predictable. And patently false.

I often wonder if they only people nominated are people of color for that very reason………… O.o

The Democrats, once again, are standing in the gap FOR SLAVERY (currently euphemistically called “human trafficking”) and not a PEEP in the press about it.

War on women. Racism, too – since nearly all of those being sold in this (mostly) sex-slave trade are NOT white.

(wish there was a way to edit w/o moving to Disqus…..)

The best way to describe Senator Durbin is that he is nothing but a Dick!

People like “Little” Dick Turban are the reason why most Americans hate Congress. Turban needs to be forcefully retired. He definitely won’t do it on his own. He will be there until they pack him out feet first.

Durbin is the Illinois contribution to the White Privilege Combine, a Sharpton subsidiary.

As an Illinoisan Dick Durbin does NOT represent my interests or the best interests of this state.

The late, great Don Wade, from the big 89, would refer to Senator Dick Durbin as the “sack of Durbin”.

WLS 890 AM. Listened all the time to Don and Roma.
Bruce Wolf and Dan Proft later carried on the term Dick “sack of” Durbin.
But now all four are out of WLS.

Durbin is also known for his equating the US Military in Iraq and Afghanistan during the George W Bush Presidency as the same as the Nazis, the Khmer Rouge, the forces of Pol Pot. That mouth of Durbins is famous for Durban’s allowing it to run over uncontrolled.

It is as amazing to realize what sick, America-hating bastards have become elected to high office in our nation as it is to realize the extent to which the GOP has capitulated to them.

Senator Dick “sack of” Durbin voted against Condi Rice’s confirmation for Secretary of State. Is the bus seating political and not racist? Or, is Dick Durbin a racist according to his own definition?

Loretta Lynch may be a legal luminary but she would be politically enslaved to Obama and therefore beholden to compromise justice (as Holder did) to make ‘living Constitution’ end runs. No way should she be confirmed.