Lack of transparency in Chinese response 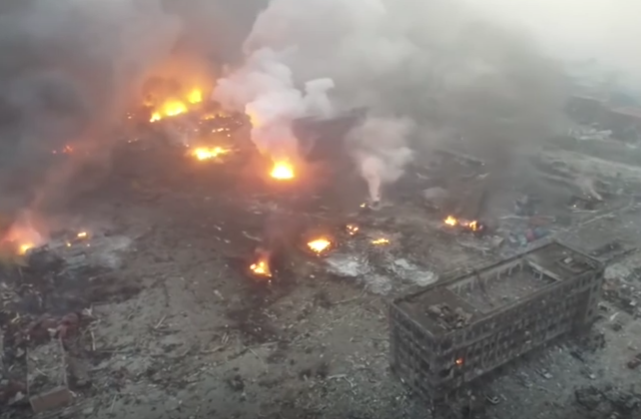 While the EPA is dealing with the fallout from the Animas River spill that it created, China is responding to a chemical catastrophe of its own:

Fires shot plumes of black smoke into the sky Saturday at the site of a chemical warehouse in Tianjin, China, where explosions earlier this week killed at least 105 people.

But officials denied news reports that an evacuation order had been issued for everyone within 1.8 miles (3 kilometers), with Tianjin government spokesman Gong Jiansheng calling the reports “false information.”

The Beijing News, citing Armed Police, had reported the evacuation order. CNN has reported that at least one disaster recovery shelter is located within the reported evacuation zone.

However, photographs made it appear that vehicles in a parking lot had caught fire rather than new explosions having taken place at the warehouse, as the Xinhua news agency had reported.

The Chinese have ordered an evacuation radius of nearly 2 miles due to the presence of numerous toxic chemicals and irritating vapors. Drone footage of the port area where the detonation took place is now available, and the extent of the damage is breathtaking.

The Chinese government initial response seemed on par with the EPA’s actions in the wake of the Animas River spill, in terms of completely minimizing the risks in order to allay the public’s well-placed fears. However, that was before the anti-chemical warfare troops have entered the site.

The People’s Daily newspaper tweeted that they had been sent to handle highly toxic sodium cyanide which had been found there.

The discovery was confirmed by police “roughly east of the blast site” in an industrial zone, state-run Beijing News said.

Officials had until then only confirmed the presence of calcium carbide, potassium nitrate and sodium nitrate. Calcium carbide reacts with water to create the highly explosive acetylene.

Officials have so far insisted that air and water quality levels are safe.

The only thing the Chinese officials have not tried yet is drinking the water.

My step-daughter, Michelle Eastman, works in Beijing at a firm creating the English version of Chinese publications. I asked her for more details on the situation, and she notes that events like this are likelier to occur because of the recent economic downturn.

[T] government here is being rather selective about the information it releases. From what I’ve heard, people living nearby the affected area have been getting very little guidance about how to protect themselves from the contamination. Unfortunately, events like this are only going to get more common in China. Economic growth is starting to slow, so people are going to start cutting corners to lower costs. In a system with little to no independent oversight and regulation, that’s a recipe for disaster.

The following video, China Uncensored, gives a Jon Stewart-like look a exactly what the approved Chinese press is offering.

In other words, it looks like we did export something to China: Our elite journalism standards.

On a more serious side, what exactly did happen? While it is too early to say, based on my experiences as a chemical safety professional, I suspect something similar to Henderson, NV’s famous PEPCON explosion in 1988. Essentially, a small spark ignited some material. The flames grew too quickly for the workers to handle, so they evacuated. The flames ignited drums of flammable material, increasing the fire’s intensity, which then caused nearby tanks to detonate. In the end, the fire and subsequent explosions claimed two lives, injured 372 people, and caused an estimated US$100 million of damage.

My prayers are going to the good people of Tianjin, in hopes they got the help they need to recover fully.

The simple fact of the matter is that China is a Republican paradise – no regulations, only the 1% matter to the government; everyone else is disposable.

Your point is valid only if you consider it was Republican Richard Nixon who established the EPA. 😀

Granted. I should have said that China is a *conservative* paradise where only the BSD 1%er MBA CEO Managers matter, and the rest of the people are only resources to be screwed and shafted.

Which would have been ANOTHER of your stupid lies.

How’s that “regulation” working out on the Animas River, ya moron…???

Regulation only gives people the illusion that they are being protected, while costing them hugely in both treasure and freedom. And the further away from them that regulation is centered, the less apt it is to do any good. At ALL.

The Animas River, the spill *caused* by the 1%er BSD MBA CEO Managers who abandoned the toxic materials?

Yeah, sure, blame that spill on the people who were trying to clean up the mess left *BY THE CAPITALIST MANAGERIAL THIEVES WHO ABANDONED THEIR WASTE*.

Raggy, the typical “screw you, I got mine!” BSD 1%er MBA CEO Manager kneepad-wearer.

You don’t know what you’re slobbering about here, do you, you poor stupid, lying Collectivist bastard?

What the actual fark is a “BSD 1%er MBA CEO Manager”?

“Big swinging what ChemFool don’t got”.

Apparently his mother was frightened by someone with an MBA.

What a fool and tool you are. Communist China is the same as all communist countries. The 1% you speak of are the party members in good standing.

Yeah, because conservatives are SO into Communism. Fucking moron.

You don’t have a clue about how China works, do you? It’s obvious.

Correction: that’s how the central planning is working out. Great reminder from L.I. regarding the censorship. Free speech looks messy and unsettling until compared to a massive explosion and a plume of toxic smoke.

Wrong. *Capitalism* looks like a massive explosion and a plume of toxic smoke and censorism.

Riiiiight. That would be the force that’s lifted BILLIONS of people out of poverty world-wide, and gave us the internet, a free-press, and the means people needed to even FLUCKING read after dark.

East Germany, West Germany. Which one looked “like a massive explosion and a plume of toxic smoke and censorism.”

There is it, campers. You can all go to bed now. You’ll not read anything more retarded on the Internet this day. Maybe this week.

Oh, man. That step daughter is in for it now that she has been identified as the source of info that goes contrary to the party line.