Hail to the chief. 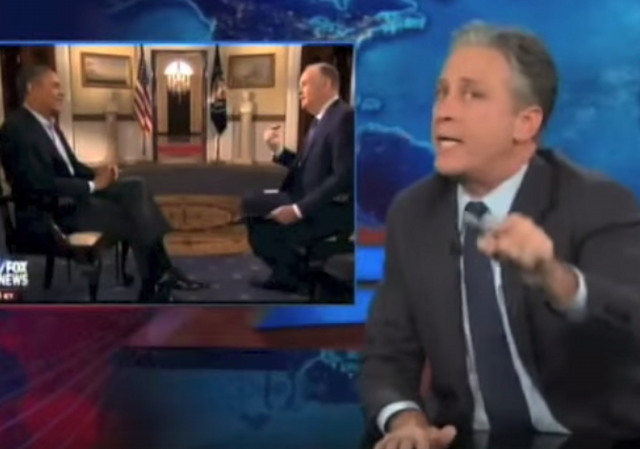 The last time I wrote about Jon Stewart, I noted that his last show was the same night as the first Republican debate and that I looked forward to seeing a ratings comparison for that night. In case you haven’t heard, the debate won and it wasn’t even close.

In one of his final performances, Stewart mocked FOX News for suggesting he was very cozy with the Obama administration and said they couldn’t offer proof.

Stewart challenged that the Fox hosts had not produced any video evidence of such devotion and played his own montage of Fox showing “even Stewart” going after the White House for various failings over the previous six years. Boom! Got ’em!

Of course, that was precisely the point: Stewart was such a Democratic boot-licker that when even the Obama administration had messed up enough to merit his ridicule, it was newsworthy.

Stewart’s version of events wouldn’t really tell the story of the show, so I took his challenge, going back and digging out just a few clips (from the past two years! that told a much more accurate story of The Daily Show and why it merited fond farewell tweets from both the White House and the Democratic Congressional Campaign Committee, not to mention countless left-wing journalists and politicians who loved it for shredding conservatives with a guffawing, adoring studio audience shrieking with delight at every Stewart quip and stare.

Here’s the reel Rutz put together:

What is the left going to do without Jon Stewart?

Twitter favorite Stephen Miller speculates in a new column at The Wilderness:

End Of Days: Jon Stewart Walks Away When The Left Needs Him the Most

Of course, web pundits and networks did their best to maintain a semblance of snark about it all, but come Monday there will be a great unfilled void in viral news sites. Social media content writers everywhere will stare hopelessly at their screens, questioning the very meaning of their existence. Why? Because Jon Stewart isn’t around anymore to provide for them or guide them. Just as the 2016 news cycle has reached Peak Trump, and Peak Absurd, the political Left in the media has lost their best tool and biggest weapon.

And they only have themselves to blame.

The thing that’s widely misunderstood about Stewart on both sides of the political aisle is the notion that he somehow thinks he belongs in the arena he is pigeonholed into, both by the Right and especially by the Left. Stewart is the affable smartass in the back of the classroom shooting spit wads at the teacher for attention. But, just like in high school, this sort of act only works if that kid remains an outcast (or at least an outsider) instead of becoming Prom King. The minute all the cool kids want to be seen around him, or start mimicking his behavior, the act dries up and becomes stale, and even moreso if that kid starts hanging around the principal as a means of validation.

Gee, I didn’t know they were both Trans…..

Wasn’t the Daily Show motto, “When news breaks, we make it up”?

Great Scott, damned deserter. Stewart left when his forces were under fire, in the most intense siege in years. Court Martial him and then hang’im with his own videos. ./ end snark 😉

Oh, it’ll fun when the Dems circular firing squad springs into action, even when done ever so quietly.

Totally agree with the sentiment, but look around… it’s been going on for awhile now and it’s only going to get more intense as the election approaches. In fact, I think it will continue until we see a full pendulum swing back towards conservatism at a societal level. The level of full-blown stupidity we’ve had for the past 6+ years simply cannot continue.

I will bet that money – a contract dispute for more – was an underlying, unpublicized factor in his leaving.

He didn’t do what he did just for the ideological mojo — he is in it for the money.

Capitalism, and personal gain…….bet it’s in there, unspoken, as a reason he left…… Heck, he may even have a gig working for Obama with a MUCH bigger paycheck ahead.

Time will tell and the truth will out.