Obamacare To Be Opened Up To Illegal Immigrants In California

Obamacare To Be Opened Up To Illegal Immigrants In California 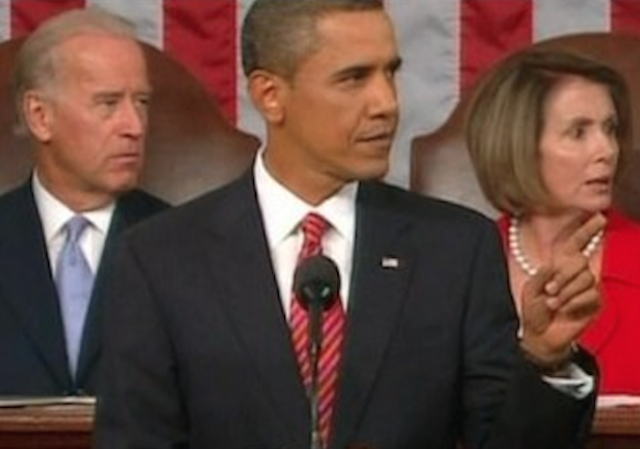 When President Obama was pushing Obamacare, he stated  before a joint session of Congress in September 2009 that it would not be opened up to illegal immigrants.

Remember what happened next? Representative Joe Wilson yelled, “You lie!” and it caused quite a stir.

Wilson may have violated the rules of decorum, but was he wrong? It has taken some time, but President Obama may owe Wilson an apology. From Forbes:

State Senator Richard Lara has already moved a bill through the California State Senate that would allow illegal immigrants to buy unsubsidized health insurance in the state’s Obamacare exchange. The state would have to receive a federal waiver from the Obama administration before implementing it.

The bill would also extend coverage to illegal residents under the age of 19 to enroll in California’s fully paid-for Medicaid program.

The Pew Research Center has estimated that there are 2.5 million illegal immigrants in California.

And consider this. Passage of SB 4 could be a real boon to the business of health care delivery in California. California’s impressive medical system could be the leader in international medical tourism.

SB 4 would also make it clear that a foreign person could land at LAX, give Covered California a call and sign up for an almost full pay Platinum plan for a few hundred dollars a month, on the first of the following month when their coverage became effective show up at Cedars-Sinai Medical Center and have thousands of dollars of treatment, get back on the plane and go home, and then drop the coverage.

SB 4 doesn’t have any requirements for how long a person has to be in the country to enjoy these benefits. All SB 4 says is, “No individual in California should be excluded from obtaining coverage through the California Health Benefit Exchange by reason of immigration status.”

This is pretty remarkable.

How many promises has President Obama made about his signature healthcare plan that have turned out not to be true?

The list can go on. This article from Heritage is nearly 2 years old but details 10 broken promises at the time.

Does ANYBODY believe Pres. ScamWOW?

Unfortunately yes. 47% of the great unwashed believe that Congress is made up of Old, White Slaveholders.

It has taken some time, but President Obama may owe Wilson an apology.

Thanks, Jay. I always like to start off the morning with a good laugh.

Wow, do I get to pay for them too? Thanks Roberts! Wish I had a say in the matter. Well I tried my best, I, along with 70% of my fellow citizens, called our Senators and Representatives over and over and over, we crashed their switch boards many times. We wrote them, begged them, but no one gave a damn. And on Christmas eve they illegally snuck it into law. And then a poser upheld it – twice.

Isn’t this Taxation Without Representation?

I smell something Revolutionary coming!

We get the government we’re too lazy and indifferent to oppose.

I don’t recall Obama having contradicted Wilson or acknowledging the peon’s existence. The people who should apologize are those who view his reaction as an overt act of racism, the literal equal of cross burning and wearing a silly-looking white hood. They won’t, of course, because being right is not a defense.

Tax rate more like 500% – they’re in the same sinking “Titantic” that Chicago is in.

“Technically”, ObamaCare can be offered to illegals by State law, not the federally mandated ACA.

There is not ONE THING that this man said about ObamaCare that was NOT a lie.

The question, as always is – how can we REPEAL EVERY WORD of it, and solve the problems of Americans going broke because of huge medical bills, losing insurance because of unemployment, not being covered for “pre-existing conditions” when those are the very things we NEED insurance to cover in the first place, to get bureaucrats AND insurance companies out from between patient and doctor? And, of course, the MASSIVE costs to our system because of all the illegals getting medical coverage, which have been a major factor in driving up costs in the first place (not to mention the need for tort reform)!!

The ObamaCare debacle is worse than a train wreck – it will DESTROY our nation.

Who will REPEAL EVERY WORD OF IT and propose solutions – and push to have them made law, to solve the REAL problems that did – and still do – exist related to high health care costs and open markets, all of which Obama promised (and lied EVERY STINKING TIME) to solve……but of course FAILED to address in any way?!?!

So far, the only POTUS candidate I’ve heard address this is Ted Cruz. More Conservative Congress members also need to be put in office, and RINO establishment types (and ALL Democrats) need to GO!

So sick of the Low Info. Voter (LIV) who is propping up this nightmare…….and the MSM who keeps the soap opera going, distracting the masses with “bread and circuses”……..

“President Obama may owe Wilson an apology.” May? May? The optative? Drams and wishes unlikely to be realized.

What, you mean to tell me that President Obama lied about the fact that Illegal Aliens were going to be eventually allowed to purchase coverage on the exchanges?

Anyone with even a passing knowledge of how the PPACA was structured knew that eventually a State was going to try to make it available to that State’s illegal immigrants, on the concept of “well, it’s not FAIR that they can’t get subsidies. They live here TOO, don’t they?”

1. Obama only just learned about this in the news.

What’s the problem with anybody buying unsubsidized < health insurance?

For most people it’s overpriced. I’m not sure why anyone would even want it.

There may something else connected with it.

Medical tourism? It would have to be very carefully planned.

There has to be some kind of establishment of residency before. And usually a person can only buy during the enrollment period.

Perhaps some doctors could arrange that. For this to be worth doing, it would almost certainly have to be life-saving or life-altering, like separating Siamese twins. Otherwise it could be done elsewhere.

Medical tourism goes the other way,m and the purpose is to save money.

SB 4 doesn’t have any requirements for how long a person has to be in the country to enjoy these benefits. All SB 4 says is, “No individual in California should be excluded from obtaining coverage through the California Health Benefit Exchange by reason of immigration status.”

Are you kidding? There is already an entire medical tourism industry created by foreigners who exploit the 1986 EMTALA — the federal law which requires hospitals to treat anyone who shows up in a U.S. ER, regardless of citizenship status or ability to pay. And this has been going on for decades (even Marco Rubio complained about the cost of it to taxpayers in Florida a few years ago). It’s why south Texas hospitals are jammed full of Mexicans and central American pregnant women, who come into the U.S. shortly before their due date, so they can have their “anchor babies” in our hospitals, and we taxpayers can pick up the hospital tab.