The state anticipates handing out 1.4 million over the next 3 years. 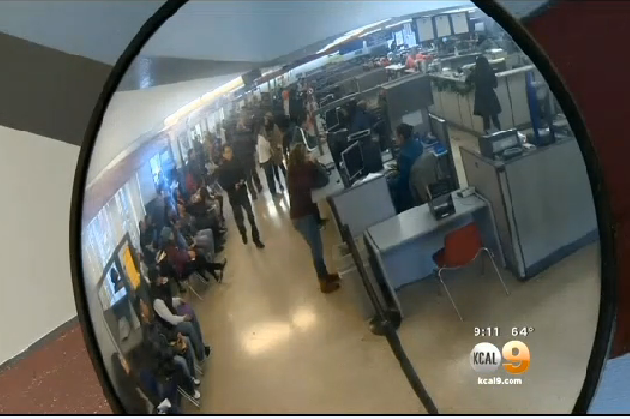 The last time we checked on California’s new rules for issuing driver’s licenses to undocumented immigrants, the Department of Motor Vehicles was so overwhelmed with requests for new licenses that it can take up to three months to get an appointment…even for lawful citizens.

The new program has been so popular that now over 110,000 illegal immigrants now hold those vital pieces of identification.

California has handed out 110,000 driver’s licenses to immigrants in the country illegally during the first seven weeks of applications.

The figures for all of January and much of February were released this week by the state’s Department of Motor Vehicles.

In early January when the law took effect, hundreds of immigrants lined up at designated DMV offices for walk-in appointments.

The applicants have to submit documents and take a written test, and later, they must take a road test. They receive licenses that read “not acceptable for official federal purposes” like boarding planes.

Let’s take a look at the written test requirements for a moment. I remember studying diligently for several hours before taking my exam several years ago, and being very nervous about getting the correct answers. It is difficult to believe so many immigrants who have not had basic educational opportunities either here or in their native land would pass the exam.

In fact, 80% of those in the nation’s capital failed.

Four out of five illegal immigrants seeking driver’s licenses under a new D.C. law have failed a written knowledge test — a rocky start to a program that in its first two months has issued 268 licenses, according to city officials.

The failure rate of 80 percent compares with a 58 percent failure rate for people seeking traditional driver’s licenses, the Department of Motor Vehicles told a D.C. Council committee. In addition, a check of the DMV website this week shows a massive backlog in appointments required to apply for the District’s “limited-purpose license.” The first available date for an illegal immigrant to get an appointment is in March, and more than 6,000 appointments are pending.

Reports from Nevada indicate a 90% failure rate. This is troubling, indeed, from a safety perspective. The following information has been reported about car accident statistics as they relate to illegal immigrants.

For a detailed report on what is happening on the roads and highways of the East Coast see the article Harvest of death on the Eastern Shore where it is reported that while 5% of the population in the area is Hispanic they are involved in 25% of the fatal traffic accidents, an astounding 5 times as much participation as representation. Given the fact that most members of the Hispanic community are law abiding and responsible citizens, that means that a large percentage of the illegal alien portion of the Hispanic community is even worse. How much worse nobody knows because nobody is tracking it.

A review of State Police auto accident reports for 2002 through 2004 for that area of the Eastern Shore also revealed that of the 179 accidents involving Hispanic laborers:

I will be very interested in analyzing California’s car accident numbers at the end of next year.

The report  from the DMV indicates  that within the next 3 years, 1.4 million immigrants will have California licenses — regardless of immigration status.

So, in addition to jeopardizing our personal safety, amnesty is endangering the safeguards in our voting system…the fine print on those new licenses notwithstanding.

Someone needs to put on the CA ballot a prop that fast tracks lawsuits against the state for allowing uninsured drivers access to the roads.

Making the state shoulder the burden for these accidents will quickly make them change their tune.

Ha-ha! Good one. Nearly all propositions here pass, no matter how ridiculous. Of course, the way you phrased it, it would fail, but this could be easily sugarcoated into something that has to do with organic chickens, and — voila! voted in.

My God. No wonder I left my home state 9-yrs ago. The insanity simply balloons on Demo-Steroids.

Simply mind numbing. You couldn’t make it up. Not certain how auto insurance companies can/will handle this but If I were one I’d exit the state. We’ll see what happens the first time a Hollywood “personality” or CA VIP suffers a serious loss, injury, or death at the hands of one of these licensed operators.

Suffering from coast envy, our pols will probably have it here in NY within a year.

Wait. The regular failure rate is 58%?!? The DL test was one of the simplest, and most common sense based tests I’ve ever taken in my life. Only a few of the more obscure questions really should be missed by anyone.

The fortunate part is they don’t get the driving portion if they flunk the written test. Otherwise, driving examiners would have a high rate of heart attacks from fear.

It obvious that the tests need to be rewritten so more applicants are able to pass.

Anybody doubt that that’s coming?

Clearly it’s raaaaaacist and xenophobic to have a licensing test that so many illegal aliens fail. We have an obligation to make it easier for law-breaking foreigners to obtain driving (and other) privileges in our country, no matter how many Americans get killed in the process.

as a San Diego (lifetime) driver, I KNOW the majority of these people will not follow through with paying the high insurance rates. Neither will my “Uninsured Driver” rates lower. Lose-Lose

There’s a simple solution for illegals with a driver’s license and no insurance….the state provides them with free insurance.

let’s see how hit and run stats change (the purported goal) vs how many illegals are registered to vote, which is the real goal

Doesn’t have to be hit and runs…illegals can die or become gravely injured in accidents just like the rest of us.

With their new found fake card of confidence, I wouldn’t be surprised if they become more reckless.

How long before every other state bans reciprocity with CA?

“jeopardizing our personal safety, amnesty is endangering the safeguards in our voting system”

Then it’s working exactly as intended.

Maybe California also has an 80-90% failure rate. Maybe those 110,000 are the 10-20% who passed? I would not be surprised if there were many more illegals than the government estimates.

Coming soon to a location near you: “Driver’s licenses issued by the following state(s) are not considered valid identification: California…”

With any common sense.

Next step is to abolish the “racist” testing. Way to go California!

Where are these ‘driver’s getting insurance?

Enough already … bring on CWII … I hope it’s coming sooner rather than later.

I just left California for Connecticut and I recall that if I dropped insurance from a car, the insurance carrier let the dmv know and the dmv suspends the registration. Also, the car I took a license test in had to have proof of insurance or else you could not take the road test (when my son got his DL, I had to give him proof of insurance in order to get a permit and take the test). I hope CA isn’t turning a blind eye to the insurance requirements, I’ve seen many stories of illegals scamming drivers with accidents ugh. Glad I left CA

I just left CT for GA … I feel sorry for you. I really do.

The obvious solution is for red states to pass laws NOT to recognize California drivers licenses as being valid. Not sure if it can be done but that would be a start.

So I assume the euphemism “undocumented immigrant” is retired now? It’s hard to call someone with a legally-issued government ID “undocumented”.