“I’m not going to be bullied for saying #AllLivesMatter” 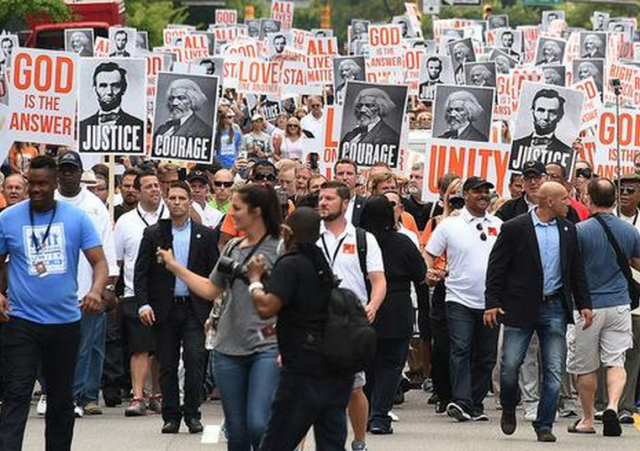 This weekend, Glenn Beck is leading his annual “Restoring” rally.  This year’s focus is “Restoring Unity,” and to that end, he organized an #AllLivesMatter march in Birmingham, Alabama.

“It’s about taking our church out in the streets,” Beck said. He said marchers came from as far away as China, Dubai and the Netherlands.

Actor Chuck Norris, a conservative activist known for his martial arts, action movies and TV show “Walker, Texas Ranger,” marched about two rows behind Beck. Alveda King, a niece of civil rights activist the Rev. Martin Luther King Jr., marched in the front row. Bishop Jim Lowe, pastor of the predominantly black Guiding Light Church in Birmingham, co-organized the march with Beck and marched with him at the front. As a child, Lowe attended Sixteenth Street Baptist Church, where the march started, a headquarters church for the civil rights movement in Birmingham. Lowe and his sisters were in the church when a KKK bomb blew up the church and killed four little girls on Sept. 15, 1963.

Some Birmingham police officers said the crowd could have been as large as 25,000 to 30,000. It may have been the largest march in Birmingham since the civil rights marches of 1963.

Join me along w/Glenn Beck & others in Birmingham AL on 8/28-29/15. #NeverAgainIsNow #AllLivesMatter Get tickets @ http://t.co/NXFavFZ7tW

This is our sad reality. #AllLivesMatter pic.twitter.com/eMQqcr2oSu

Watch this beautiful and stirring song about the fact that all lives matter:

Yes, beautiful. Never again is now, I get it. All lives matter, I get it. Islamic baseball hats? Lost me on that one. Obviously I am missing something.

Are you talking about the black caps with the orange “U” shape?

Those aren’t Islamic. That is the Arabic symbol for “Christian.” Muslims sometimes paint that symbol on Christian houses so they can be targeted. The hats show solidarity with those persecuted Christians.

Thanks for the education! I spent a while trying to find out. I knew there had to be a good explanation.

The Nuun ن doesn’t translate exactly to a follower of the Christian faith. A Christian in Arabic is called مسيحي (Massihi) – similar to the word Messiah (religious term). The Nuun ن is a symbol for نصاري (Nasari) from Nazareth, similar to the Nazarenes (geographical term for where Christians live or from).

This march was very much needed and will be needed again and again in many cities and in many forums.

A protest march needs to happen around the SPLC headquarters, a march just like the one around the city of Jericho. March until the “Hate Map” comes tumbling down.

Last Sat. Aug. 22nd many of us in Aurora, Illinois marched along the main street protesting across from a Planned Parenthood Compound. Sadly, I did not see one news camera crew there even though hundreds of protestors with signs were quietly presenting their disgust of the inhumanity of abortion and the selling of a baby’s body parts.

Hate is tele-promulgated by Progressives. Peaceful protests for them are an annoyance to be put up with. No more.

I am sure that this event will be viewed as racist and sexist and homophobic and anti Ilegal alien, etc. because it does not fit the twisted liberal ideology.

natdj: the fact is this event may not be viewed by very many outside conservative circles. Beck did this several years ago in DC and attracted almost 100,000 (or over) – crickets. Jon Stewart and Colbert had a rally shortly afterwards with a much smaller crowd and it was shown 24/7. That’s just how it works.

In fact, I would go one step further. When the lazy liberal media ask a Republican candidate about their favorite bible verse that candidate should say, “Did you ask Hillary Clinton to comment on the racist organization Planned Parenthood. If you have not, get lost.”

So why, exactly, has the MSM chosen not to cover this? What a stupid question! Anything that makes conservatives look good must be ignored. Anything that promotes our cause must be ignored. That means we simply have to work harder so that they will find us harder (and more costly) to ignore. Turn out for PP protests, turn out for Unity marches, turn out when good candidates come to speak.

For some notes and pics of the Planned Parenthood protest in Colorado Springs: http://www.unshackledaction.com/#!about2/c1j2k

For notes and pics of the Ben Carson rally: http://www.unshackledaction.com/#!carson-rally/c1oar

For far too long, I sat on my rear end and expected others to do all the work.

I’ve linked to info on this Unity march at my church small group’s website ( http://www.unshackledaction.com/#!current-events/cukw ). Before linking, I asked our group (some 24 of us) if anyone besides my wife and I had heard about this march. Nada, zilch, not a soul. I’ve checked a lot of news sites – nothing.

“That means we simply have to work harder so that they will find us harder (and more costly) to ignore.”

I respectfully disagree. The MSM is assigned the task of selling the narrative. They are not about reporting the “news.” The MSM is noting more than a tool of the left. Think Pravda. The MSM will even use the same terminology at times. Last week, they all said that Trump was not a “flash in the pan.” The Central Committee control is obvious. They are slowly being seen as irrelevant, however, by the great work of LI, Breitbart, and others. They will not change because they have a mission — sell the narrative.

The Minnesota State Fair is an integral factor of life in Minnesota. it connects the urban residents in the Twin Cities with the remainder of the state. I grew up only a stone’s throw from the fairgrounds. I was bemused that #FactsDontMatter had targeted the Minnesota State Fair. Lots of luck with that.

The fairgrounds are in St.Paul. Interestingly, the one case cited by these agitators happened in St. Paul. It is ironic because the St. Paul PD was racially and ethnically diversified ages before it was a political issue to hire minorities in law enforcement.

A high school friend back in the 70s was related by marriage to a remarkable family of Mexican Americans who already had a multi-generational relationship with the St. Paul PD. Her brother-in-law, his father, an uncle and a couple of cousins were all St, Paul cops back in the 70s. Today, nephews and her niece have added to the family’s law enforcement legacy.

Glenn promotes some good causes. It is good to see the Conservative side being shown.