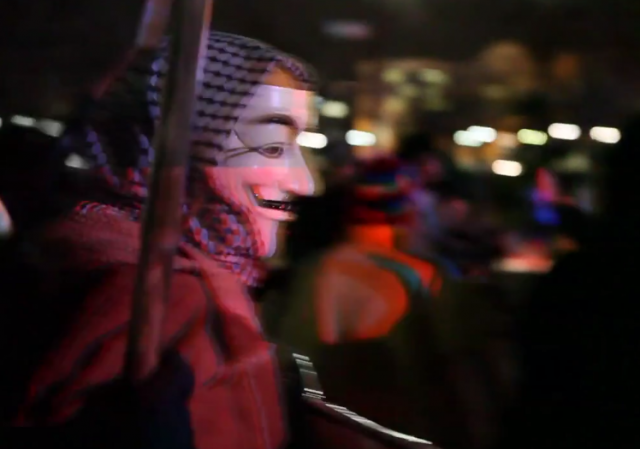 The failure of the Occupy movement was epic in its crash-and-burn in the wake of “occupiers” pooping on cop cars, establishing rape safety tents, displaying food privilege, and being infested with rats and disease.  As amusing as the “up and down twinkles” and mindless, robotic repetition of speakers were, the failure of the Occupy movement is worth revisiting in light of its offshoot the #BlackLivesMatter movement.

One of the reasons the left was so incensed by the TEA Party, and worried enough to come after us by any means necessary, is that we are a genuine grassroots, populist movement.  While they publicly railed against our successes and worked to ridicule and bully us into submission, they were always working away at trying to duplicate (i.e. manufacture) our efforts.

Occupy is still touted as “populist,” an astonishing claim that is easily refuted in that it was a clearly top-down movement funded and organized by the usual suspects.  Likewise, we know that Ferguson was another crisis the left couldn’t let go to waste, so the usual suspects hired and bused in race agitators, union members, communists, anarchists, et al.   These are all the same big players in the background, pulling the strings, and they have one goal in mind, a goal that Andrew Breitbart saw for what it was:

As described by Michael Levitin at the Atlantic, “nearly four years after the precipitous rise of Occupy Wall Street, the movement so many thought had disappeared has instead splintered and regrown into a variety of focused causes. Income inequality is the crisis du jour—a problem that all 2016 presidential candidates must grapple with because they can no longer afford not to.”

While Levitin’s listing of Occupy “successes” may be a bit over-stated, his point about the splintering and shifting to numerous causes outside the umbrella of a movement that Americans came to find genuinely disgusting, lawless, and objectionable is valid.

Occupy became so justifiably distasteful to middle America that I can’t help but marvel as the same people make the same mistakes.  Granted, some of the initial problems have been addressed by the splintering: the Occupiers-turned-#BlackLivesMatter group, for example, has a cause that is clear to its followers and a leadership that is visible and vocal.

The trailer for the film produced by Citizens United and directed by Stephen K. Bannon. “Occupy Unmasked” goes deep into the “Occupy” movement and exposes its origins as well as the radical ideas behind “income inequality” that was the centerpiece of the Obama re-election effort:

The problem for the Occupy / #BlackLivesMatter movement, however, is that their seeming inclination to violence, bullying, and other unsavory tactics are still present.

As I’ve noted previously, the violence and rioting doesn’t help their cause at all, and in fact, has the opposite affect, making Americans more conservative than before.

Writing at Hot Air, Jazz Shaw ponders how the #BlackLivesMatter movement may end up sinking the Democrats.  He relates that in an interview, a former Black Panther member said that “At some point, these young people, the Black Lives Matter movement, will have to something more than lay down in the street. Spectacle, believe me, is only a start.”

Taken in isolation, one might raise an eyebrow at this statement and wonder what this former Black Panter member could possibly mean by moving beyond “spectacle”; however, we don’t experience the world in a vacuum.  Instead, we remember various Black Panther incidents in recent years such as the voter intimidation case, the call to kill white babies, and one of many separate calls to kill all white people.  When the leader of the New Black Panthers has famously stated that America can choose change in the 2012 election by the ballot or the bullet, we don’t have much doubt about their intentions.

If Occupy went down for being filthy and lawless, what do Democrats imagine will become of a movement that seems to be actively calling for bloodshed?  As Shaw points out, it’s not the conservatives that Democrats need to worry about moving away—we already distance ourselves from anything less than #AllLivesMatter—it’s the independents, Democrats, and progressives who are not only not plugged into the political scene but who are, at heart, not inclined to see the streets of their country run with the blood of anyone, including that of people who look just like them.

When the speaker says that White Lives Matter and All Lives Matter and the crowd screams in protest about how horrible that is, the conservative crowd is going to turn ugly. They’re fine with equality, but they don’t want it turning into some sort of reverse entitlement society. But that’s okay… you’re not hunting for their votes. Instead you need to look at the progressive crowd. They’ve stopped chanting. Wait. What? Our lives don’t matter? Aren’t we all in this together? We’re supposed to be on the same team here.

You can try to start in on the long explanation . . . but as the old saying goes, if you’re spending all your time explaining you’ve already lost the argument. And then, when they see the subject shift to the former Black Panther who is talking about “spectacle” being only the beginning and young black people having “to do more than just lay down in the streets” you’ve got a serious problem on your hands. They’re not only no longer chanting… they’re slowly edging away from you and wondering if the folks in the eye rolling crowd [i.e. conservatives] have any room on their bus.

At the end of the day, American voters simply don’t like mean people, so no matter how much effort is put into restructuring and redeploying their social justice warriors, progressives bent on sowing violence and discord are likely to fail.  Again.

[Some changes were made shortly after publication related to embedded videos.]

Interrupting rush hour traffic for your protests is seldom the way to recruit the masses to your cause.

The Tea Party WAS a broad-based grassroots movement which even attracted Democrats in the early days. Public approval for the basic revolt against bailouts and debt was at 60% in late 2009.

Unfortunately, much of the movement was co-opted by activists looking to enrich themselves and expand their own influence, and various bogus “tea party” groups sprung up purporting to speak for the movement. Freedom Works, TPP, TPX, TPA, etc. – and not one of them spent any more than 5% of the donations they solicited on advertising for issues or candidates.

In the meantime, any halfwit idiot who declared himself a “tea party candidate” was instantly deemed worthy of support by certain self-styled “leaders” who proved as short of sight they are loud of mouth. Many winnable races were blundered away by stupidity, much traceable to poor vetting of candidates.

Instead of addressing the vetting issue, which would have entailed accepting responsibility for mistakes, some decided to blame the leadership of the GOP (the only party which welcomed TP candidates at all).

As a result, public approval of the movement dwindled. The reaction of those who caused that was to redouble their anger at the GOP, apparently for not following poor judgment. Today identifying oneself as a “tea party candidate” is down to about neutral effect in GOP primaries, and a net negative in general elections in most of the country.

Freedom Works, TPP, TPX, TPA, etc. – and not one of them spent any more than 5% of the donations they solicited on advertising for issues or candidates.

I agree that a lot of those Tea Party PACs that popped up were basically scams (same with many military/veterans “non-profits” that pop up around the place), but FreedomWorks was a little better than the Tea Party Patriots, the Tea Party Express, and others of that ilk. While those ones really did spend 5% or less of their money directly on election-related activity, FreedomWorks at least spent closer to half.

The original Tea Party movement was a true grassroots movement, with no “central command” or “central committee”, which is I think one reason it attracted so many people. That’s kind of what being a true grass-roots organization is about. Unfortunately, nature abhors a vacuum, and various groups of people with varying degrees of commitment to true Tea Party ideals (not to mention varying degrees of moral rectitude) took advantage of that. Still I don’t think that reflects on those of us with true Tea Party ideals as much as it proves that scamsters gonna scam. Just as the fact that there are always a number of military/veteran “charity” scams going around shouldn’t reflect poorly on those who really do support the military and veterans communities.

Tea party candidates were attacked by the GOP from the very beginning. They rightfully saw it as an attack on the GOP, which would rather field a thousand Boehners than support one Cruz. And we see the results today with that craven bunch of establishment republicans who will fight tooth and nail against any voter who demands accountability from them while refusing to fight Obama and the progressives.

The GOP needs to get a clue. We don’t want them to be our mommy and daddy, patting us on the head and sending us out to generate more tax revenue while they take care of the “adult” business of running the country.

There are moderates and even conservatives who shared some of #OccupyWallStreet’s supposed basic tenets, such as being increasingly concerned about crony capitalism, but #OccupyWallStreet was just so extreme and nasty that they alienated any supporters they might have drawn from those realms had they been a little less polarizing and, let’s face it, downright scary.

Likewise, there are moderates and even conservatives who are growing increasingly concerned with the militarization of our police forces, their seeming disdain for the rights of the citizens they’re meant to be serving, and their apparent lack of accountability (*coughWACOcough*).
I mean, when police SWAT teams in America get away with doing things even American soldiers in Iraq weren’t allowed to do…

But like #OccupyWallStreet, #BlackLivesMatter is just too extreme, too polarizing, too nasty, and yes, too downright scary, to draw any kind of popular support from these quarters.

tl;dr: Leftists spoil everything, even basically sound ideas, with their ugliness. They can’t help it. It’s who they are. It’s what they do.

The occupy movement wasn’t against crony capitalism, otherwise they would have been protesting in DC. It was against all capitalism.

What happened with Occupy, is that somebody – or the narrative – decided that what that was really about was high student loan debt (because that was what, presumbably, personally concerned most of the people protesting, and otherwise this was about nothing, except, maybe, the right to camp out in central business districts, an interesting cause in itself, but not one with long term interest.)

Every since then, it’s been a big issue, which nobody does much about, although Bernie Sanders is proposing to make all college tuition free.

#BlackLivesMatters are threatening to “shut down” the GOP convention in Cleveland next year:

should make for Chicago ’68 rerun. Can you say “Backlash”?

“”As I’ve noted previously, the violence and rioting doesn’t help their cause at all, and in fact, has the opposite affect, making Americans more conservative than before.”

And I believe BLM has been designed that way. George Soros is funding them and certainly isn’t looking to help blacks.

My guess, is that he is creating an environment where whites and Asians (and even Latinos) will cease to believe that blacks have any credibility. Then, when the obsolete black worker–who is already at 35% unemployment–ends up completely shut out of the economy (and it’s coming, there will be very few to respond to his desperation.