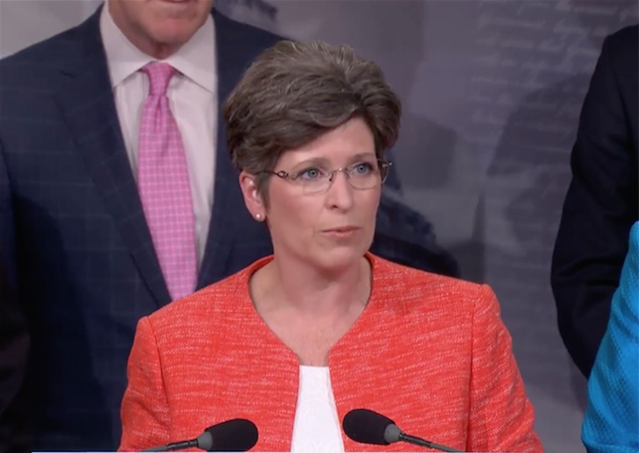 This week, the Center for Medical Progress (CMP) released it’s third video documenting Planned Parenthood’s participation in baby part harvesting. If you watch the video (you must watch the video,) be warned—it’s nauseating. I don’t give these kinds of warnings lightly.

When CMP first launched its campaign against Planned Parenthood, conservatives in the Senate came together to draft legislation defunding Planned Parenthood and its affiliates. The team, headed up by Sen. Joni Ernst (R-IA), today introduced S.1881, which includes three main objectives:

In a press conference announcing the bill, sponsor Joni Ernst spoke out against PPFA’s harvesting-for-profit scheme, saying, “As a mother and grandmother, I find this footage of Planned Parenthood’s role in the harvesting of the organs of unborn babies morally reprehensible and vile… The American people are horrified by these videos as well. Simply put, this legislation ensures that funding for women’s health is protected and that taxpayer dollars will not go to Planned Parenthood.”

You can watch that press conference here:

Majority Leader Mitch McConnell confirmed today that Ernst’s efforts will get a vote before August recess.

Republican presidential candidate Rand Paul (R-KY) was instrumental in the push to get this bill an early vote. From Real Clear Politics:

It means I must be doing something right when the socialists and left-wingers and the mayor of New York is going after me.

But, you know, I’m horrified by these videos, and everybody is. When I think of ultrasound, I think of the pictures of my kids before they were born and the happiness we had. To imagine that doctors are using ultrasound to manipulate the body around, turn the body around to take body parts from a baby, it just — it sickens me.

And so I’ve been fighting to defund Planned Parenthood, I don’t think they should get any taxpayer dollars. And we got good news today, we are going to get a vote on this. The Senate will vote on defunding Planned Parenthood before we leave in August.

Paul also makes the point that, although many senators (especially in the Democratic caucus) are pro-choice, the scope and tragedy of what has been displayed in these undercover videos could cause some Democrats to cross the aisle and vote for defunding.

I think he’s right. This specific issue has nothing to do whatsoever with a woman’s right to choose. These are barbarous acts completely separate from the barbarous act of abortion; efforts to equate the defunding of a private organization that may very well be in violation of federal law with the destruction of a court-created right to terminate a pregnancy will serve as a distraction, but in this case, I don’t think that those efforts will be able to derail the messaging behind this bill.

Co-sponsors of Senate bill 1881 include:

When asked his thoughts about conservative efforts to defund PPFA, Minority Leader Harry Reid had this to say:

“Good luck,” Senate Minority Leader Harry Reid, D-Nev., said of the uphill Republican drive to garner the 60 of 100 Senate votes they will need to cut off Planned Parenthood’s money. “We’re dealing with the health of American women, and they’re dealing with some right-wing crazy.”

Unfortunately for Reid, this could be the slice of “right wing crazy” that finally ends PPFA’s assault on the right to life.

We’ll keep you updated on the bill’s progress.

This one has legs. And to quote ZZ Top…she knows how to use them.

We need to make sure Planned Parenthood is tied permanently around the Democrat Party and Obama’s neck for the next several decades. The Democrats own this evil.

Where were you when Ted Cruz proposed his amendment?! Standing with McConnell?!?!?!

Too little too late.

As Sen. Rand Paul said, this WILL happen.

No thanks to you (and the others who stayed silent when Cruz stood up to this feckless, lying leadership that aligns with Dirty Harry Reid), it will have to WAIT UNTIL FALL.

All those babies aborted in the meantime….the blood from their deaths is on YOUR HANDS, and of all those who didn’t stand up and get Cruz’s amendment added and passed to DEFUND PLANNED PARENTHOOD last Sunday!!

I supported you; I believed you’d stand strong against McConnell (as you said…..or were those empty promises in those ads?!). Show you have a spine and STAND FOR CONSERVATIVES. Or you will be a 1 term Senator.

I’m getting tired of the argument that anyone who wants to defund “Planned Parenthood” wants to deny women their “right” to basic health care.

“You want to defund Planned Parenthood? So I guess you’ll be happy when millions of low-income women die of BREAST CANCER, then! And you’ll offer to support all the UNWANTED BABIES they’ll be forced to have! Huh? HUH?”

We’re already funding Obamacare, AKA “the Affordable Care Act,” which was billed as delivering, um, “Affordable” “Care” to everyone.

It includes all screenings for free, one free “well woman” check up per year, and all the free birth control pills you can eat.

Why, then, do we need to additionally fund “Planned Parenthood” at all? To defend this organization is a tacit acceptance that Obamacare is a train wreck which has failed one of the primary cohorts it was so enthusiastically billed as serving.

That’s how the local NBC news anchor reads what I assume is national news scripted for the locals. Two doctors so far, haggling over the price of parts dissected for the purpose of sale. But the MSM always sanitizes or ignores the ugly atheist/Marxist reality of the left. And for some reason they included a clip of Walker in some parade, I guess because he is linked to the “crazy right” for his 20 weeks thing.

Good to have crazy Harry out there calling baby parts for profit a “crazy right wing” thing. Should be nine more videos at least, and I bet they don’t get any better.

I thought that one of the biggest selling points to Obamacare was that women would only now have access to health care. We don’t NEED Planned Parenthood any more now that we have 0care.

Quite so. Planned Parenthood supporters must be pointed out as being Obamacare deniers.

OK, McConnell says he will allow a vote on this before the recess. First, McConnell lies, and in fact has lied about allowing a vote on a PP defunding amendment within the last week.

Second, If he allows a vote, how many safe (R) Senators will he send over to vote with the Democrats?

Third, there is the matter of Boehner in the House. I can’t see Boehner allowing Federal money to stop flowing to a Democrat interest group.

I appreciate the efforts of those sponsoring the bill. And I note that supposed “conservative” Senator Cory Gardner who ran on a “fight back” platform and has since voted parallel with our other Senator, Democrat Michael Bennet on everything; is not there.

But the enemies of our country, regardless of party designation, are not done fighting.

Next we see a “Black Lives Matter” riot, we should counter with “Tell that to Margaret Sanger’s Planned Eugenics!”

I’m surprised that Blacks aren’t shaking down Planned Parenthood to get their cut of the profits.

This looks too much like a Bill of Attainder.

Maybe something subtracting triple the amount any institution gets for handling baby body parts? Maybe also subtracting any money they charge for abortions?

This is a budget item, which can be changed or deleted at any time.

And is any of that “research” federally funded?

Planned Parenthood is an international corporation that offers its abortion services globally. Here’s why:

While population control does not need to take place through indiscriminate abortion (e.g. selective-child or one-child), it is a reliable and final solution to improve quality of life through reducing the problem set.

Meanwhile, pro-choice cultists are mourning the indiscriminate killing of Cecil. The lion. Not the baby.

I have a concern with the subtitle to this article, “Fund Women’s Health, not Planned Parenthood”.

Where is it denoted in the Constitution that this is a Federal role? Have we slipped so far that we no longer question these kinds of statements? Entitlement spending is clearly out of control, and it needs to stop.

Personal Liberty lives alongside Personal Responsibility. Women and Men should fund their own health. This is not a role for government.

Are women generally sicker than men?

Hoo-boy. Now you did it.