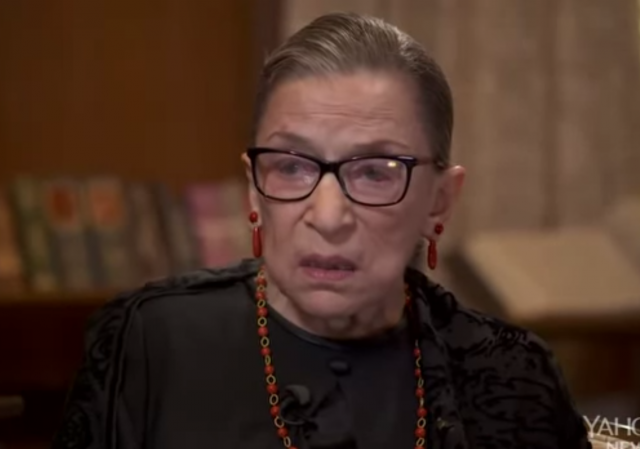 Conservatives had a tough go ’round at the Supreme Court this term. Obamacare, gay marriage, and questionable disparate impact analyses were all propped up by a divided court, causing prominent pundits to question the state of the Court, the wisdom of lifetime appointments, and the intentions of Republican-appointed Anthony Kennedy.

The Court, for all its successes and failings, serves as both beacon and barometer for the general population. While lawyers pour over briefs and opinions, and argue about pendulums, most people swallow up on-site media reports and adjust their attitudes according to which justice said what. Mainstream SCOTUS watching, then, has become less of an intellectual exercise, and more of an exercise in pop culture fandom—which has had more of an effect on the Court than you would think.

During a recent interview with NPR, liberal justice Ruth Bader Ginsburg offered some insight into the Court’s left wing, and described how her colleagues maximize the impact of their opinions—even when they find themselves in the minority, as they did in the landmark Bush v. Gore.

The time pressure in the [Bush v. Gore] case was excruciating, with the court issuing an opinion just a day after oral arguments, and, as Ginsburg put it, the four liberal members of the court “were unable to get together and write one opinion.” Indeed, each wrote a separate dissent, resulting in such confusion that, as she pointed out, some early press accounts erroneously reported that the decision was 7-2, not as it in fact was, 5-4.

After that experience, “we agreed,” said Ginsburg, that “when we are in that situation again, let’s be in one opinion.” It’s important, she added, because the public and the lower courts need to know what the court has done or not done. And neither lawyers nor judges will stick with opinions that go on and on.

“If you want to make sure you’re read, you do it together, and you do it short,” she said. Otherwise people will neither read you nor understand what you are saying.

Everything she’s saying here is true. From a messaging standpoint, a united front comes across much stronger (and louder) than does a united front also carrying various alternate explanations for why the agreed-upon result is correct.

Conservatives may not like the results coming down from the bench, but you have to admit—their tactics worked.

So why does Ginsburg think that her conservative colleagues were so verbose, or as she put it, “Why each of the [conservative] prime dogs found it necessary to do his own thing?”

Ginsburg just smiled enigmatically, saying, “Next term I think you’ll see some of my colleagues will be more disciplined.”

I’m not going to sit here and question the insider musings of a Supreme Court justice, but what I will say is that I don’t believe the conservative justices—especially Scalia and Thomas, who definitely took their own tack this session—were undisciplined so much as they were asserting particular methods of interpretation that opinions written by Kennedy, et al. left in the dust.

In the opinion, Ginsburg mentioned in particular the barrage that Kennedy endured following the release of the Obergefell opinion, saying that he largely let the opinion speak for itself. This was an easy choice for Kennedy to make, because gay marriage (at least in terms of mainstream coverage) won both at the Supreme Court, and in the Court of public opinion. He wasn’t forced to defend his opinion (because the loudest Americans liked it) or how he came to its conclusions (because people, by and large, do not care what the law really says.)

Forming a united front may have been easier for Scalia and the other members of the Court’s conservative wing, but it would have meant abdicating the role those justices were actually selected to play. The liberals’ tactic of presenting an easily digestible message—as opposed to a correct, nuanced one—may work in terms of public relations, but it may be the One Thing that truly signals the end of the Court as we know it.

You can read Legal Insurrection’s coverage of the Supreme Court here.

Herding the weak lights of the Collectivist wing of the Court ain’t no big trick for old-line kommissars like Ginsberg.

She does not promote discipline. She rules by fear. . She is a bad tempered ideologue who will make it highly unpleasant for all those around her if she doesn’t get her own way. I once began to work as staff for group the same month that Ginsburg’s term with the board was ending. I never met her but the uniform opinion of all the staff and most of her fellow members was the woman is an unpleasant rhymes with witch who loves to intimidate people.

I can’t imagine she has improved with age.

I’m convinced that Roberts (and who knows who else) was “blackmailed” by the White House. It’s the “Chicago way.”

“If law is no more than power, no more than five votes supported by doctrines of convenience, why should we obey?”

In other words, Madam Justice, you admit, just as you breathe, that the justices of the left wing of the Court are individually incapable of independent thought. Groupthink is your bible. The constitution is an heirloom. But it’s YOUR heirloom, or so you think, and you’ll bastardize it all you like, right?

Ginsburg is saying that class diversity is a source of weakness. By rejecting class diversity, the Left is capable of ignoring reconciliation of diametrically conflicting positions (e.g. make abortion, not love; selective exclusion; etc.). A house divided and all that.

From the conservative wing, the opinions have been generally thoughtful, closely-reasoned explanations about how the law under review comports with the Constitution. I’m not saying they were flawless decisions, but at least there was some solid reasoning behind them. This is what we’ve come to expect from Scalia and Thomas, and Alito is doing quite well too; Roberts, well, the jury is still out.

From the liberal wing, we get nothing of that quality. The gay marriage rationale was just an intellectual embarrassment; in comparison, the old “emanations of penumbras” seemed downright scientific. So what’s going on? Kagan and Sotomayor I consider useless, vacuous drones with no business there at all. But Kennedy and Ginsburg are hardly idiots; they should be able to give us something with more substance. Of course, Ginsburg was always pretty closed-minded, and now that her brain is fossilizing she’s getting worse. But she should still be able to give some sort of rationale, even a silly one, for her judicial decisions. She certainly used to—she made a fetish of making sure that the world knew about her cranky thought processes. Now that she’s relying on Kennedy’s decisions, I suspect that her condition is even worse than it looks.

The huge conceptual difference between the Court and other basically arbitrary authorities—legislatures, kings, bureaucracies, and (nowadays) Democratic presidents—is that the Court explains its reasoning. The tough part is that those reasons really should make some sort of sense, even if only of a weird sort. And the Liberal decisions don’t.

1. Look at the horrible human being (Ginsburg)
2. No one is going to forge diddly-squat with Roberts, who is a trembling moron
3. It doesn’t matter anyway. These people will flat-out lie to get appointed and then do what their Libtard masters demand.

Decide where you want to go and then figure out how to get there.

These people should have been travel agents, not judges.

Or as Sandra Day O’Connor used her vote; count off 4 others. And, agree with them. Of course, only if she could write the opinion. And, in one year she took both sides. Got to write both opinions. While, at the same time stiffing the Chief, who was Rehnquist.

Today, nobody refers to any of Sandra Day O’Connor’s written opinions. Though she did invent the “fork.” There wasn’t a single argument she made that didn’t involve “forks.”