The state of the Supreme Court is not sound

The state of the Supreme Court is not sound 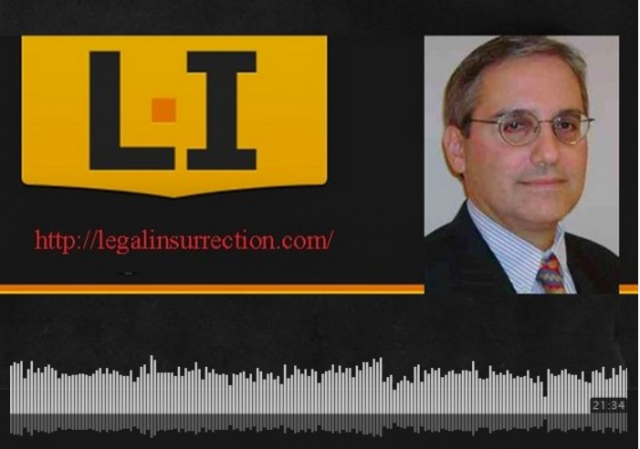 On June 30, 2015, I appeared on the Joe Thomas Show on WCHV in Charlottesville, VA, to talk about the state of the Supreme Court, and the two recent blockbuster decisions in gay marriage and Obamacare.

We touched on the rulings, the reaction, and proposals to put limits on the Court, such as judicial-retention elections suggested by Ted Cruz, and proposals for term limits.

The article I reference during the interview is from Roll Call, Reagan Aides Foresaw Kennedy Gay-Rights Views That Conservatives Now Lament.

Bottom line: We have reached the point of absurdity when the nation waits anxiously to find out how one person — the swing vote on the court — will vote on issues that decide the course of the nation.

“Think how absurd it is for a nation to be waiting by the radio, or the TV, or nowadays the internet, how is the Supreme Court going to decide an issue as fundamental as the issue of marriage, and everybody knew it would come down to one vote. So we’re waiting on one person to decide the future of our country, and whether you like it or not, if you like the decision, what if it had gone the other way by one vote, how would you feel? So I think we really do have a situation where so many things are decided by a single vote in the Supreme Court that we really have to wonder if that’s how we want to run our lives as a nation.”

Society no longer is governed by “one person, one vote,” but by one person’s vote.

This is no way to run a country.

Here’s the audio below:

There’s a long commercial break in the middle, so when the break starts you can jump ahead to the 16:30 mark when my segment resumes.

Well it’s time for term limits. This is how we keep the rest of the government in check.

Term limits have nothing to do with it. It is the quality and philosophy of judges appointed. We have found that 30-40% of those appointed by Republican Presidents end up disappointing us to some degree, while those put on the bench by Democrats tend to vote quite predictably. Changing the faces won’t change that at all.

When new constitutional “rights” are discovered perhaps they should be ignored until ratified by the states as with any amendment.

And time to require 6 out of 9 judges agree for any ruling to stand.

Term limits would be great but think of the attitude of a term limited jurist who is about to term out. Do you think his/her attitude might be “Screw them”? I simply do not know the answer except that Congress has the power and the only power to overrule the SCOTUS. It is not really overruling them it is passing a law that changes the decisions made by them. Then we have to look at the scum that inhabits Congress and ask ourselves “Do you feel lucky”? You know the answer and it ain’t good.

To steal from Terry Pratchett: Kennedy believes in one man one vote and he is that man.

This is more than a case of SCOTUS being unsound. SCOTUS is the way it is, and homosexual marriage actually made it there to be decided, because of left wing cultural aggression.

A huge slice of the population is intimidated into going along with them (no, not brainwashed, mostly). As long as the intimidation keeps working, we’ll keep seeing rotten judges like the ones who decided Obergefell and the Obamacare case (and Kelo and the other Obamacase case and so on).

“Society no longer is governed by “one person, one vote,” but by one person’s vote.”

Completely false. It requires 5 votes. That you are not sure how one of them will vote does not make it the decision of “one person’s vote”.

This is just silly. The point, obviously, is that decisions of profound consequence for many millions of people are being made by a margin of one vote (out of nine). And that one vote is often Anthony Kennedy, who knows that the direction of the culture may hinge, effectively, on his choice.

“This is just silly. The point, obviously…”

I’ll just reference the quote I put up:

“Society no longer is governed by “one person, one vote,” but by one person’s vote”

Yes, many decisions are made by one vote. Precisely why the number of justice’s are an odd number. No ties.

Get back to me when you complain of “winning” by one vote.

The President isn’t the King. No Associate Justice of the Supreme Court is the King, either.

The concept of “checks and balances” is clearly not working if the highest Court justifies its fiat with illogical drivel like Kennedy’s opinion. We can all (well, those of us who can read English, anyway) see that it’s claptrap. But we’re supposed to be stuck with it, anyway.

This is intolerable. An Intolerable Act—but this time from Washington rather than London.

Reagan was president. He tried to get Bork onto the Supreme’s. But Bork lost the votes in the Senate. So, Reagan sent in Anthony Kennedy. Who got 97 votes.

Now? It seems Anthony Kennedy is very mad he didn’t become chief when Rehnquist died. And, it was really Sandra Day O’Connor who mastered the art of the 5-4 vote. Because her vote was always up for grabs. Didn’t matter which side of the issue it was, she just wanted to have the opportunity to divvy up the writing assignments. And, her opinions became known for their “forks.”

Isn’t it possible the reputation of our courts has been going downhill, anyway?

Professor: How does the Judicial Act of 1789 enter into the question of how to deal with SCOTUS?

Plus, how might Congress limit SCOTUS on issues, given its defined right to determine what SCOTUS might review?

How does wise Latina Sotomayor even get confirmed?

Question #1: Policy-Making from the Bench

During a Duke University panel discussion in 2005, you made a statement that raises grave concern as to whether you believe that the role of a judge is a limited one. In that speech, you stated: “All of the legal defense funds out there, they’re looking for people with Court of Appeals experience. Because it is–Court of Appeals is where policy is made. And I know, and I know, that this is on tape, and I should never say that. Because we don’t ‘make law.'”

Though you claimed that you were not “promoting” or “advocating” the practice, it is quite clear, based on your flippant tone, which invoked laughter from the audience, that you were mocking the idea that judges do not “make law.”[1]

Statements from your other speeches support this interpretation. You have unabashedly embraced the idea that judges should not hold back when tempted to alter the law in order to address some perceived societal need: “Our society would be strait-jacketed were not the courts, with the able assistance of the lawyers, constantly overhauling the law and adapting it to the realities of ever-changing social, industrial and political conditions.”

And Kagan should be impeached, she testified that there was no constitutional right to gay marriage. She apparently lied so she cold vote in SCOTUS to overrule the people.

Justices have the sole privilege of recusing themselves, and there is no second opinion.

Impeaching a Justice for an opinion would likely set a very bad precedent, but it is merely an exercise in futility anyway. Removal requires 67 votes in the Senate.

Failed impeachments tend to backfire. Which would in turn lead to more Democratic wins, and ultimately to more bad judges. The best way to stop bad judges is before they take office. And the best way to do that is not to elect Democrats.

Remember most of the disappointing Republican appointees were chosen for cloudy records Democrats couldn’t smear. Stevens, O’Connor, Kennedy, and Souter leap to mind. Bigger majorities gives Republican Presidents more flexibility. With more Republican Senators, we could have been cheering for Bork instead of cursing Kennedy all these years/

Impeachment had become impractical almost immediately, but still, someone who lies to get on the court SHOULD be impeached. AS presented here recently, Democrats don’t lie, they “evolve”. But calling Kagan out for “lying” SHOULD put pressure on her, the same way the PCs pressure our politicized court now.

But the “wise Latina” (her words about how the court should indeed be a respecter of persons) was confirmed even with all those problems presented in my link. Why do Republicans need “bigger majorities” while Democrats always get dependable leftists without such majority? RINOs surrender to the PC religion and K street.

I agree with you that third party would be difficult, and I see taking back the party as the better route. But we also have to recognize that Republicans have been folding. They could have stopped Sotomayor (iirc), but you claim the problem is we didn’t elect enough Republicans to make the squishes more comfortable. I say we have to get rid of RINO R’s that fold like cheap suits, or were never conservative in the first place.

“We” the tea party, with help from others disgusted with Obama, gave R’s majorities, and they fold on everything, giving Obama free reign. Republican leadership needs to be held accountable, especially when they actually attack the tea party, the most vibrant side of the party.

That issue comes up this Tuesday in IL 18, where the Republican establishment is anointing LaHood, son of LaHood that was in the Obama administration. We are a heavily conservative district and Flynn from Breitbart has to fight the establishment R’s as they throw big money at their preferred Boehner rubber stamp.

So it’s a little rich for you to be telling me today we just need to give “your” RINOs even bigger majorities of RINOs, to sell us out even more. Instead I believe we need conservatives. Voting for the Chamber’s candidate just gives Boehner and McConnell more power to attack the base of tea partiers. The Republican Party is trying to force a RINO squish into our conservative district, throwing all their weight against the people having an open choice.

We have checks and balances on the Courts, we just don’t use them.

But the hysteria that “the Court has become a political branch” is amusing. Of course it is, it has always been so.

Those who think things are bad now should have lived through the Warren years.

In Mark Levin’s book, The Liberty Amendments, he proposes that SC decisions be reversed if the states vote to do so within 2 years of a decision. Of course, that’s something, but really, if a state adopts a state constitutional amendment, the SCOTUS should butt out.

My God, they think they’re gods up there! When I think of the things federal courts have nullified, it astounds me!!!! California kept adopting good laws, to keep the place AMERICAN, and the feds kept nullifying them!!!

Overall, the present majority of SCOTUS is creating bad unintelligible precedent with malice aforethought against God.

What we need FOR STARTERS is 4-to-6 impeachments.