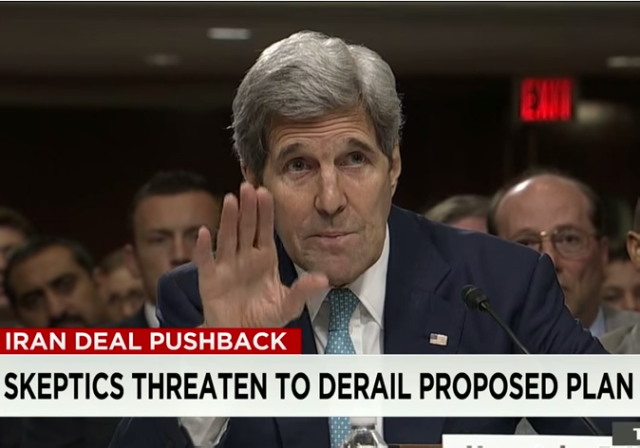 John Kerry testified before a senate panel about the awful Iran deal Thursday and was met by skepticism and derision from lawmakers in both parties. In a classic Democrat defense move, Kerry again tried to spin the issue and suggest it’s his critics who are being unrealistic.

Kerry to senators: No ‘fantasy’ alternative to Iran deal

Kerry told the Senate Foreign Relations Committee that there is no “unicorn” or “fantasy” alternative if the U.S. rejects the deal, which the administration maintains will keep Iran from getting a nuclear weapon but which many Republicans see as providing Iran a path to a bomb.

But Committee Chairman Bob Corker, a Tennesse Republican, said that the U.S. had been “fleeced” and that Kerry had “turned Iran from being a pariah, to now Congress being a pariah” in the course of making the agreement.

And Florida Sen. Marco Rubio, who is seeking the 2016 Republican presidential nomination, repeatedly warned that the next president could overturn the deal, which isn’t a binding treaty.

That CNN video cut off before you could see the best comment from Democrat Senator Bob Menendez.

If you watch the first seven minutes of the video below, you’ll hear a clearly annoyed Menendez say to Kerry, “I have limited time. You’ve been with the Iranians two years. I have seven minutes.”

When you’re done watching those videos, you may want to read Victor Davis Hanson’s take on all this at National Review. Here’s a sample:

A few years from now – after Iran has used its negotiated breathing space to rearm, ratchet up its terrorist operations, and eventually gain a bomb to blackmail its neighbors – the current deal will be deeply regretted. Expect a Nobel Peace Prize for Secretary of State John Kerry now, followed by Chamberlain-like infamy later.

It is all for show. Sadly, this deal is going through. Congress and Obama have agreed to an end-run around the Constitution with the Corker bill.

Many Senate Republicans enabled this treason (this is a habit with Kerry), including Corker.

I would really like to avoid the Chamberlain-like infamy, although I hope Kerry gets everything he deserves.

Sorry, but anyone spouting this nonsense is unqualified to negotiate with Iran over nuclear weapons.

I’m not sure if that jackass belongs in a loony-bin or in prison. Probably a prison loony-bin.

Have you actually SEEN the magical bean we got in exchange?

They’re quite beautiful if viewed in low-light setting with a soft-focus lens, quite ephemeral, in fact.

Plus, if we keep them in a warm, dark place for, say, 10 or 15 years, we’re told the resulting harvest from their germination will be explosive indeed!

Well worth the price, if you ask me, assuming you can appreciate all the nuances, of course.

No alternative plan? How about NOT releasing all the funds frozen in the US banking system and that of our solid allies? How about NOT lifting conventional arms embargoes? How about continuing to press the UN to continue with sanctions?

How about YOU SHOULD HAVE SUPPORTED THE GREEN REVOLUTION when you had the chance and you had the Mullah’s bracketed by US forces in Iraq and Afghanistan you moron? The Mullah’s would be burning in hell right about now.

How stupid do they think we are when they say shit like this? What a pathetic, traitorous liar.

In another universe the R’s would actually tell the truth, you sold out the USA. Pretending that Obama/Kerry are just poor negotiators is just an R lie to cover up the truth.

Pariah Kerry hits all the lowest notes of diplomacy.

In a speech today, Kerry told the unbelievable lie that he told an Iranian ayatollah that continuing “death to America, death to Israel” official chants was “stupid”.

To which, the ayatollah would have responded, “Shaddup beeyotch”.