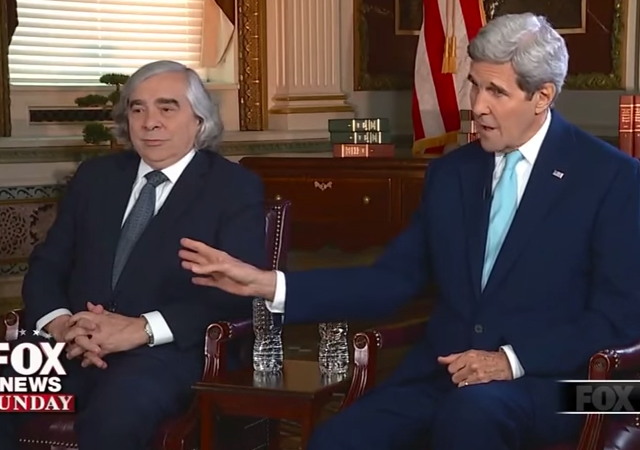 John Kerry and Energy Secretary Ernest Moniz appeared on FOX News Sunday this past weekend and answered questions from Chris Wallace on the terms of the Iran Deal.

Wallace focused on the 24 day lead Iran will be given for inspections, which Kerry suggested is perfectly acceptable. Moniz also clarified his earlier remarks on the subject.

Host Chris Wallace mentioned the 24-day period Iran can stave off inspections as part of the agreement and how that hardly constituted meeting those standards before Kerry rebuked him.

“Well, that’s not accurate,” Kerry said. “I never, in four years, had a discussion about anywhere, anytime.”

Like Rhodes’ statement, this contradicts earlier statements made by the Obama administration, and it also makes it painfully clear the White House never thought this extremely important verification measure was ever realistic.

President Obama, in April, said that the world would know if Iran cheated on the deal, and Wallace pointed out he said nothing about 24 days.

In the months leading up to Tuesday’s announcement of a nuclear agreement with Iran, American proponents and skeptics of the deal at least agreed on one thing: the importance of “anywhere, anytime” inspections of Iran’s nuclear facilities.

On the Obama administration side, there was Energy Secretary Ernest Moniz in April saying, “We expect to have anywhere, anytime access.” And Deputy National Security Adviser Ben Rhodes also in April saying: “In the first place we will have anytime, anywhere access [to] nuclear facilities.”

Yet in announcing the deal this week, President Obama said inspectors from the International Atomic Energy Agency “will have access where necessary, when necessary.”

Note the distinction: Agreeing on what is “necessary” is going to be a preoccupation of the new inspections regime.

And, of course, it is now no surprise that Iranians claiming the agreement stipulates things that are completely different than that the West claims. How could we possibly be surprised since we went through this absurd dance with the framework issue just a few months ago? This is becoming the diplomatic equivalent to the “bridge to nowhere”.

This is what kerry “negotiated”.

John Kerry’s ‘diplomacy’ is an enriched denial, a radioactive redaction of truth.

Notice what Kerry is saying “I Never Sought ‘Anytime, Anywhere’ Inspections in Iran Nuclear Negotiations” The “I” being the operative word. Meaning he can claim he never said it so that makes the entire ‘anytime, anywhere” inspection claims “debunked” in the eyes of the left.

I just hope this clown-car of an administration gets the historical scorching it deserves — assuming anybody is left alive to write that history after these feckless fools have done everything they can to further arm and empower every tyrannical group of crazies on the planet.

Kerry keeps providing the manure so it’s so easy……….

How about throwing him over the WH fence.

How ’bout HALF-way over the fence.

That would make 1 1/2 post-turtles in the Blight House.

Methinks Kerry is as big a liar as Obama. That’s my opinion based on facts, and I’m sticking with it!

Somewhere, sometime inspections might as well be no inspections, ever. When you give the other guy lots of time to dismantle or relocate offending actions, then you might as well give him a “get out of jail free” card. Only a naive group of negotiators would trust the other guy like this. And Kerry did not even start his negotiation with anytime, anywhere, so what did he expect to get in the end. He negotiated against himself by giving up the position before he even started, like posting a six run lead for opponents, before the first pitch is thrown. Remember Ronald Reagan who said “trust, but verify”. What happened to verify? Without anytime, anywhere inspections, there is no meaningful verification. Any administration that trusts the theocracy in Iran which hates us to keep its promises is either naive or treasonous.

“…is either naive or treasonous”

I would suggest it is naïve to believe they are naïve rather than treasonous.