“Like G. Washington telling his troops … to concentrate on making wax candles and apple cider!” 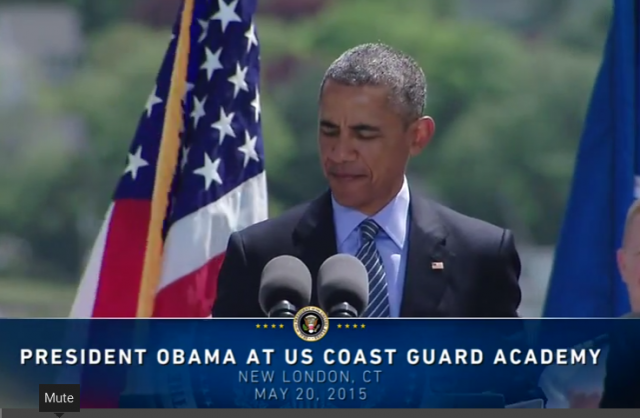 “I’m here today to say that climate change constitutes a serious threat to global security, an immediate risk to our national security, and – make no mistake – it will impact how our military defends our country,” Obama said.

He added that climate change deniers are negligent and derelict in their duties.

“And if you see storm clouds gathering or dangerous shoals ahead, you don’t just sit back and do nothing. You take action to protect your ship, to keep your crew safe. Anything less is negligence. It is a dereliction of duty. And so too with climate change. Denying it or refusing to deal with it endangers our national security,” he said.

For those of you want to endure the entire speech, here is the White House video:

There are so many perplexing aspects to these remarks, I hardly know where to begin.

Such a great deal of evidence refutes the climate assertions made by environmental activists (including expanding Antarctic glacial levels) that failure to question the premise is a dereliction of common sense.

Additionally, instead of offering inspiration and a reason to take pride in serving, President Obama projected hostility and fear. In contrast, former President George W. Bush set a much more uplifting tone in his commencement address at Southern Methodist University:

I know which audience I would have preferred to be part of if I were graduating!

Furthermore, Obama’s remarks leave me deeply troubled that President Obama is escalating the seriousness of climate change science ahead of some ill-advised executive order. Given the fact that Obama is issuing executive orders at the fastest pace in his presidency (an achievement in itself), I surmise that one focused on the environment might be issued in conjunction with Pope Francis’ much anticipated remarks to the United Nations.

But the most disturbing aspect of this address is that it shows the administration has lost perspective on what its military priorities must be. Fox News host Bill O’Reilly used the term “delusional,” and I would have to agree.

When it comes to Obama’s priorities, O’Reilly said the president should stick with the here and now.

“I mean it’s fine to want a cleaner planet. I do. And it’s good to explore ways to eliminate harmful emissions. Every sane person supports that,” he said. “But to tell a group of military graduates that climate change is a defense priority borders on delusion.”

O’Reilly said savages are bent on destroying America and the civilized world, “and the president is presenting climate change as a military priority.”

“That’s like George Washington telling his troops at Valley Forge to concentrate on making wax candles and apple cider,” he said.

However, it looks like other branches of our government have a better perspective on the relative threats to the nation. The CIA is ending its main climate research program, known as Medea, which allowed civilian scientists to access classified data—such as ocean temperature and tidal readings.

“In my judgment, the CIA is not the best lead agency for the issue; the agency’s ‘in-box’ is already overflowing with today’s threats and challenges,” [Rolf Mowatt-Larssen, a 23-year veteran of the CIA] said via email. “CIA has little strategic planning reserves, relatively speaking, and its overseas presence is heavily action-oriented.”

Our Coast Guard cadets can at least take comfort in knowing that some people in our government are grounded in reality. It’s just too bad it’s not their Commander-in-Chief.

The Russians are building record-breaking nuclear-powered ice breakers for the ice-free sea that Obama fantasizes about.

But I don’t see Barracula’s ditherings about Gorebal Climate Thingy as mere ramblings of a delusional ignoramus.

Cognitive dissonance is a powerful uck fuping device in the Gas Lighting sense. He is continuing his campaign of demoralizing our uniformed services, and rewarding compliant officers.

obama’s war on the US military is just part of his intentional war on all long-standing American institutions and principles.

Perhaps the ultimate inviolable law of nature is that nature abhors a vacuum. It must fill it with something. Anything. What most Americans believed for centuries, Americans no longer believe, and the substitute is climate change religion. It has nothing to do with science. Nothing to do with facts. Nothing to do with critical reasoning. But it has very real and substantive effects. Those of us without access to natural gas, forced to heat our homes in the winter with fuel oil, find it impossible to warm their homes. Aside from hunger, chronic cold is the worst misery, caused by climate change fanatics like this President. Thank you, Democrat voters.

Our C&C is a sorry slop slinger.

Many high ranking leftists see “global warming” as the manufactured crisis they need to carry us through to global initiatives, global taxes, global power … all running trillions through their grubby fat fingers.

The last nonsense I saw, they were worried that the dessert areas that are turning greener from the CO2, means less dust blown into the ocean. Sounds good, right? But they worried that means fewer nutrients for plankton or something. But of course if nutrients come from farms, that’s bad. But wind erosion is somehow good.

They are schizo … but really it’s all a coordinated scam. They don’t care how much damage they do, they just want to keep their cover story for why they are driving up energy costs and taking control of industry.

Strawberry Shortcake, that’s how my sixth grade teacher taught us to remember deSSert. But it doesn’t work if I don’t do preview to review what I wrote. ha I meant desert, not dessert.

Looking of the word in Webster’s……

Yelp. There’s their pictures along with the Great Zero’s!

Chicken Little is saying that the sky is falling! Ooooh, help, what do we do now?

Well, for me, for right now, nothing! Yet, I shall use my smile as my umbrella! Ever onward!

“Global warming” is just another Obama critique of the U.S.. The fact that he adressing future military leaders with unsettled science nonsense is Obama’s repudiation of military means to peaceful ends. Howard Zinn and Noam Chomsky, both benefactors of Amerca’a military presence would be proud of their proxy Marxist.

My guess is that we are likely going to be faced with Obama’s obnoxious climate fear mongering at least until the global elites have their stupid climate conference in Paris beginning at the end of November.

I say “at least” until then because John Podesta is Hillary’s campaign chairman, and he is a fanatical environmental zealot. I think Obama may be laying the groundwork for Podesta to make climate change a major campaign issue for Hillary.

So we’re likely to hear emotional, fear-based climate rhetoric from now until the election.

Also, don’t forget, the elites have already promised the developing world $100 billion a year of our money beginning in 2020 to combat “climate change”. The only way they can make good on that is to borrow the money from China, then give it back to China so China can use it to combat climate change. That is absurd even to a second grader. So they are either going to have to confiscate more of our money via taxes so it can be redistributed to wealthy people in China and India, or renege on the deal. This incessant climate fear mongering is meant to make raising taxes more palatable.

Raise taxes to redistribute it to politically connected, wealthy Asians in exchange for a promise of nicer weather a century from now.

So those of us who disagree with Obama are a “national security” risk?

The Boy King’s Self-Parody is beyond pinheaded and spittle provoking. This is the same loathsome twit who golfs, fund raises and perpetually campaigns while the Mideast BURNS. My
God, Your Infantile Majesty, have you, Sir, No Shame?? In Koolaid Obamaland, this Climate Snake Oil MUST, MUST, MUST be addressed immediately…But, Iraq..? Never mind…Right?

He has a consensus (i.e. social/political agreement) and numerous, divergent models liberally correlated with reality.

That said, Obama is pro-choice. He is unprincipled. Once he characterized human life as a product of spontaneous conception, and that premeditated murder could be committed for trivial causes (e.g. welfare), it was a small step to exploit inference (i.e. created knowledge) and circumstantial evidence to corrupt science through wild (and frequent) departures from a limited frame of reference in both time and space.

He’s not delusional at all, but quite clear in his intent: ‘global warming’ is the fascist left’s Reichstag.

People who believe he is sincere are delusional.

It was likely General Benedict Arnold who told Washington’s troops to concentrate on making wax candles and apple cider.
http://www.history.com/this-day-in-history/benedict-arnold-american-traitor-born

When sanity returns to the democRat and Republican party – when the likes of Crazy Pelosi are backstabbers Boehner and McConnell die off or are booted out of office – “Barack Hussein Obama” will be remembered as a traitor dwarfing Arnold in scope.

McTurtle and Boehner won’t fare too well either: their names will be synonymous with ‘Neville Chamberlain.’

He’s just doing what failed authoritarian figures have always done — come up with distractions from his failures. I mean the failed economy, the failed foreign policy, the failure to deal with his loss of everything we invested in Iraq and Afghanistan, and the increasing terrorist threat. Anything except the real problems.

C’mon, Mr.Prezzie, you can buckle up that VTC* and expose yourself to the unaccustomed horror of critical thought.

Delusional? I think not.

The “climate change” scam is just a handy excuse for someone who wants to fundamentally transform what’s decent in the world to something else entirely.